3 Kitchens and a Chef

3 Kitchens and a Chef 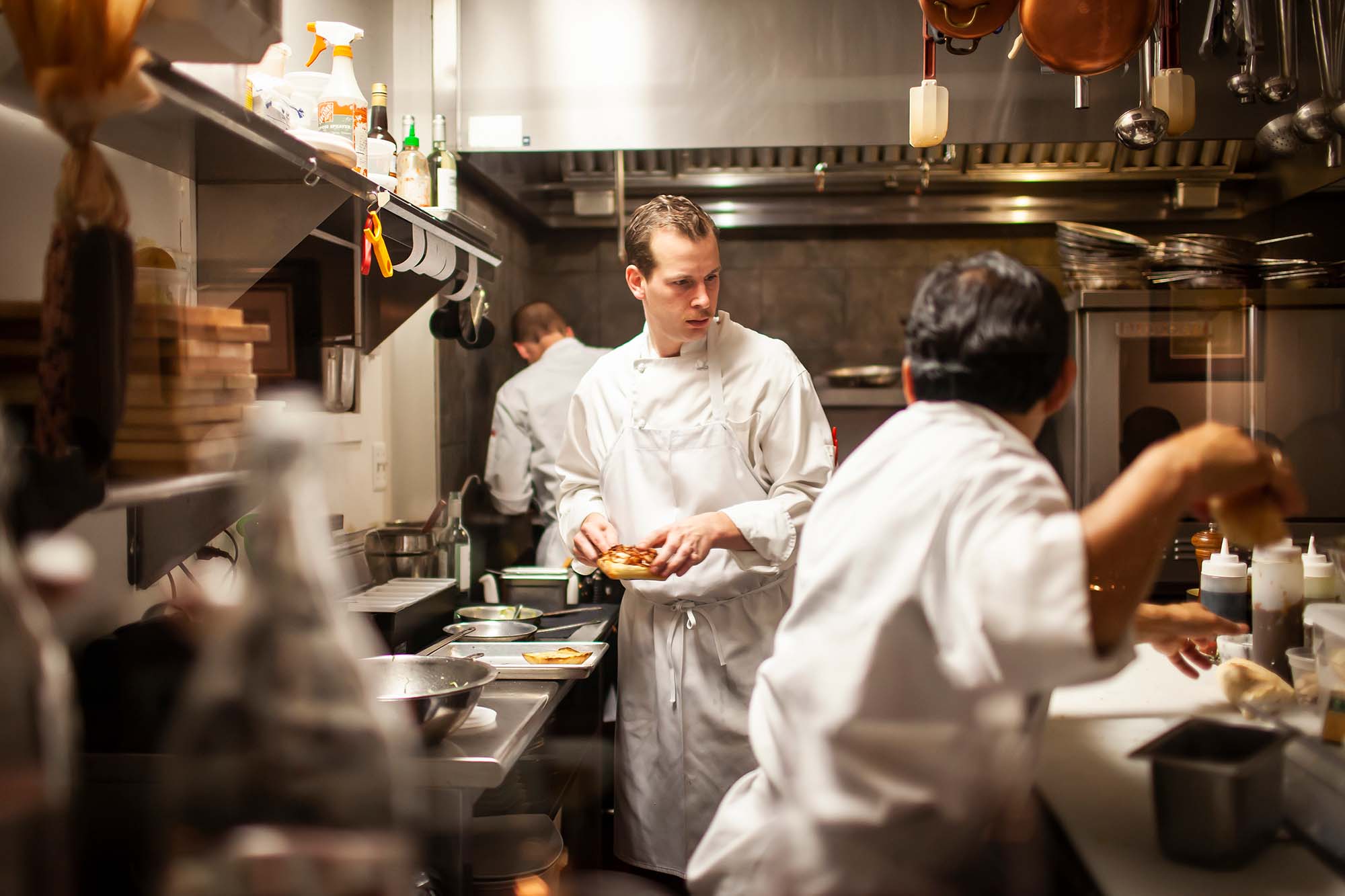 A Connecticut native, Chef Justin Moore ventured West after high school to attend the Academy of Art in San Francisco. He later changed schools and enrolled in the California Culinary Academy, an affiliate of Le Cordon Bleu, where chefs were trained using the European education model. In 2011, he co-founded Vin 909 Winecafé, which makes its home in a 1930s Sears Roebuck mail-order catalog house, and where he sources local ingredients to prepare inspired small plates and inventive pizzas from scratch and pairs dishes with fine and rare vintages. 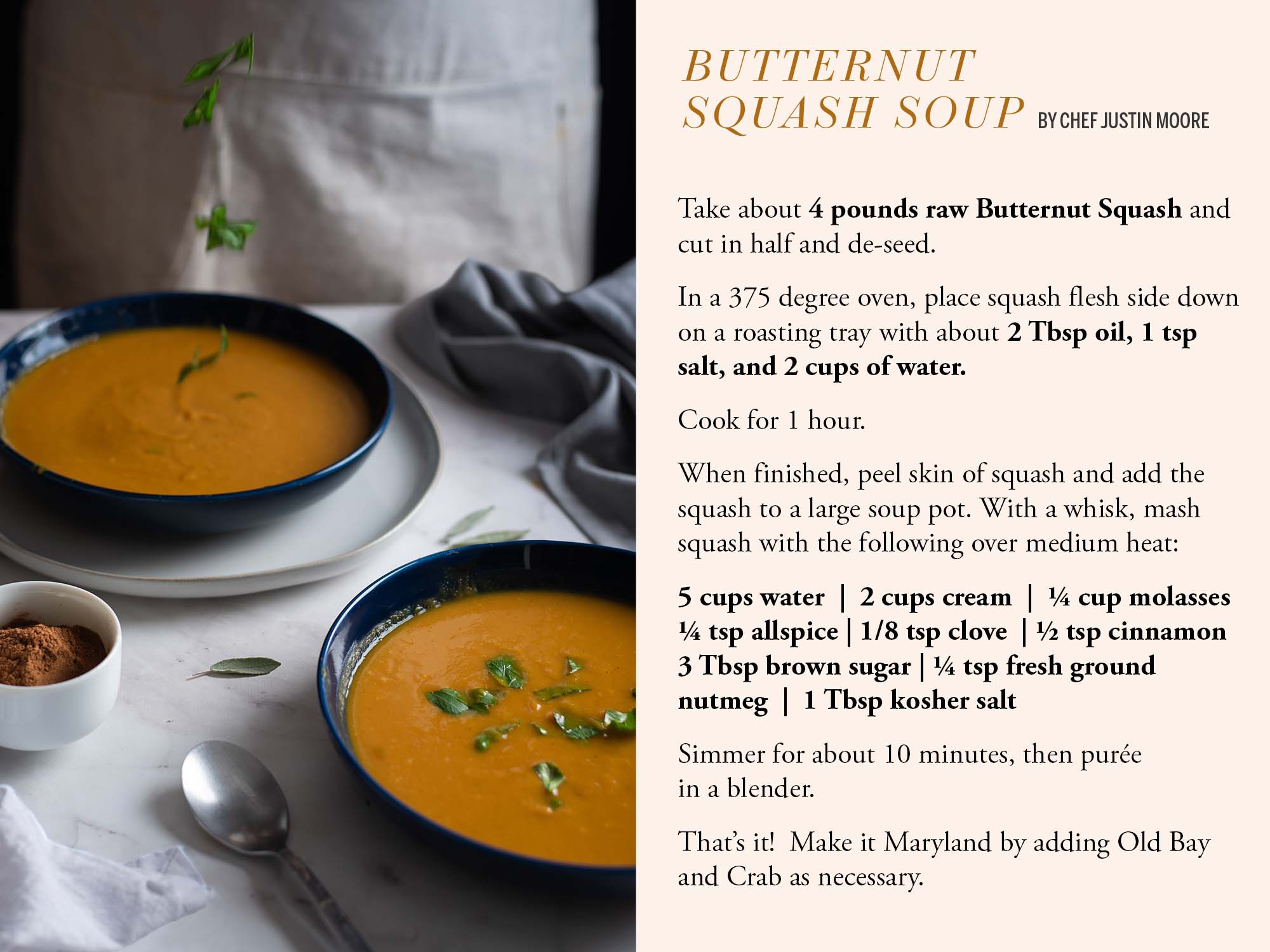 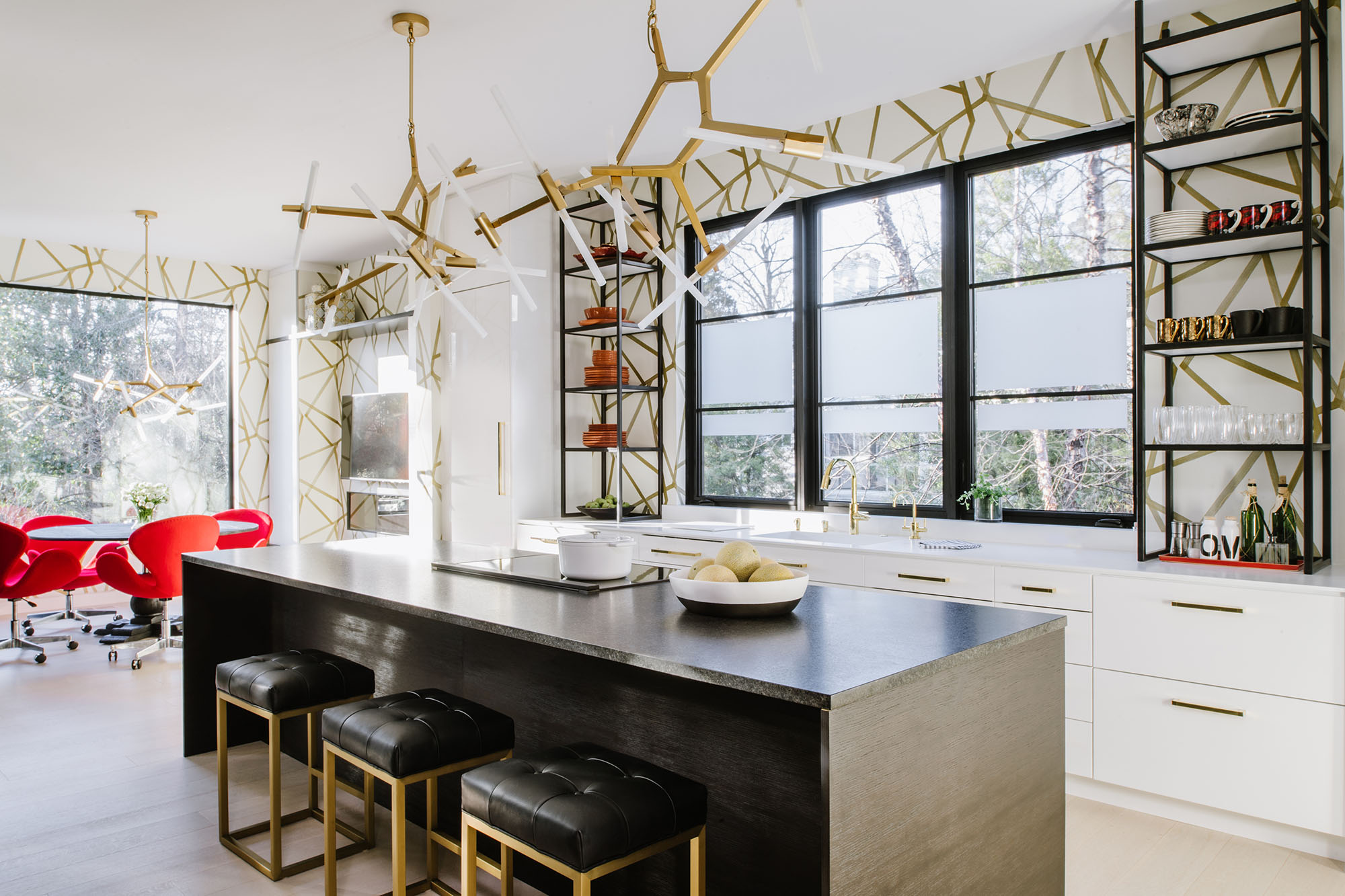 No two people are alike. The same goes for kitchens; at least, that’s what Sarah Kahn Turner of Jennifer Gilmer Kitchen & Bath believes. She wants to meet her clients’ needs in a way that’s not only functional, but also interesting to look at.

In many ways, this kitchen is an extension of the home’s exterior, which is clad in Japanese Shou Sugi Ban wood with metal windows. Shou Sugi Ban is an ancient Japanese architectural technique in which wood is preserved by charring its surface with a hot flame. After the wood cools, the surface is scraped clean of soot and debris. Finally, the boards are finished with oil.

The kitchen began with the bar. “They wanted a bar, but not an open one in the living room; they still wanted it to feel fancy and have a touch of glam,” she says. Created with Shou Sugi Ban, it is one of the kitchen’s most dramatic features. Its dark color contrasts vividly with the kitchen’s almost pure white countertop. “You have the juxtaposition between the black anchored wall in the middle—which has the dining room on the other side—and then this sort of light, breezy, white, shiny perimeter,” Gilmer says.

She also points out the brass on the chandelier and the cabinetry handles. “It was a warm finish against the white and the black that felt sort of fresh,” she explains, adding that the light fixture was “a fun play on what was going on with the wallpaper selection.”

Across from the bar, the white countertop stretches out under broad windows, flooding the space with natural light. Open metal shelves that repeat the windows’ metal trim flank the counter. Strong colors in a small space may be overpowering, but not in this case. “What ties it all together is the use of the same materials. It doesn’t feel like we’ve created separate vignettes,” says Kahn. 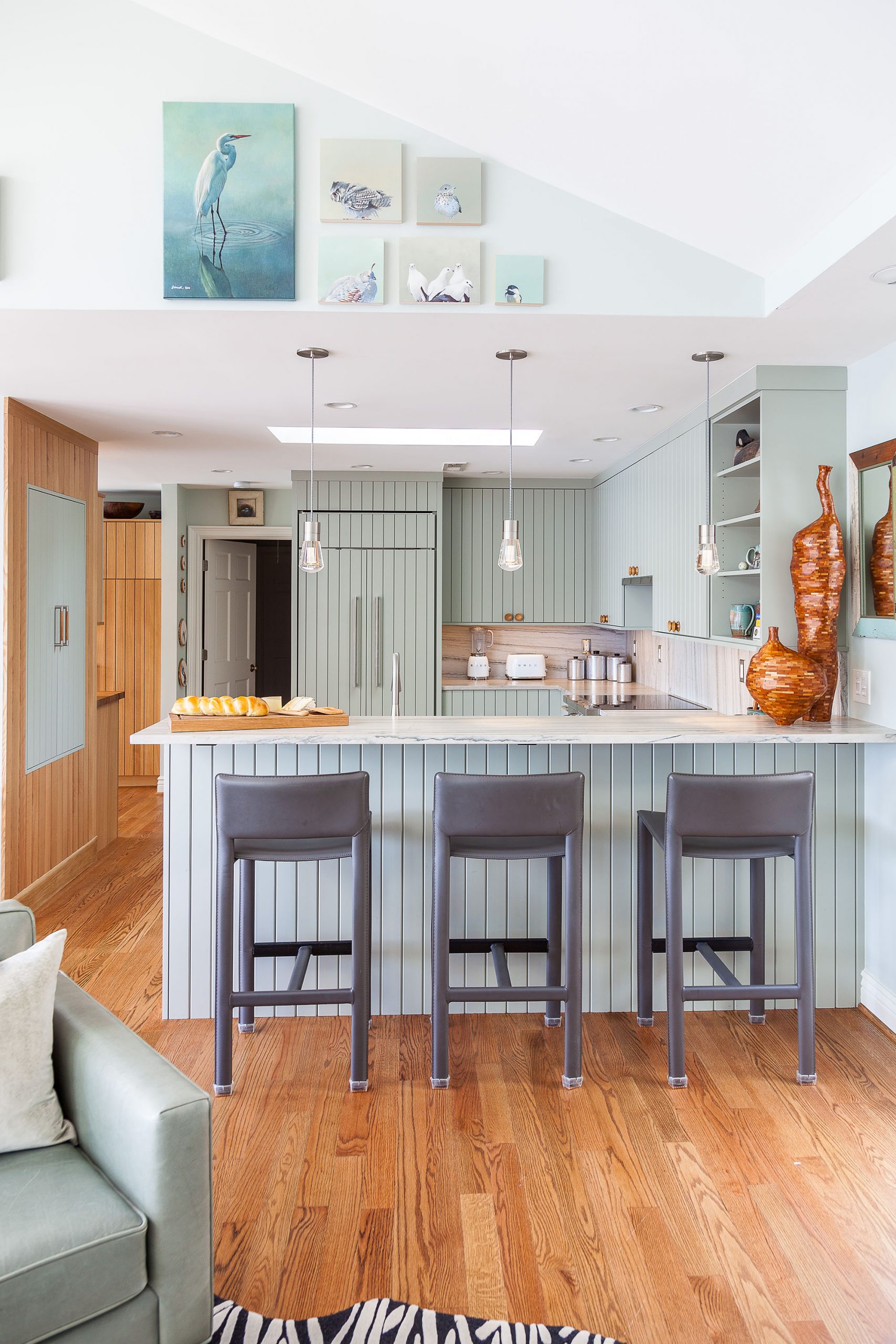 Past generations might have used the kitchen just for cooking, but that’s definitely not the case today. And when Krissy Klingenberger of Kitchen Encounters first met with her client to design a new kitchen for their home overlooking the Severn River, her client said, “I want a kitchen that doesn’t look like a kitchen.”

So Klingenberger used art and nature to create a room that looks and functions like the hub of the home – a place where it’s easy to prepare a dinner party with friends or brew a cup of coffee, but also a place for work-from-home sessions or watching TV. Because the existing layout was already highly functional, Klingenberger didn’t have to change anything structurally. Bucking the ubiquitous  “kitchen island,” she designed a peninsula instead, which works well in two ways: it leaves plenty of room for moving around among the stove, sink, and fridge, and it creates a nice divider between the kitchen and living room in the home’s open floor space.

“Although islands are a popular request, in a more limited space, I would consider adding a peninsula, as in some cases it can create improved functionality, providing additional countertop space and cabinet storage as well as better ease while working,” she explains. The raised countertop on the eating side of the peninsula creates a clear distinction from the prep side and serves to hide any mess that might need to be hidden while hosting.

Seafoam green and natural wood are colors drawn from nature, giving the space something Klingenberger describes as a “minimalist Scandinavian River house feel.” It merges peacefully with the river view from the bay window that was originally designed as a breakfast nook but now serves as a home office. Other subtle elements include the quartzite countertop and backsplash, both of which look like flowing water. “Everything emulates nature in some way,” Klingenberger says.

The cabinets, made of painted maple and accented by natural oak, have v-grooves that offer texture and dimension. Because the grooves are evenly spaced and aligned, they disguise the cabinet doors, so they almost look like wall panels at first glance. They’re natural and organic but still interesting to look at. The even spacing of the grooves was difficult to achieve, according to Klingenberger, but the effect is worth it: the grooves are minimalistic but still an architectural focal point.

Even when working in the kitchen, one can interact with others in the main living space. And when visitors help out in the kitchen, they can enjoy the sights of the river or the owner’s extensive art collection. It’s a space that definitely escapes the feel of a traditional kitchen; instead, it’s a place where host and guest can feel right at home. 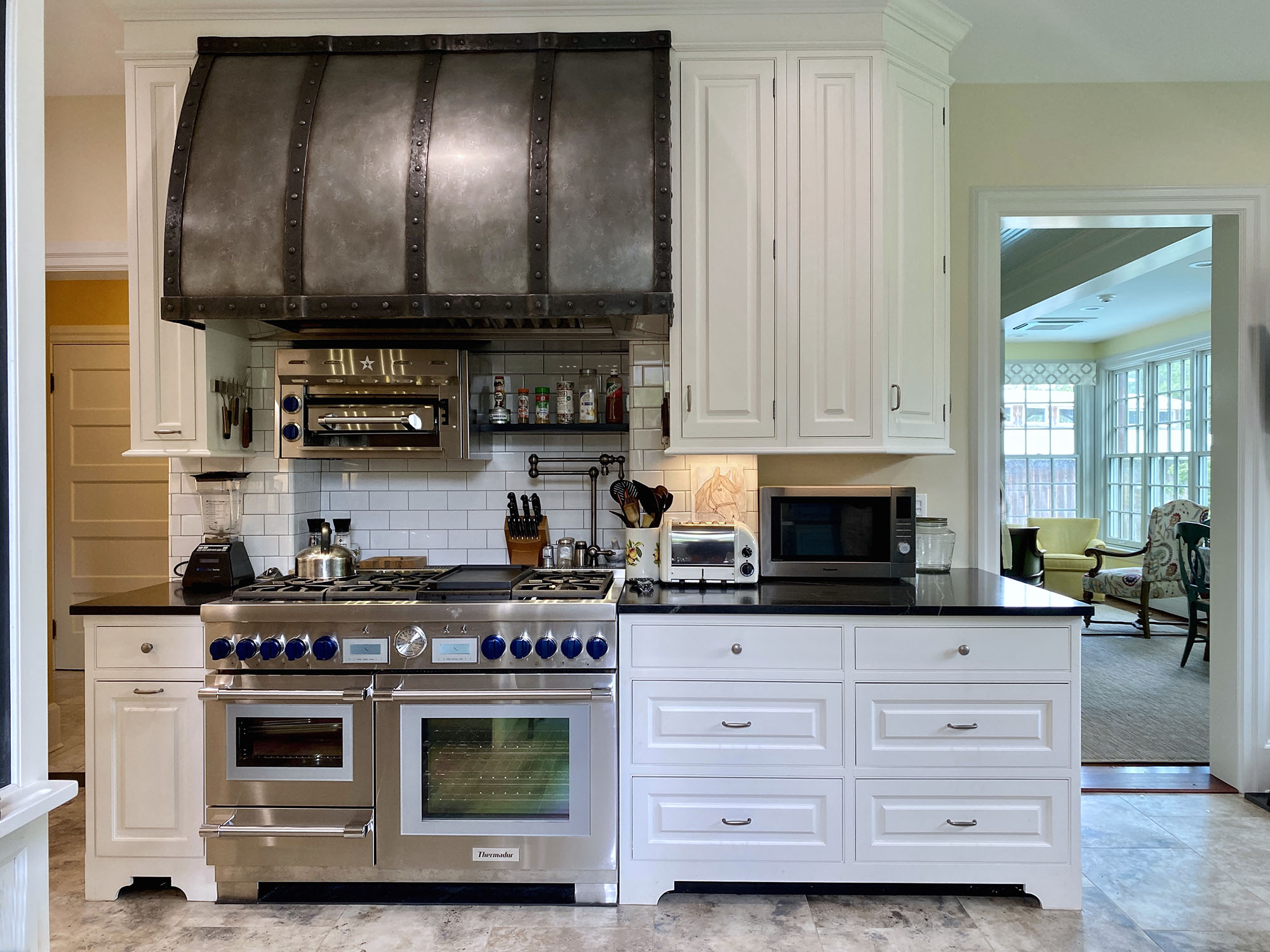 Traditional doesn’t have to feel old or outdated – and when it’s done right, a traditional style will stay fresh today, tomorrow, or even ten years from now. That was the concept Joni Zimmerman of Design Solutions kept in mind when she started work on a kitchen that was the last major project in the restoration of a historic home.

“We needed this entire kitchen to feel as if it existed in this historic home the way it would have years ago,” Zimmerman says. “It needed to feel authentic to the house.” To accomplish this design goal, Zimmerman incorporated materials from the original house in innovative ways as well as “little personal elements” that make the design true to the home’s past.

The kitchen’s range was built into the area that was the home’s original fireplace, and the wood countertops were made from a walnut tree that was cut down on the property. Even the light hanging over the kitchen table was something the owner saved so it could be repurposed.

But perhaps the most unusual use of the home’s original elements is the writing board on the side of the refrigerator: a slab of original slate from the property, now embedded into the wall panel.

Zimmerman had to get creative with the layout of the kitchen because after carefully considering the obvious choices, none emerged as very practical. Case in point: the location of the sink. The sink’s “default place,” as Zimmerman describes it, is usually under the window. “We looked at that, but because of the room layout and where all the other functioning areas of the kitchen needed to be, it created a very uncomfortable working environment,” she says. “It wasn’t conducive to efficiency for cooking and cleanup.” So she flipped all the kitchen’s major pieces around. The new arrangement for sink, range, and fridge encourages intuitive interaction.

The kitchen gets a pop of color from carefully placed blue elements, including the knobs on the drawers and the cabinet that dominates one of the kitchen’s walls. Zimmerman explains this is because blue is an accent color the owner uses throughout the home, so it fit in naturally with the kitchen. The blue cabinet is so large that little blue was needed elsewhere in the room besides accents, she says.

By respecting the historic aesthetic of the home and not allowing any element of the design to get too contemporary or too trendy, Zimmerman expects the kitchen to age well, along with the rest of the historic property. That’s why integrated design always feels right, she explains. “Because it belongs in this house, it will never go out of date.”