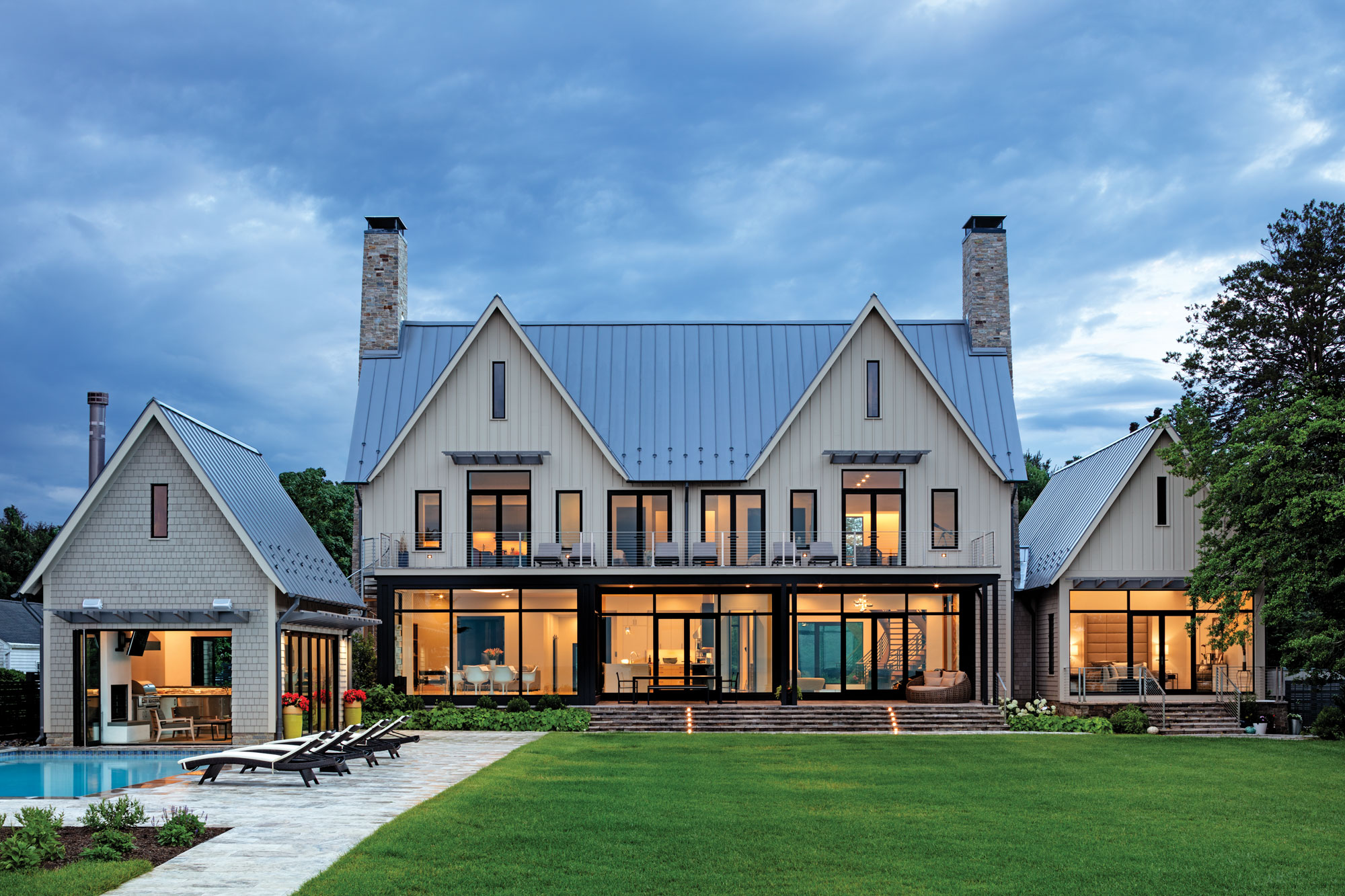 When a group of diverse, fine professionals work together, sparks will surely fly. For this project, the homeowners, along with an architect, an interior designer, and a builder ignited a fire of creativity that forged a one-of-a-kind waterfront home in Annapolis. “It was a collaborative effort from beginning to end,” says one homeowner, who, with her husband, worked hand-in-hand with architect Devin Kimmel, interior designer Catherine Lowe, and builder Raymond Gauthier, owner of Lynbrook of Annapolis.

The couple wanted to trade in their woodsy lifestyle for waterfront living. The two-acre property they found sits at the confluence of the Magothy River and Chesapeake Bay. An existing 1920s-era home in very poor condition was taken down “piece by piece,” and replaced by a dramatic three-story, four-bedroom, four-and-a-half-bath mahogany and cedar-shingled house that also includes an in-law suite. A new swimming pool and pool house were constructed, and an existing outbuilding was repurposed to become a crab shack. 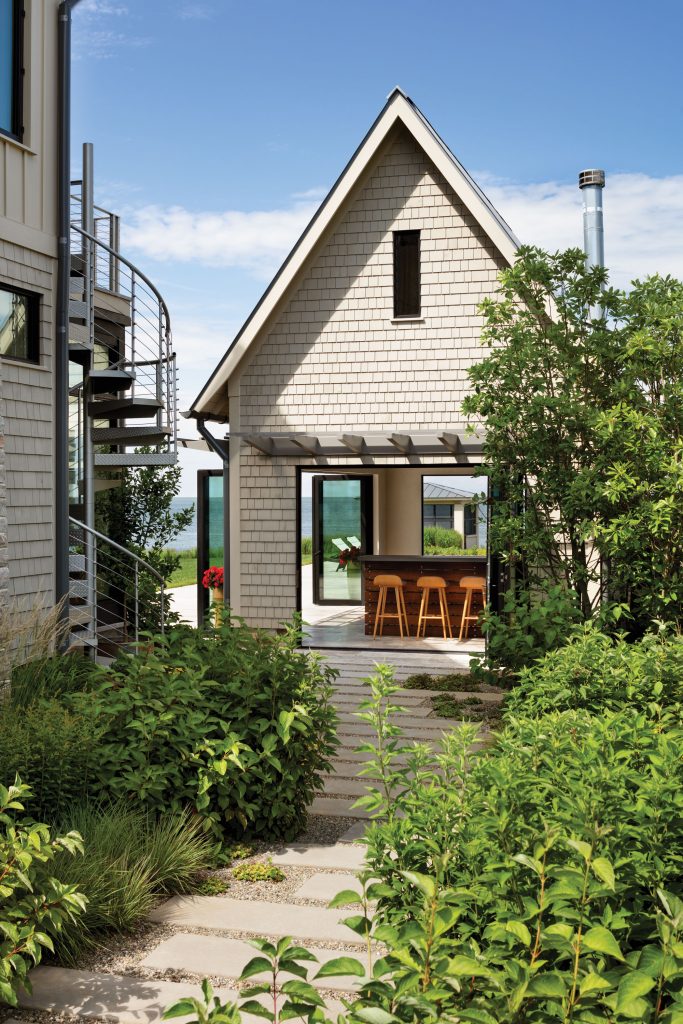 The home’s architecture, which Kimmel calls “Tidewater Modern” loosely echoes elements of the Shiplap House in historic Annapolis, notes Kimmel, who often finds inventive ways to reference local history in his work. Shiplap House is a pre-Victorian residence, circa 1715, located on at the end of Pinkney Street near City Dock. One of the oldest surviving historic structures in Annapolis, it has a pitched roof, plain façade, and a fireplace at its gabled end.  Kimmel retained elements of the pitched roof, gabled end, and chimney, but “pushed it up a bit,” creating a taller building. Instead of traditional double-hung windows with muntins, he opened up the back with 48 feet of glass, eight feet tall.

Like a traditional Tidewater residence, the home is surrounded by working land, or in this case, gardens. These unwind like a strand of pearls, and loosely circle the property, beginning with the entrance gate and ending at the pool overlooking the bay.

This is not unusual for Kimmel. An architect and landscape architect, he approaches the project as an organic whole. His mindfully curated “garden rooms” have invisible thresholds and begin at the far end of the driveway. Semi-formal plantings give way to a meadow garden that transitions into an edible garden, with fruit trees and berries. A vegetable garden with a greenhouse continues along the side of the house. There is a summer garden on the home’s south side and, finally, a lush pool garden with sparkling views. Like a true modern Annapolis home, it has a crab shack and water access. “It’s right on the edge, you can smell the Bay,” says Kimmel.

The entire team met every two weeks throughout the two-plus year project to make sure that “no stone was unturned,” says Gauthier. “We work together throughout the process so that all expectations are met.” There were several construction challenges, says Tobin Poole, who served as the onsite project supervisor, such as having to do a “dry layout” before installing the massive first floor granite fireplace, and dealing with a cold, snowy winter during which an enormous oak tree fall into the swimming pool—“that was interesting,” says Poole—but nothing was insurmountable.

Clean, uncluttered spaces reflect the wife’s love of architecture and the husband’s optical engineering background.  The spare design thoughtfully highlights carefully selected works of art and crafts—many purchased during outings to the American Craft Council’s annual show in Baltimore. Also prominent are “space-age” materials such as cold-rolled steel and four expansive slabs of Fantasy Brown granite that surround the gas fireplace in the living room.

Lowe chose a neutral palette of white, gray, and taupe so as not to compete with the landscape. However, the striking furnishings may do just that. These include a Mies van der Rohe bench, Holly Hunt sofa, Eero Saarinen tulip table and chairs, and art, such as a sumi-ink still life study by Julie Keaten-Reed.

“We wanted to combine the classics of modern furniture with mid-century design,” says Lowe. “The house is a homage to what the owners do and reflects the essence of who they are.”

The kitchen, designed by Melissa Sakell of Kenwood Kitchens, serves as a center for the main floor. And it possesses clean lines and an open plan that Sakell describes as “California Contemporary.”

The homeowners credit Lowe for “reining in” their many ideas, and architect Kimmel for “elevating” their style. “We would have been lost without them,” says the wife. “They helped us focus.”

One of the showstoppers in the home is the curved white oak and iron staircase in the entryway, designed by Kimmel and built by The Stair Guys. “It’s a work of art itself,” says the wife.

The couple say they wouldn’t do anything differently when it comes to their new home, which took approximately two-and-a-half years to complete. The peaceful location and cohesive design have given them space for their own pursuits, such as gardening, and the ability to welcome their many guests (they’ve even hosted a wedding there). The time each professional devoted to this endeavor was well spent. With its spare, disciplined beauty and rare perfection, this home’s creative fires continue to burn brightly.