A Quintet of Quotable Kitchens 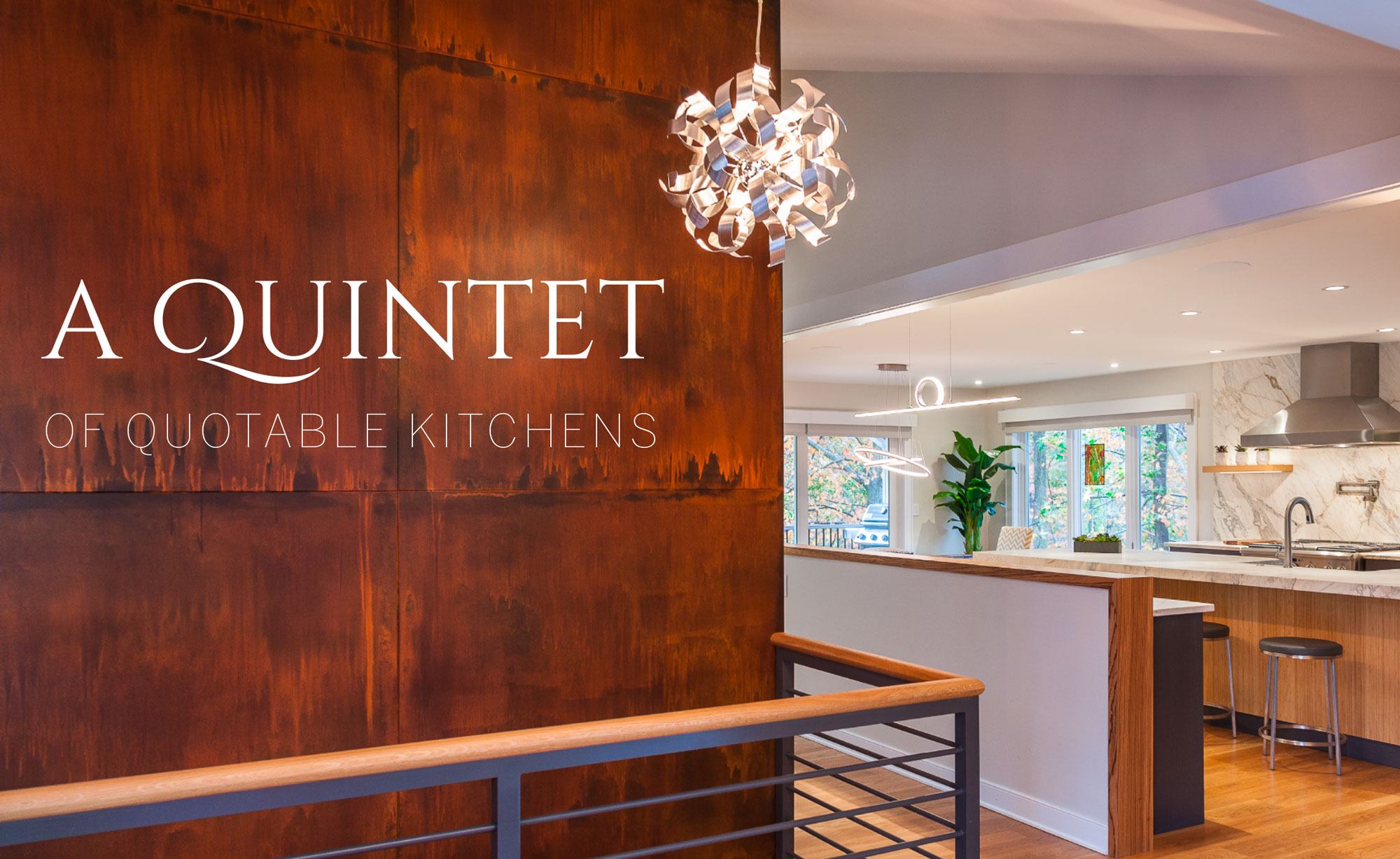 There’s no place in the home quite like the kitchen. From it springs a source of daily sustenance. But in most homes, the kitchen means so much more. It’s often a favorite meeting place—even if the gathered crowd must hover around an island or sit on stiff-backed bar stools as opposed to sinking into a living room sectional. And in this unprecedented period when the comfort and security of one’s home means more than ever, it’s no wonder that creating the idyllic kitchen has become such a popular undertaking. Here are five kitchens sure to inspire. 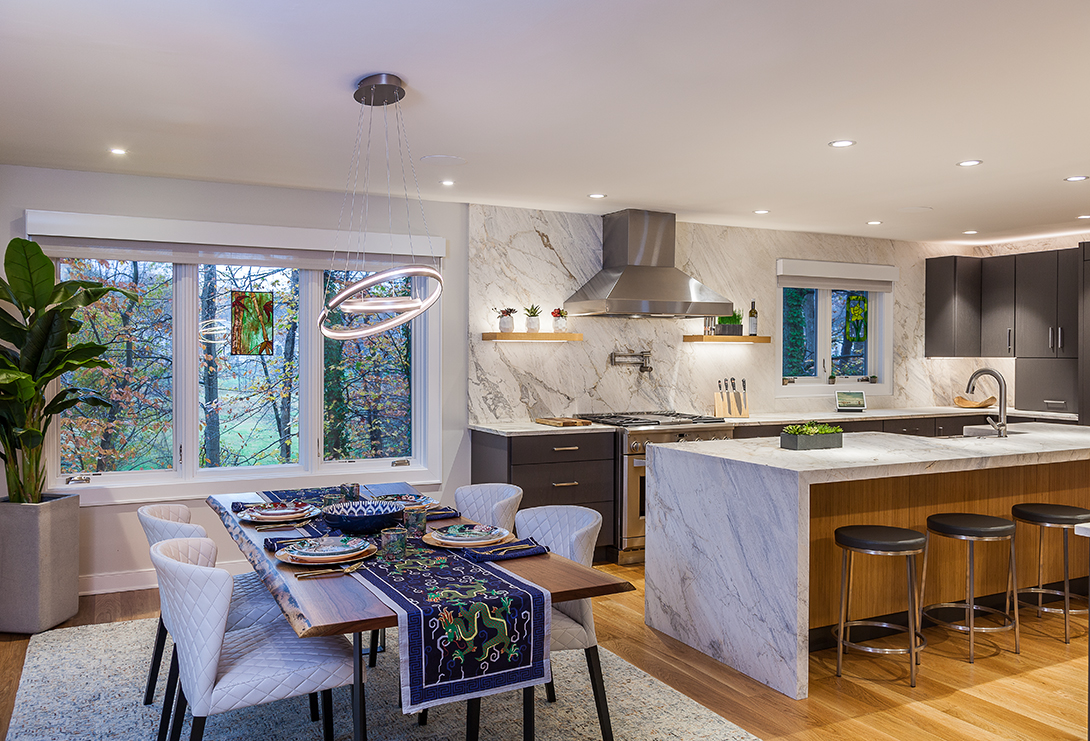 “What sets this kitchen apart is the attention to detail…”

“Kitchen of a lifetime.” That’s how Ryan Deshaies, Annapolis-area electrical contractor, describes his vision for a complete overhaul for the kitchen in his Annapolis condominium, originally built in 1981. Working daily in his clients’ kitchens, Deshaies says the urge to create a dream kitchen for his wife and himself grew. The couple’s intentions were clear. But, initially, at least, their vision wasn’t.

A key challenge—how to make a pre-existing support-beam seam tie into the new kitchen design—was resolved after brainstorming with Mark White of Kitchen Encounters. They created a “dividing island” with a knee wall on the backside: a solution that delineated the living room from the kitchen, while still allowing for an open floor plan.

For clarity, the team leaned on the input of many members of the Annapolis Design District. Initially struggling to choose a cabinet finish and stone selections, the couple met with Lisa Tullai of Annapolis Interiors. She suggested Monticello marble for counters and island.

With a desire to have “clean and contemporary” dominate their newly-designed kitchen, the couple utilized a lot of hidden storage in the re-do, including a microwave and drawers for organizing (and hiding) dish storage. The dramatic and luxurious full-splash marble backsplash, which weighs between 350 and 400 pounds and required five men to install, contains zero receptacles. Instead, they’re all hidden and integrated into the floating shelves, as is the cabinet lighting.

“What sets this kitchen apart is the attention to detail in every aspect of the design,” said Deshaies. “This project was not rushed and we used our resources to the fullest extent to give us the kitchen of a lifetime.” 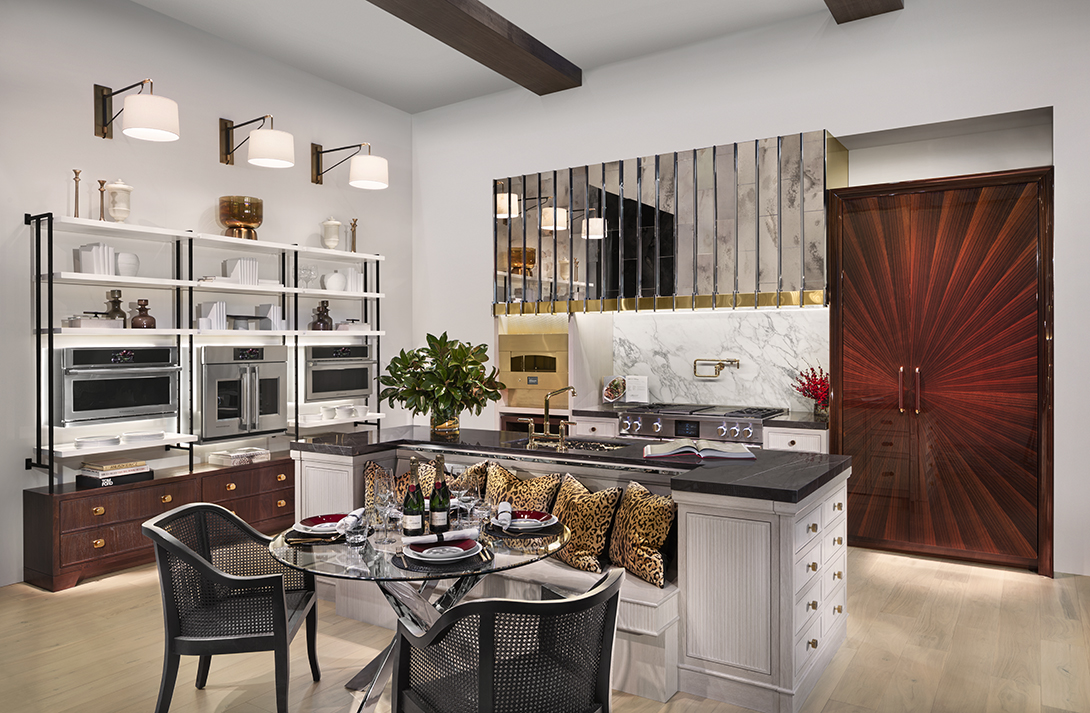 “I would never say white is dead, but I think
there are other things people are opening up to.”

For Richard Anuszkiewicz, creative director of Monogram Appliances and lead designer of Design Galleria Kitchen & Bath Studio, cultivating a beautiful space is never about the latest fad. “I don’t live by trends,” he says. “I try to be as forward-thinking as possible.”

And in the case of his kitchen designs that recently earned him the title of Best of Show at the Kitchen & Bath Industry Show in Las Vegas, that meant making people see the kitchen in a different way. “The kitchen has always been the heart of the home, the center of interest or activity,” he explains. “It’s a lot more multipurpose today than ever before, so I believe in expressing those rooms like living room spaces.”

He achieves a balance of aesthetics and function by emphasizing integrated appliances. When a refrigerator has matte brass doors with leather-stitched handles, it’s not just a big box for keeping food cold—it’s part of the décor. Anuszkiewicz aims to be mindful of each appliance that features in the kitchen design. “They fully integrate into their environment, and you don’t necessarily know that’s a refrigerator or a microwave,” he says. “We always conceal items. In my mind, I wanted this to feel more like furniture.”

Another aim is to create spaces where people feel comfortable enjoying themselves for extended periods of time—it’s why one of his designs features a kitchen table that backs up to a banquette built into the kitchen’s island. The idea is to encourage people to sit back, relax, put phones away, and enjoy a conversation.

While Anuszkiewicz doesn’t necessarily see anything wrong with the classic white kitchen, he sees more and more homeowners interested in using rich materials and bold colors in their kitchen. “We are seeing a resurgence of wood and colors and a lot of things other than just white,” he says.

For anyone who has a traditional white kitchen but is looking to add the glamor of a contemporary kitchen, Anuszkiewicz encourages finding a designer who knows which complementary elements will enliven it.

“I would never say white is dead, but I think there are other things people are opening up to.” 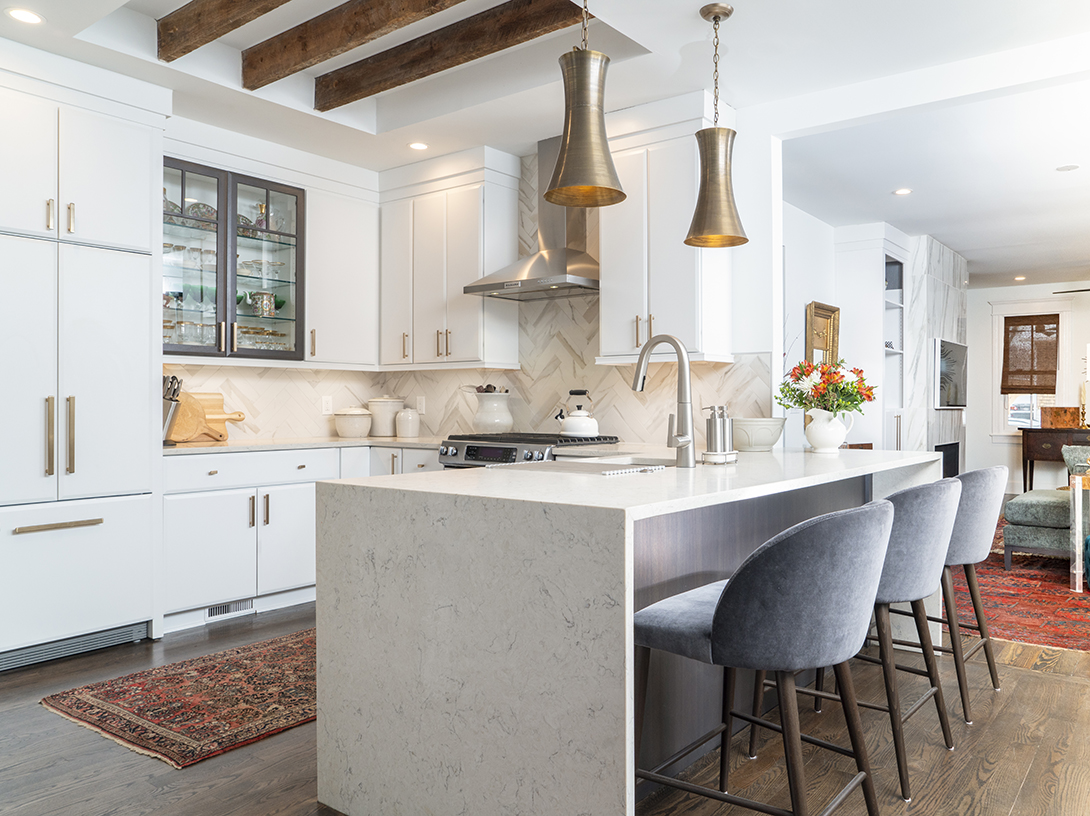 “Sparks are flying.” That’s how Annapolis-based designer Gina Fitzsimmons describes the chemistry that takes place when she and her long-term client brainstorm—most recently when designing the renovated kitchen in her nearly 100-year-old Eastport farmhouse, Birch Breeze.

Starting with a clean white base, the renovation added multiple modern touches of flare while maintaining the warm and cozy feel of this rustic, historical gem. There are the rich walnut accents under the peninsula and on the countertop and the doors of the glass cabinet. Also eye-catching are the mid-century modern pendant lights over the peninsula. Spun out of bronze and brass, the curved cylindrical lights are etched in circular rings, with a deep bronze patina.

Some pre-existing features were left alone or brought to the forefront. For instance, floor joists in the kitchen were exposed. The old chimney, exuding what Fitzimmons calls its “crusty texture,” stayed. In some cases, an intentional juxtaposition of historical and modern creates a desired effect.

To an extent, Fitzsimmons drew creative inspiration from pre-existing remnants among the owner’s accessories. The color scheme, for instance, came from a modernist oil painting over the sectional in the living room (Jon Engilberts, an abstract expressionist from Iceland, 1908-1972). Primary colors were pulled from the painting’s pots and bottles.

The overall effect of the thoughtfully renovated historical kitchen is, at once, one of awe and comfortable familiarity, befitting this extra-special historical home.

A Dream Kitchen and a Labrador Lounge 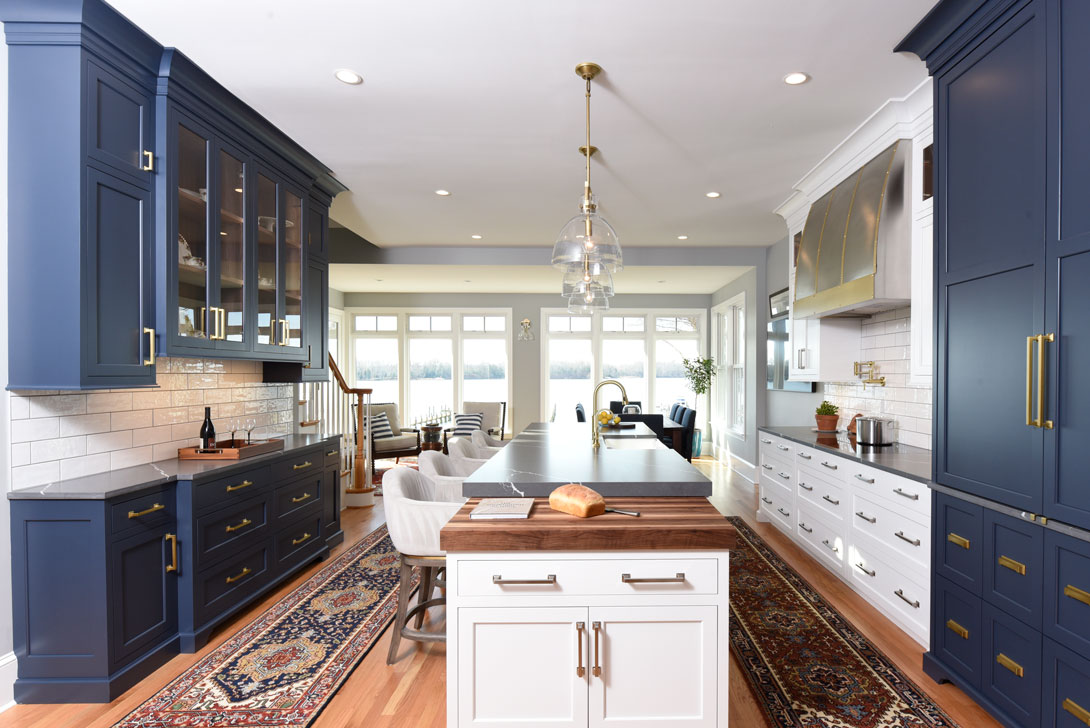 “There’s a trend for not keeping a whole lot of things on the countertop.”

When Edgewater residents Pat and Kerrie Flaherty sought to expand and renovate their kitchen, they hoped to take the small, dark, outdated space, and create one that was beautiful, practical, and contemporary. But as far as a serious vision was concerned? “We had a basic idea of what we wanted, and we can look at something and say, ‘That’s really pretty,’ but we don’t know how to get there,” Pat Flaherty says.

That’s when they found Tina Colebrook of Architectural Kitchens of Annapolis, who would help them take everything they wanted and find a way to make it a reality. That meant some big changes. “The biggest decision they made was to give up the formal dining room for a more casual eat-in kitchen,” Colebrook says. “That really enabled them to take advantage of their water views.”

Another change involved creating a lounge for their three dogs.  In fact, one of the more distinct aspects of the new kitchen design is the Labrador Lounge, a special place where the Flahertys can let their three dogs hang out. Installing a gate that’s easily tucked away means the labs can still watch everything that goes on in the kitchen without being in the way.

Greg Younger of Younger Construction came in to execute Colebrook’s architectural design. “We had to look at the existing space very carefully,” he says. “We studied the drawing and the design plan fairly meticulously so we could understand all the small little things they were trying to achieve with the project.” That meant gutting the old kitchen, putting an addition on the back of the house where a porch used to be, cutting into a portion of the old dining room, and enclosing the old breezeway that leads out to the garage.

The result is a kitchen that offers an appropriately Annapolitan nautical feel with its use of blue and white, accented by walnut wood. A built-in armoire holds appliances that might otherwise clutter the countertop—such as the toaster or blender—thus ridding the room of clutter. “There’s a trend for not keeping a whole lot of things on the countertop,” Colebrook explains.

Pat and Kerry Flaherty agree they couldn’t be happier with seeing their ideas spring to life. “It was great to be able to work with somebody who thought like me,” Pat Flaherty explains, “but who had the vision to make it work from a decorative side as well as the functional side.” Their three dogs are happy as well. 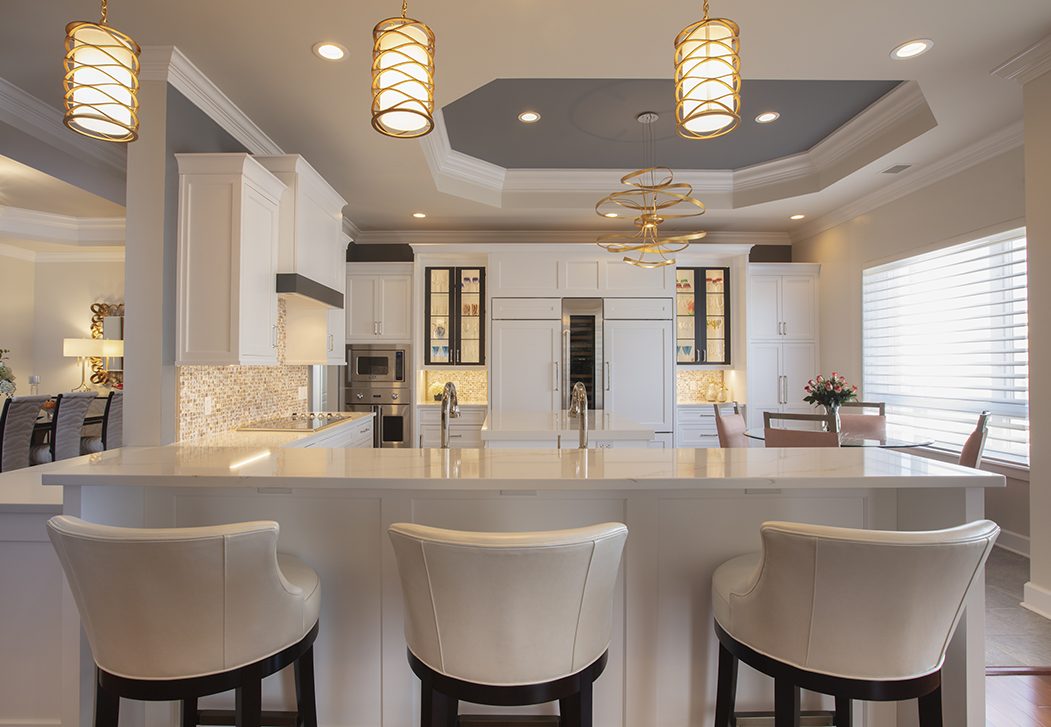 Elegance drives the design aesthetic for the renovated kitchen in this Annapolis condominium, courtesy of Design Solutions’ Joni Zimmerman.

Zimmerman likes to blend classic design elements with twists of intrigue—an approach that works well in this predominantly white and gray kitchen. Even seemingly minor choices make a big difference, like the niches to the left and right of the refrigerator. “I love to accent glass-framed doors in a contrasting color like we did in this kitchen—and I love, love, love the tile with gold stripe in the niche,” Zimmerman says.

Whereas homeowners often consider function over form, Zimmerman’s choices tend to incorporate both. The kitchen’s ceiling light, for instance, does more than brighten the space. It adds visual interest, its curviness softening edges of the cabinet details. “It totally transforms the space,” she observes.

That’s a good thing, as the predetermined layout of the room—due to the fixed location of the sink and cooktop and concrete floors—made it impossible to alter electrical outlets in the island or shift appliances. Nevertheless, there was room for some significant changes. Zimmerman persuaded her client, originally reticent about installing a galley workstation, to make the investment in the deluxe sink. It’s a choice she doesn’t regret.

While a utilitarian fixture like a big sturdy sink probably won’t ever go out of style in a kitchen, certain design trends are far more fleeting.

What of the white kitchen? “The white kitchen will always be around because it is light, classic, and coastal,” Zimmerman acknowledged. “That being said, many people are venturing away from it and looking to bring more colors and textures into a space that can be cold with too much white. Mixing materials and textures is very strong today.”