A Sea of White in Georgetown

A Sea of White in Georgetown 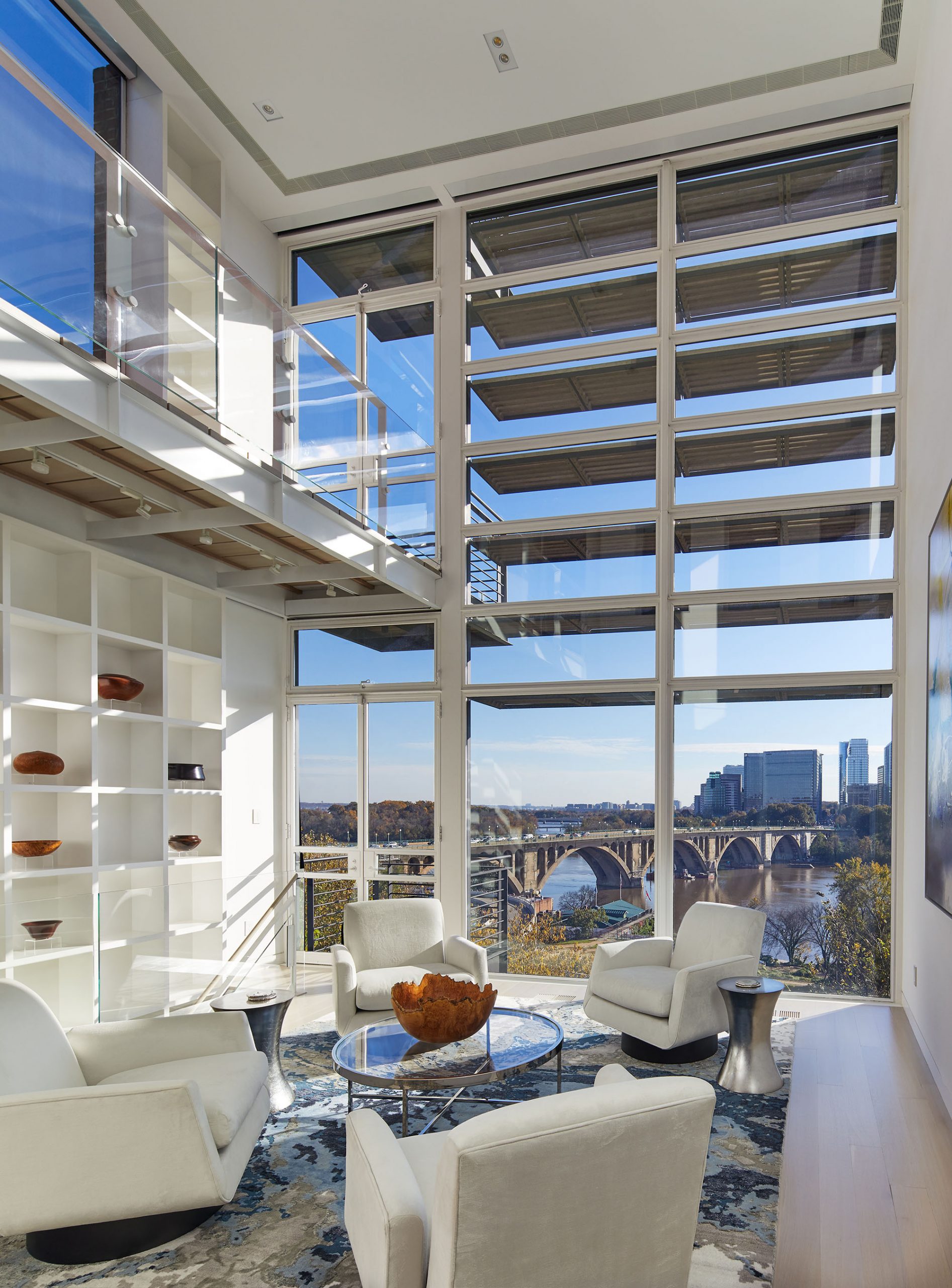 With its sheets of glass and minimalist aesthetic, this Georgetown home’s white four-story interior has an abstract quality. It seems to vanish into the air itself, erasing even the inhabitant for a moment or two. Architect Mark McInturff says the white drenching its 4,100 square feet was meant to make the interior feel “luminous and sparkly,” especially with its south-facing exposure.

He would know.  Over the past 20 years, McInturff has worked on this home situated on a bluff overlooking the Potomac River three separate times for three different owners. He jokes that instead of the usual washing machine that passes automatically to the new homeowners, “the architect conveys with the house.” But his in-depth knowledge of the structure, built in the 1940s, has helped him in each revision. He started work on it in 2003 when its 1970s facade was crumbling and “slipping down the hill,” he recalls. “We corseted it back to the house and renovated the rear 15 feet.”

In the townhome’s second renovation years later, he removed an entire floor and designed a new four-story steel and glass wall that opened the interior to views of the Potomac River and the Francis Scott Key Bridge from almost every room. The client also received a new kitchen, minor interior renovations, and, as a crowning touch, a roof deck to survey a breathtaking panorama.

In the third remodel, the current owners redid everything not completed during the first two. The interior was gutted and reconfigured as they dispensed with steel and maple millwork, replaced every surface, and painted the walls, trim, and most ceilings white. What’s more, its primary deficit could, at last, be addressed: the stair.  “I felt we were addressing the real weakness in the house,” says McInturff.  “The old one was small and windy.” He enlarged the stairwell and worked closely with fabricator AK Metals and Potomac Woodwork to fashion a new, more substantial stair connecting all the levels architecturally. A strong kinetic gesture, it simultaneously grounds and uplifts.  Importantly and in keeping with modernism’s emphasis on machine-like precision, “It is put together like a Swiss watch,” he says.  He notes that the home’s structure is unapologetically vertical, with the stairs central to all movement. “Why not make traveling the staircase an event? After all, you go up and down all day. It has to be glorious.”

What is unusual in this home is that the kitchen is one story down.  In each remodel, this could have been addressed and modified. However, the homeowners and McInturff are just fine with the arrangement. “It is pretty rare that the kitchen and living room are not on the same level,” he says. “It is an event to go to dinner and then afterwards go up and have cigars and brandy. It is like a country house inside of a modern one.” What’s more, says McInturff, “Instead of a large collection of small rooms, the condo is a small collection of large rooms.”

Against the all-white field of this townhome’s interior, details come into focus. “There are delicate railings and shelves; it is kind of like a jewelry box,” he notes. And, upon entering this home, there is the rare feeling of discovery one has when opening a locked box for the first time, peering at treasures upon neat miniature shelves. Amidst the grand Victorian-era mansions and historic brick and frame row houses that line the cobblestone streets of historic Georgetown, this home stands out with its soaring windows and vatic stair—a sharp contrast that mesmerizes all who pass by.  Though the many windows make this space feel transparent, the white seems to counter the weightlessness. The walls surround and enclose; the stair promises transport. Rather than drift in a sea of white, one is becalmed.