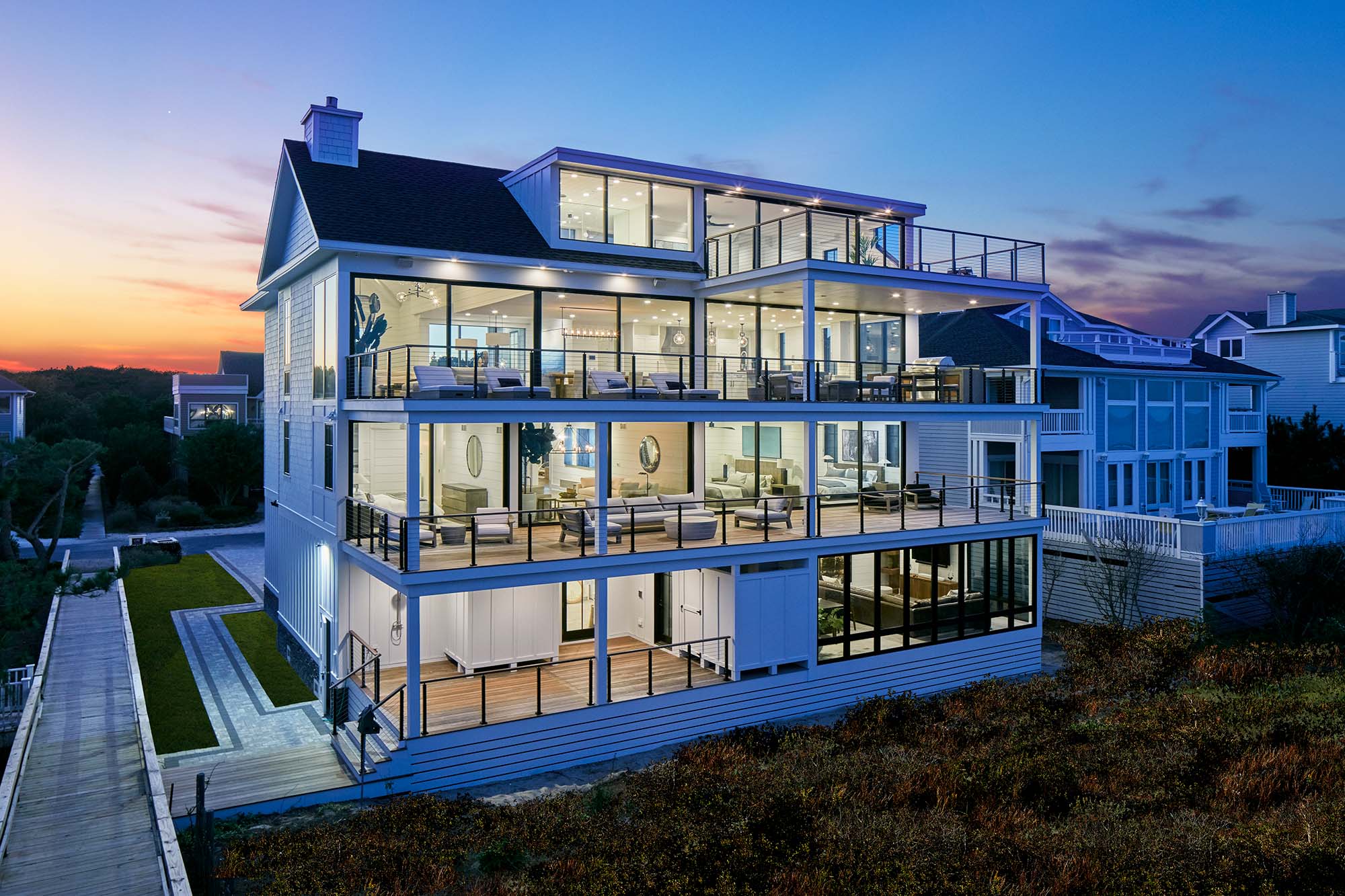 When its crisp white shingles and black trim are viewed from the street, Surfside does not look too out of the ordinary compared with other homes lining the shores of Bethany Beach. Until, that is, you walk around to the other side, where you see a four-story contemporary home with vast walls of glass rising boldly to face the sea.

“Our job was not to lose sight of the views,” says Scott Edmonston, AIA, of SEA Studio. When he sums it up like that, it makes the challenge he and others faced in designing and building Surfside sound simple. After rising to the challenge, the home now boasts a sweeping outlook on the Atlantic Ocean, no matter where you stand within its four stories.

Edmonston worked with designer-builder Marnie Oursler of Marnie Custom Homes and plenty of input from the homeowners to create the distinctive glass house.

As is the case when creating any new home, much was at stake; several practical aspects of this kind of design needed consideration. How could such a home be built to withstand hurricanes and storm surges? How could it avoid baking like a greenhouse under a hot summer sun? And how could the exterior still fit into the traditional neighborhood without looking too modern or even futuristic?

“The approach we took was we would make the southwest and north sides largely traditional—largely familiar is a good word for it. We have a couple of hints that something different is happening on the other side,”
says Edmonston.

One such hint is the front door, accessed by a grand set of steps and flanked on each side by a curtain wall of glass. For someone approaching the home from the street, it’s the first time they’ll encounter glass, but it won’t be the last.

In fact, from the very beginning, Edmonston discovered the biggest challenge was finding a way to incorporate more glass into the architecture than he ever would have used had it not been at a client’s specific request. This, he says, ended up being hugely beneficial. “The challenge—the push-and-pull from the clients—makes for better projects,” he says. “You get pushed out of your own comfort limits.”

For a home with floor-to-ceiling glass, the architectural layout had to consider the angle of the sunrise over the ocean, which, during the summer, could be as early as 5:30 in the morning. By mid or late summer, temperatures could already be in the 80s or 90s at that time of day. Screening the glass from the outside would be impractical, as it would block the view. Instead, the glass is treated with a low-heat glaze that blocks UV light, making it easier to air-condition the interior efficiently.

When the sun gets especially hot, however, the glaze might not be enough. “We pocketed integral shades into the ceiling, so you don’t see them, but when it gets too intense, you can drop the shades and block out the light,” Edmonston says. “I don’t think our clients do that very often; they want to see the view.”

Inside all that floor-to-ceiling glass, Surfside contains 30 rooms total, though the main living areas exist in a mostly open floor plan. Edmonston and Oursler saw this as a way to maximize the outlook onto the ocean while serving a beach vacation lifestyle. “Their intent was to have a big open space where you can gather and feel the togetherness of that space, and you never want to feel far away from the view,” Edmonston says.

Lighting and furniture placement segment the open floorplan into designated spaces. Even though there are no walls, there are clear distinctions between the kitchen, the dining room, and two living rooms, all of which exist on the same floor.

These fluid spaces lend themselves to the vacation lifestyle. “Most people do the same things at the beach,” Oursler says. “Usually, they have a lot of people there, a lot of guests. There’s a lot of activity in terms of getting up in the morning, making big breakfasts, going to the beach all day, coming back, cocktails, dinner—there’s a routine people fall into when they’re on vacation. We pretty much just talked through it: ‘What’s a typical day like for you guys?’ ‘How many people are typically here?’ And then we designed for that.”

Oursler’s interior design defers to the Atlantic Ocean with a quiet elegance and reflects what she describes as “modern coastal,” with beachy textures and elements—light fabrics, green plants, and plenty of white on white. “You want to bring in all those textures and those elements, but keep it modern,” she says.

The minimal color scheme gave Oursler a chance to mix and match textures, such as the unfinished wood of the living room coffee table next to the modern white sofa. In the bedrooms, the headboards feature the same wood texture that neatly complements the sleek accent lamps and vases on the nightstands.

“There are only a couple of colors in the house, but mixing the textures gives dimension to it,” Oursler explains. “It gives it depth.”

Bold, black trim around each of the windows, complemented by black contemporary light fixtures, accentuates the white airiness throughout the home.

“You think of black as typically a heavy color. When you pair it with white, it isn’t. It’s not overwhelming,” Oursler explains. “It softens it, but you see the sharp contrast.”

As for the outside, her focus was more on hardscaping than landscaping, such as the stone walkway leading from the beach to the outdoor showers. “Not a lot of landscaping happens at the beach because people don’t want to take care of it,” she says. “We don’t do a lot of grass or too much landscaping where you’ll have to pull weeds.”

Indeed, it’s hard to imagine pulling weeds with the beach beckoning and the ocean so close. Instead, thanks to the home Edmonston and Oursler created, these homeowners can look forward to an escape with incredible views of sand and waves.