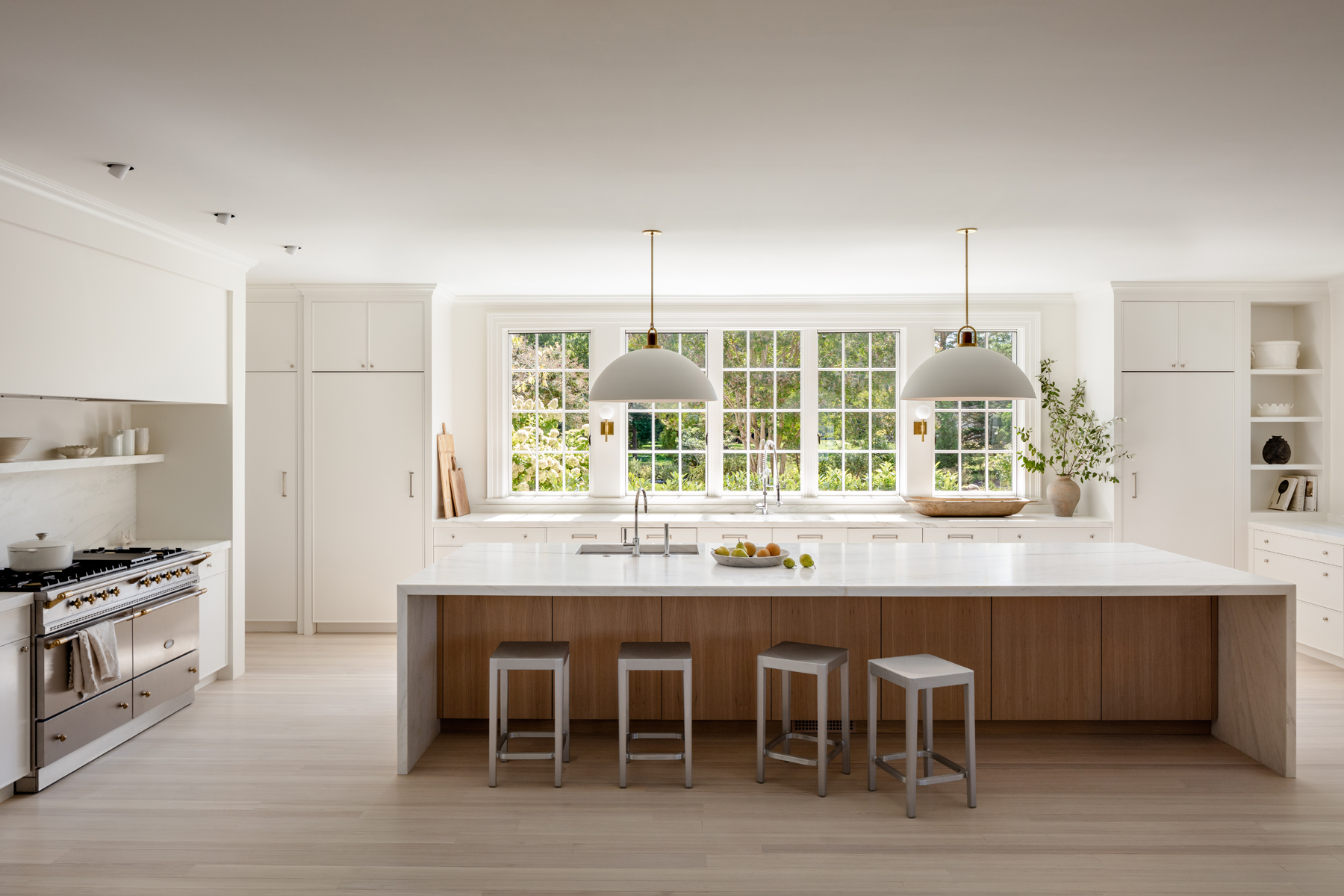 Blurring the boundary between the floor and the wall—that’s how architect Anne Decker of Anne Decker Architects describes the effect achieved by bleaching the original pine floor in a house where she recently led a renovation in collaboration with Daryl Landis of Potomac Valley Builders.

This process of bleaching the floors meant the renovation team could preserve what was original and special about the house without keeping the dark, dated look the flooring had originally.

And that’s just a small part of what this entire renovation was ultimately trying to achieve.

“We renovated this to make the house more light and airy, just a little bit more distilled and clean,” Decker says. “It was more about texture and light and proportion.”

This texture, light, and proportion that Decker describes—encapsulated beautifully in photography by Jennifer Hughes—is achieved by extensive use of white throughout the home. Simply White by Benjamin Moore predominates on the walls and trim in most of the rooms, while other shades—such as the Cornforth White by Farrow & Ball in the interior of the breakfast bar cabinet and Classic Gray by Benjamin Moore in the kitchen pantry—provide subtle contrast.

Because the property sits right alongside Peach Blossom Creek, Decker wanted to keep the inside simple, so the eye was naturally drawn to the view from the windows. Outside, the home’s exterior has Colonial and Georgian influences with its clapboard siding, giving it what Decker describes as a “nice, relaxed feel.”

The home, which Decker estimates was built in the 1920s, already had good bones, so the renovation was about keeping the original feel while updating it with modern amenities.

However, some structural changes were made. Landis explains that the choice to open up two exterior walls and install 9-foot floor-to-ceiling windows provided a greater view of the river. This meant inserting steel into the walls not only to carry the weight but also to accommodate the wind force. “That would probably be the most complicated part of this renovation,” he says.

Decker notes that many of the added windows and the expanded porch entry made for a stronger connection to the water and allowed more natural light to fill the kitchen.

Other changes included lowering the kitchen floor to be level with the family room and changing the layout of the walls to create a second hallway with more breathing space on the second floor.

But the primary feature of the renovation is its beautiful use of white on white on white. White walls with white trim, coupled with elements like the white oak cabinetry, become a canvas for “shadow play,” as Decker calls it, where light and shadows offer depth of interest. “White on white is interesting when there’s shadow and light,” she says.

She also points out how all white makes some details pop, such as doorknobs and light fixtures, which “become like jewelry.” All the art and interior furnishings came from Artful Living, an interior design studio and art exhibit based in Arlington, Virginia, providing that finishing touch of interest against the white background.

The finished result is a home that offers interest as well as tranquility: a place where the natural light and textured shadows always create something new to look at, emphasize the beautiful details, and make anyone inside feel connected to the breathtaking water view just beyond the windows.