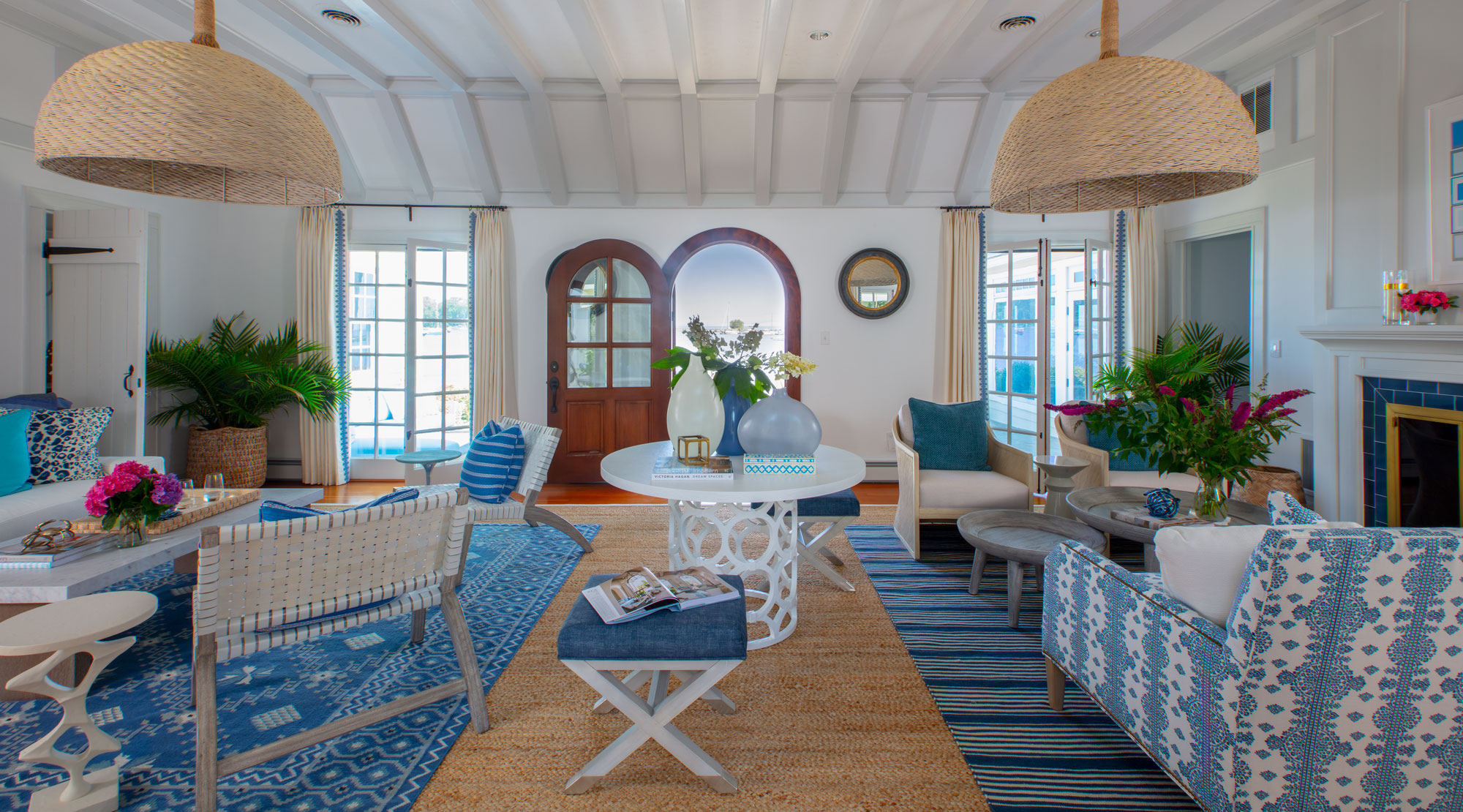 Every home has its own special voice that pervades long after its owners have gone. The homeowners purchased the 1940s rambler on Gibson Island last year as a second home. Though it had great bones, such as shiplap ceilings and original windows, its mahogany walls and traditional brick hearths did not “speak” to them. They turned to interior designer Erin Paige Pitts to change the home’s entire vibration—one that reflected a free-spirited lifestyle.

The client gave Pitts, based in Annapolis and Del Ray, Florida, some inspiration photos revealing many custom items. “She said she wanted a flip-flop friendly home that was comfortable and she did like color,” recalls Pitts. “Her husband wanted the home to feel kind of like the Hamptons.” That would not be too hard. The home is situated on Gibson Island, a secluded peninsula joined to the mainland by a causeway and bordered by miles of water, with the Chesapeake Bay to the east and Magothy River to the west. The island has a posh social scene, especially in the summer, with rolling golf courses, tennis courts, and forestland intersected by leaping deer and neatly paved roads.

As client and designer worked together from last July through late December, they began to build trust—what Pitts needs most to do her job. “I am here to take you farther than you can go on your own but not so far that you are not comfortable,” she reflects.  “It has to feel like home.” Because her client fully trusted her, “We were able to do some ‘gutsier’ things,” she says.

One “gutsy” example is the living room’s unusual lighting fixtures—two giant rush-colored pendulums that stand out against super-white walls. She placed one on each side, dividing the very long space into two. “We wanted the two areas to feel like their own intimate spaces,” she says.

Airy yet generous chairs made of driftwood and leather compose one seating group; a couch with light upholstery anchors another in front of the hearth. Pitts layered plush pillows, cushions, and accessories, which encourages relaxation.  “She particularly liked the look of layering,” explains Pitts.  Layering is more complex than it sounds, she notes.  There are thousands of patterns; risks must be taken, a meditation encouraged. There is the danger of creating dissonance rather than harmony.  However, Pitts does not overuse the same hue.

Pitts took her clients “extra far” when a complex task arose. Without flames to enchant, the fireplace’s plain brown bricks seemed to drain daylight from the room. After covering the brick entirely with a Shaker flat panel with picture-frame molding, Pitts framed the fireplace insert with marine-blue tiles, which project color. The room is no longer its former self—in an afternoon light, blues and whites seem to lift and drift through the atmosphere, recalling hues of early dawn as they merge. Adding to the lightness are exquisite window treatments in a simple off-white linen with trim by Holland and Sherry. Pitts introduced her clients to this rare French textile, available only to design professionals.

Pitts continued her dramatic moves in the dining room, encouraging her clients to trust her to “go big.” A generous table is centered by a startling white candelabra whose giant organic shape and texture recall wild reef coral.  Original dark walls and ceiling had left the room in perpetual twilight. Pitts’ faux finisher, The Artists Republic, brightened and shifted the ambiance with a wood lime wash. More window trims from Holland and Sherry add a level of detail to the scene.

Another example of taking clients “farther than they could go on their own” is a narrow hallway separated from the kitchen by a foyer. Crammed against the wall was an unwieldy washer and dryer. Now, its once-bland walls are drenched in the same brilliant turquoise as a large pre-existing custom cabinet, a commanding piece Pitts created for the previous owners. Storage cabinets are on one side of the hall and the laundry machines on the other, cleverly hidden behind sliding panels. The vivid blue walls form a kind of turquoise tunnel; one is propelled along into a small “powder room” at the end of the hall, bedecked in exuberant patterns.

The master wing opens onto a spacious sunroom equipped with a wet bar and windows facing the harbor. Down the hall, in the master bedroom, a queen-size canopy bed makes a statement, as it is dressed with curtains. Blues reappear but in quieter hues. The master bathroom reveals a daring design move: its Galbraith and Paul wallcovering, Seville Medallion, appears to be in constant motion.

Provençal-blue shuttered windows overlook a charming courtyard, just the right size. Even though it’s early February, daffodils push up through the earth. The previous owner, a renowned professional gardener, grew prize-winning daffodils and collected many unusual specimens.  It is fitting that these rare species, selected mindfully, are still here, almost ready to bloom. With their perennial strength and beauty, they match the level of spirited design in the home.