Cliffside on the Severn 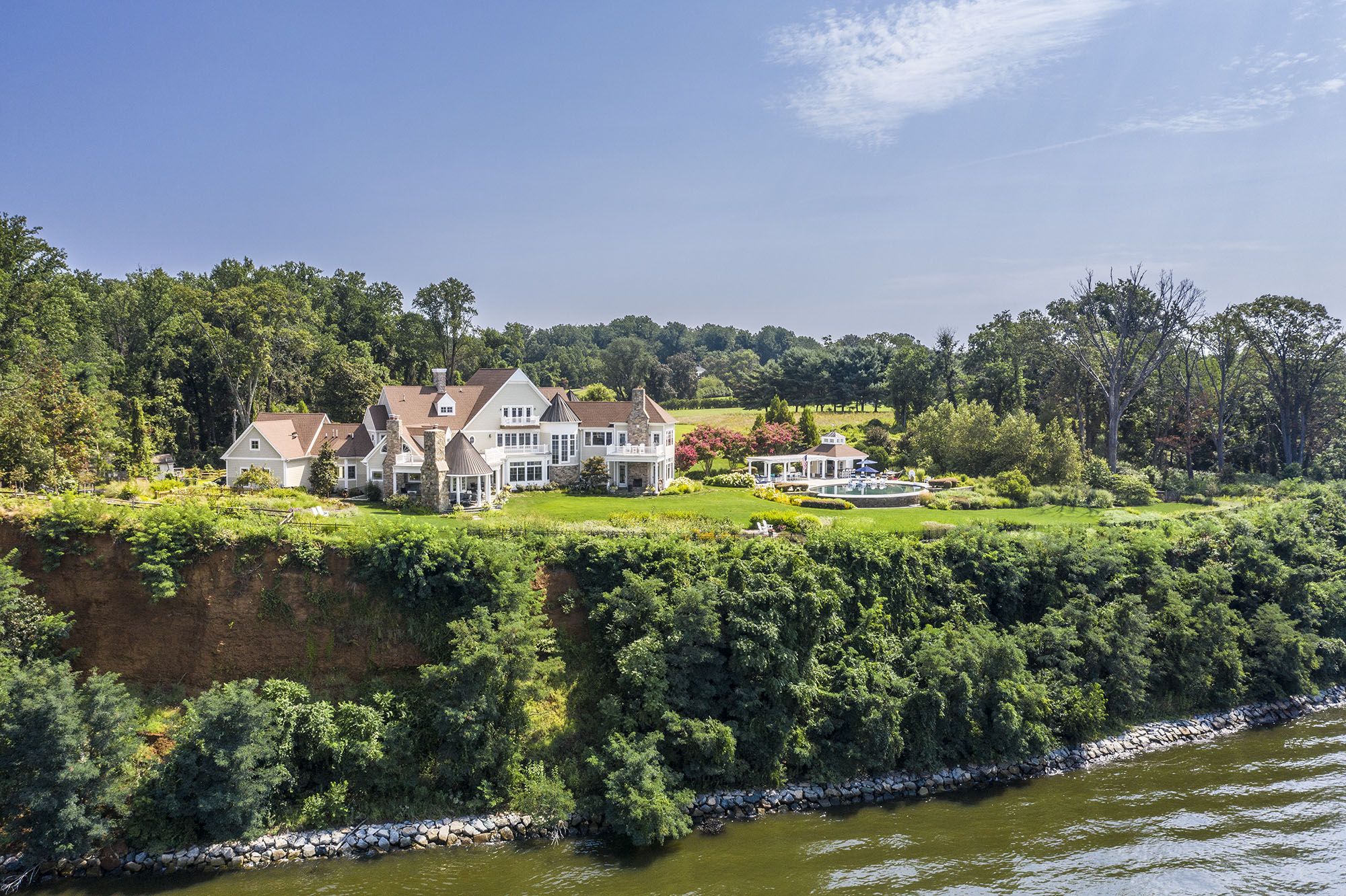 Tucked away at the end of a long private driveway in Annapolis, a sprawling home on the Severn has long drawn oohs and aahs, particularly for its grand exterior. The house sits a stone’s throw away from the Severn River, with awe-inspiring views of Annapolis. The ample backyard houses an elegant infinity pool, surrounded by plenty of seating areas. Mature, native-inspired landscaping provides a colorful framework for the home year-round.

The shingle style home recently underwent an interior design overhaul. Steve Terhune, the home’s architect, says he modeled it after turn-of-the-century houses in the Hamptons, considered America’s versions of “castles made of wood.” Now the home’s interior exudes a modern coastal aesthetic.

The homeowners never set out to change the entire look of their home’s interior. Originally, they hired Annapolis-based interior designer Gina Fitzsimmons to give an upstairs bedroom a facelift and convert half of an adjoining storage area (containing the HVAC unit) into a bathroom. The results were too inspiring not to expand upon.

“They liked my Chesapeake, cozy look,” says Fitzsimmons of her clients, whose family of six makes this Annapolis home their primary residence.

Once she landed on this appealing aesthetic, Fitzsimmons renovated the entire first floor, transforming the traditional Country French style into one with an unmistakably relaxed coastal vibe.

Formal chandeliers, some with dangling crystals, were swapped for simple, fun modern light fixtures like the one in the dining room, designed to look like a sideways corkscrew—fitting, given the handsome wine rack in the corner of the room. Also, in the dining room, the designer made sure the wine labels faced outward in the racks, allowing them to be more of a conversation piece. Details!

Some of the renovations involved not just a designer’s detailed eye, but intensive manual labor, too. For instance, the elegant curved handrail on the main level’s staircase was sanded several layers down to its original wood finish before being painted a light color that perfectly complements the floors, previously Red Oak but also sanded down to bare wood, then stained grey and sealed.

“I had a feeling for what they wanted and how they lived, and I kept working toward it,” Fitzsimmons says.

Ultimately, the renovations led to a living space that was a better match for Fitzsimmons’ clients; not just stylistically, but functionally, too.

Some were small tweaks. In the kitchen, redesigning a second island allowed it to seat all six family members, with bar stools facing the Severn River. Now occupants enjoy gazing at birds, boats, and the river currents from their perch in the kitchen as opposed to the former design, which had them staring at the stove. In another clever tweak, the other half of the “dining island” incorporated a curved banquette built to accommodate a six-foot round table.

Other changes created new spaces for the family to enjoy. Moved under the staircase, the piano, with its exquisitely curved form, looks as if it belongs there. The switch freed up room to allow the family to more easily gather in the main level’s living room area. Also, on the main level, a formerly underutilized office was re-envisioned as a game-slash-homework room where family members have been caught doing old-fashioned jigsaw puzzles. The bar underwent perhaps the most significant aesthetic change, but its purpose remains intact.

Fitzsimmons describes the former space as a traditional “man cave”—one the homeowner was reluctant to change until Fitzsimmons convinced him it would remain a favorite gathering spot. With his approval, she went to work. Dark cherry paneled walls were painted white. On the clean bright walls, nautical-themed photos by Annapolis’ own Jay Fleming were carefully positioned inside the raised paneled walls and trimmed with a one-inch “Hale Navy” pinstripe. The same navy is picked up as an accent color on the ceiling, whose recessed lighting is secondary to the copious natural light streaming in from the room’s ample windows. The bar provides not only a perfect view of the backyard; its two doors lead directly to the outdoor space.

On a hot summer morning, a deflated float toy at the water’s edge offers the only proof that children sometimes splash in the elliptical swimming pool with a vanishing edge that connects the property to the Severn River.

“The pool was placed on an axis with the game room to catch the reflection of downtown Annapolis on its dark surface,” says Bob Hruby of Campion Hruby Landscape Architects. “The vision was that of a dish of water reflecting the sky.” Hruby also designed the pool and pool house in collaboration with Mike Prokopchak and team at Walnut Hill Landscape Company.

Campion-Hruby has designed gardens on the property for over 15 years. In this project, they surrounded the pool’s generous seating areas, cabana, and large cedar pergola with blooming shrubs and flowers, adding bursts of late-summer color and lending shade to loungers and outdoor diners.

Inside and out, this gem of a home on the Severn delivers coastal comfort and style.