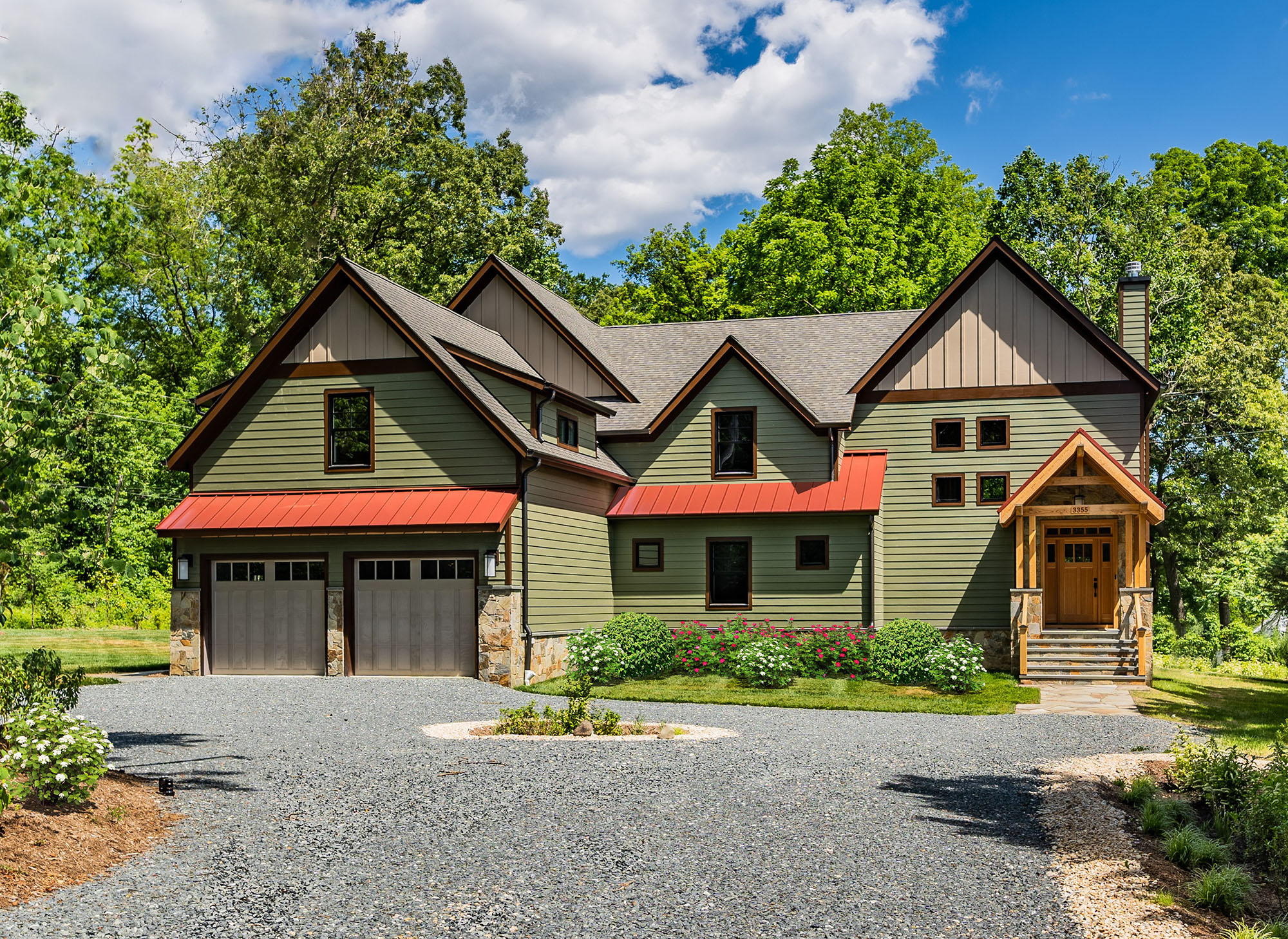 In the mid-1600s, those who settled on Maryland’s Eastern Shore had few choices when building their homes. They hitched up a cart and drove to the closest forest for oak and cypress logs, to the river for mud and clay for brick making, and to a local quarry for stone.

Fast forward to 2022. Today, building a home is a complex endeavor, with thousands of components and no horses involved. We still have conventional building practices, with forests razed and suburban enclaves appearing overnight. However, a parallel universe exists: the “green” building movement, which advocates energy-efficient structures created with renewable resources. Once a niche industry, it now has a solid following, with its share of innovators. Building upon this momentum, certain architects believe passionately that how a home functions, as well as its location, longevity, and environmental impact, right down to the composition of its insulation, are just as important as its form. What distinguishes sustainable architects from others is this: they are closely involved not only in the design of a home but also in its construction, specifying which advanced technologies and renewable materials should be used.

Ricky Goldman’s waterfront home in Edgewater, designed by Melanie Hartwig-Davis, is a prime example. “My philosophy about sustainable architecture is at once aspirational and realistic,” says Hartwig-Davis, the principal/CEO of HD Squared Architects. “The Goldmans did not come to me specifically for a sustainably designed home, while they did express interest in energy efficiency. I wove sustainable design aspects into the design at each phase, taking the opportunity to educate them along the way.”

After almost a decade of working with environmental regulations along Brewer Creek off the South River, Goldman and Hartwig-Davis, with the help of Bayview Builders, built a house that is both picturesque and efficient. An example is its Zip-R wall system: a structural panel with built-in exterior insulation that provides superior energy efficiency. In its production, very little is wasted. Approximately two percent of its byproducts are disposed of in landfills, according to its literature.

For siding, instead of traditional wood or vinyl, Hartwig-Davis used Hardie Fiber cement siding. HardiePlank siding is made from natural and sustainable raw materials: cement, sand, wood fiber, and water. While not a natural material, it is lower in toxicity than vinyl, with no glass asbestos fibers or formaldehyde.  Additionally, it contains far less lumber than wood siding, which ultimately preserves our forests.

To frame the home, Bayview Builders construction manager Rich Lang notes they used engineered lumber rather than steel, a choice much safer for the planet. To produce steel, large amounts of coal and coke are used, which emit carbon dioxide and other gases dangerous to the earth’s atmosphere. Lang explains that less energy is used to create engineered lumber, and that process is more efficient. He adds that in the making of OSB, up to 90% of the raw material is used as a wood product. In the case of milled lumber, that number drops to 60% or less. What’s more, engineered wood is more resistant to water damage than pure wood and provides more insulation.

The approximately 5,000-square-foot home is situated about 200 feet from Brewer Creek. Located next to Pocahontas Marina, it was positioned to preserve as many trees as possible.  Due to a seven-year moratorium on building new houses enforced after the Mayo Waste Water Treatment Plant was decommissioned, it took time to begin construction.

The home has four bedrooms and four full baths. The floor plan has an open space, with the first floor flowing into the kitchen.

“We are cognizant that people need to get away at times and have their privacy,” Hartwig-Davis explains. “One of the things we have on this level that is easily accessible is an office/flex space.”

In the kitchen, the Silgranit solid surface sink and separate refrigerator and freezer units have separate compressors for efficiency. The leather finish on the kitchen counters gives the granite a warmer, more natural look. Ricky’s wife, Deb Goldman, thought that regular granite was too cold for the kitchen. The leather finish is subtle but makes a big difference. Beyond the kitchen, there is a mudroom and laundry room with a sink. As the first floor has an owner’s suite with two walk-in closets, it can serve as the entire living space.

Ricky spent years traveling to Asia on business and brought back old-world antiques that adorn the first and second floors. Deb Goldman practices Eastern meditation in two distinct spaces: a nook in the master bedroom and an office on the first floor. The entire house is adorned with artifacts from China, Thailand, and Burma (now Myanmar), among other exotic places: statues with gold leaf trim, masks, vases, and antique screen panels that stand close to six feet—all of which add a refined element to each room.

Wooden ceiling fans in each bedroom are energy-efficient, move the air, and are aesthetically pleasing. “I was not into ceiling fans, but Melanie convinced me,” Ricky Goldman said.  “Now, I love them.  I use them all the time.”

In many ways, this home is a testament to modern sustainability. Design was not sacrificed despite using low-impact, high-performance materials. The real success of those renewable features is that they are part of a beautiful home.

•Ceiling fans, which use less energy while increasing the comfort of occupants

•EV ready in the garage

•Low VOC paints and sealants, which are less toxic in production and preserve indoor air quality for occupants