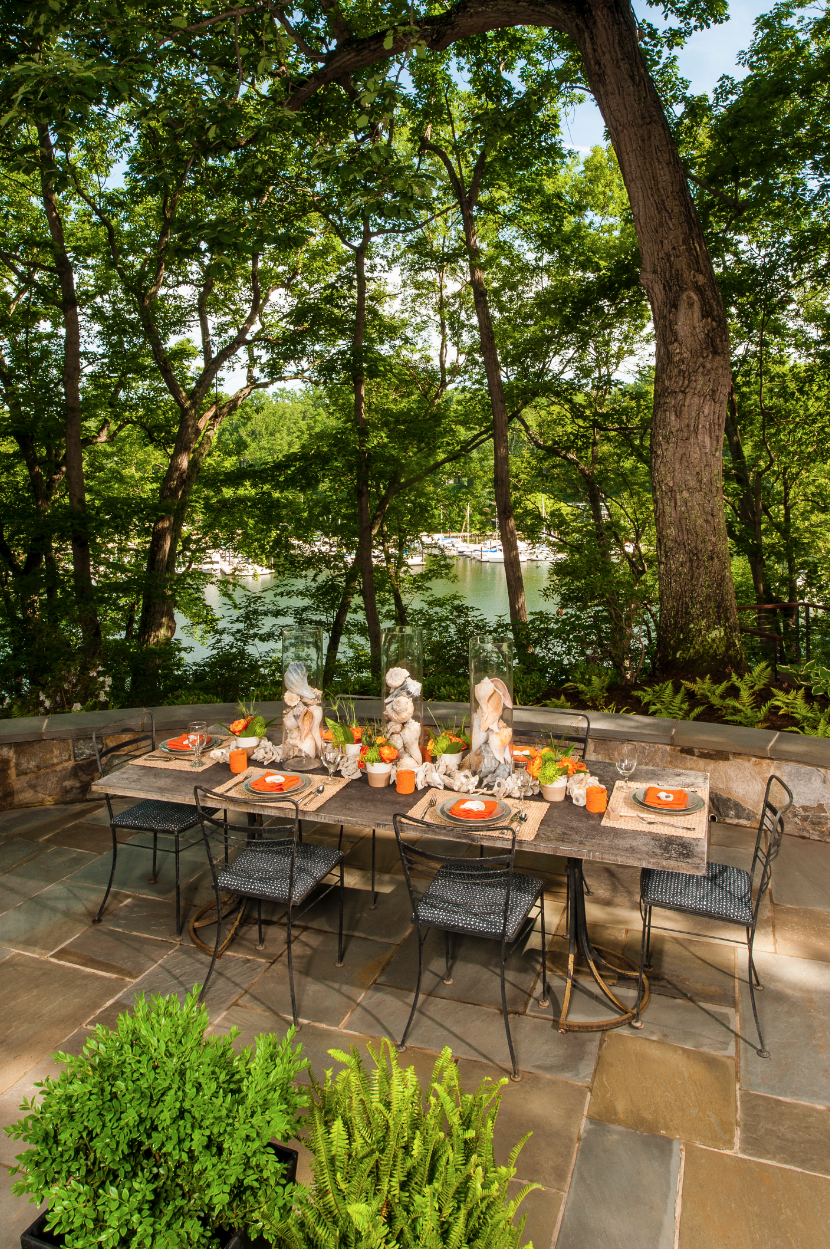 This waterfront design story starts with a low-key cottage in a rolling community called The Downs in Annapolis. The problem? A leaky swimming pool the homeowners wanted to fill in and replace with a garden. It ends with a leafy oasis secreted away behind the home, composed of a graceful pool, an outdoor kitchen, and dining spaces. A screened-in three-season porch with sumptuous couches, fireplace, and flat screen TV crowns the ensemble.

“When Hal, the owner of Quayle & Company came back from talking to the client he said they were interested in filling in the swimming pool,” says Doug Richard, production manager for Quayle, an award-winning design build firm based in Severna Park. “Hal told the clients that since the house was on the water, if they filled in the pool, they would never be able to put in another one. It would be a real tough sell with the county.” 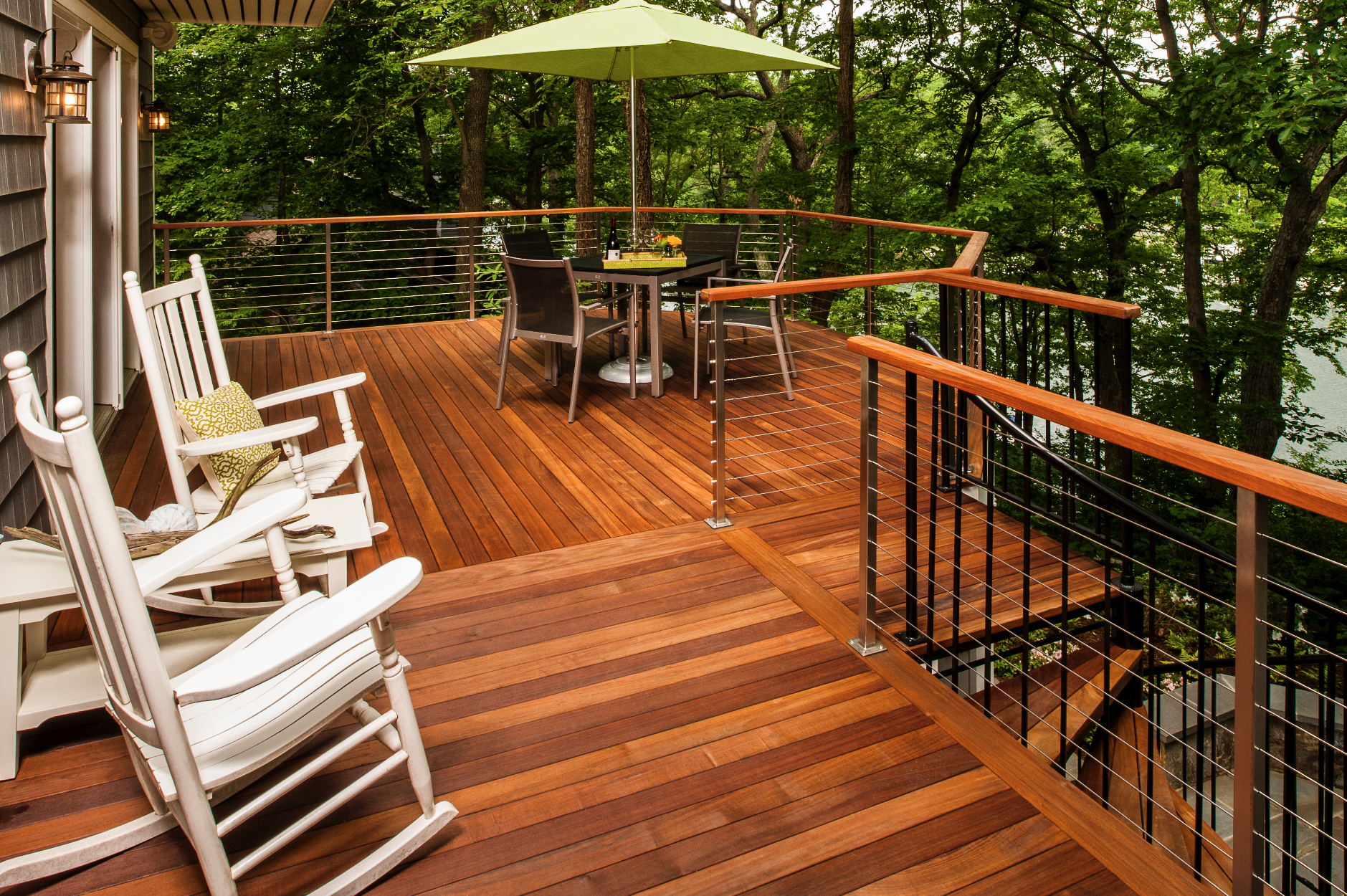 The home’s owners Alan and Sherryl Fletcher moved to Annapolis from Ann Arbor, Michigan, in 1995. Alan is a financial entrepreneur and Sherryl works in college admissions. They bought their house in The Downs, which backs up onto Brewer Creek, in 2007 and finished raising their two sons there. The kids made good use of the pool in question, despite the leak. “Our sons loved it, when they were living here,” says Sherryl, “but the pool always felt disconnected from the lower level of the house and then it started to leak.”

As the design team began to diagnose the pool, the homeowners guided them toward another problem child in the backyard. “We had a detached gazebo that you had to walk down the hill to get to,” notes Sherryl, “plus the lower level of the house was very damp and dark.” Creative ideas began to flow back and forth, for problems such as these are Hal Quayle’s specialty. A grand plan started to emerge that would save the pool, integrate it with the rest of the home, and create a series of interlocking outdoor spaces on both upper and lower floors. The project kicked off in September 2013.

The gazebo was removed along with an existing deck, and the pool was drained and repairs began. Excavators moved in and re-graded the back yard, which opened things up for an outdoor kitchen, bar, and seating area that connects to the home’s basement level. The kitchen was outfitted with concrete countertops, stainless steel cabinetry from Danver, and a jumbo-sized grill from Lynx. A knee-wall sculpted from natural Carderock stone borders the new patio.

The space is nestled under the mature tree canopy that surrounds the house. Flagstone pavers lend a rustic woodsy feel. A screened-in porch that functions as a three-season family room and connects to the home’s living room was added on top of the outdoor kitchen. There is a gas fireplace, flat screen TV, comfortable seating, and a table for casual dining. Flooring in the porch and the rest of the decking features ipe, an extremely dense and durable exotic hardwood sourced from American Cedar & Millwork in Millersville. What makes this decking particularly stunning is that all hardware is invisible, so the deck looks virtually seamless, with no intrusive screws or metal. Cable railing allows clean sight lines to the water and adds a dash of contemporary feel to the shingle-clad, cottage-style abode.

Rough-hewn stone leads down the hill a few steps to a tram that carries visitors through the woods to the dock below. There are two more outdoor seating areas, one at ground level and another above that opens into the home’s main dining room. Thoughtful re-grading and additional stone retaining walls lead guests through a much-improved connection to the troublesome swimming pool.

Construction on the project lasted until May 2014 and it’s now finally complete. There were a few challenges along the way, including some things that nobody could do anything about. “The biggest thing was the weather,” says Richard, “that, and the tongue and groove ipe floor was very unforgiving.” During the design process, the pool required two attempts to fix the leak, and the outdoor grill changed locations as the team collaborated on different layout possibilities. “We were sitting back, and trying to be patient as the space evolved,” says Sherryl.

The production manager’s favorite part of the project is the outdoor kitchen, a big surprise at first sight, and the working relationship he enjoyed with the owners. “The Fletchers were great,” Richard says.  “Everybody was on the same team. It was very collaborative.” 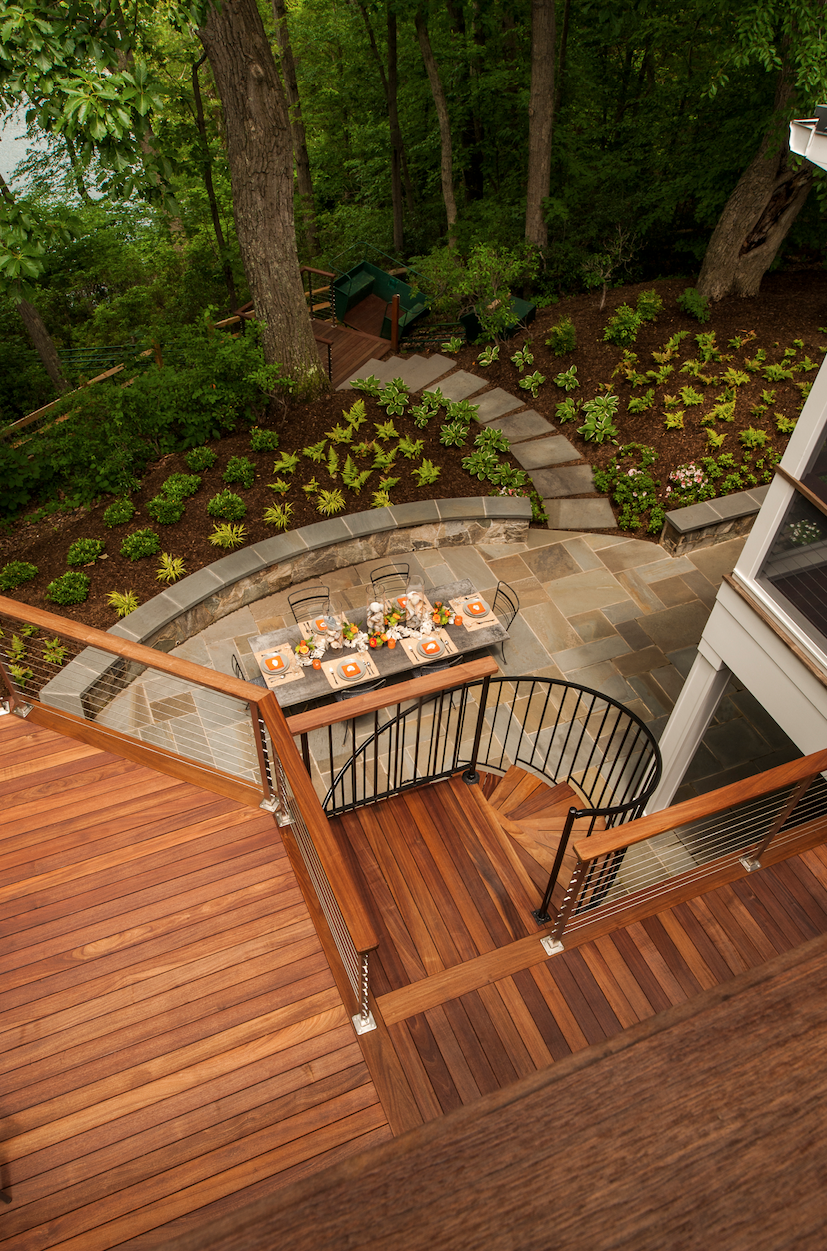 For Sherryl Fletcher, it’s all about the peaceful views. “My favorite spot is the outdoor dining area overlooking the pool,” she says. “Between that and the screened-in porch the house has become much more flexible. You can sit outside, read a book, and still be part of what’s going on outside.”

Much goes on out of doors and the best part is that you would not really know it. The front of the cottage is alluring, giving just a hint of hidden riches: twin stone walkways carry visitors around back and into some of the finest and most intimate waterfront living in Annapolis. What is special is this project’s scale. In a relatively small area, multiple spots for dining or enjoying a glass of wine while surrounded by nature beckon. One cannot help but heed their call.