Farmhouse Reinvented on the Eastern Shore 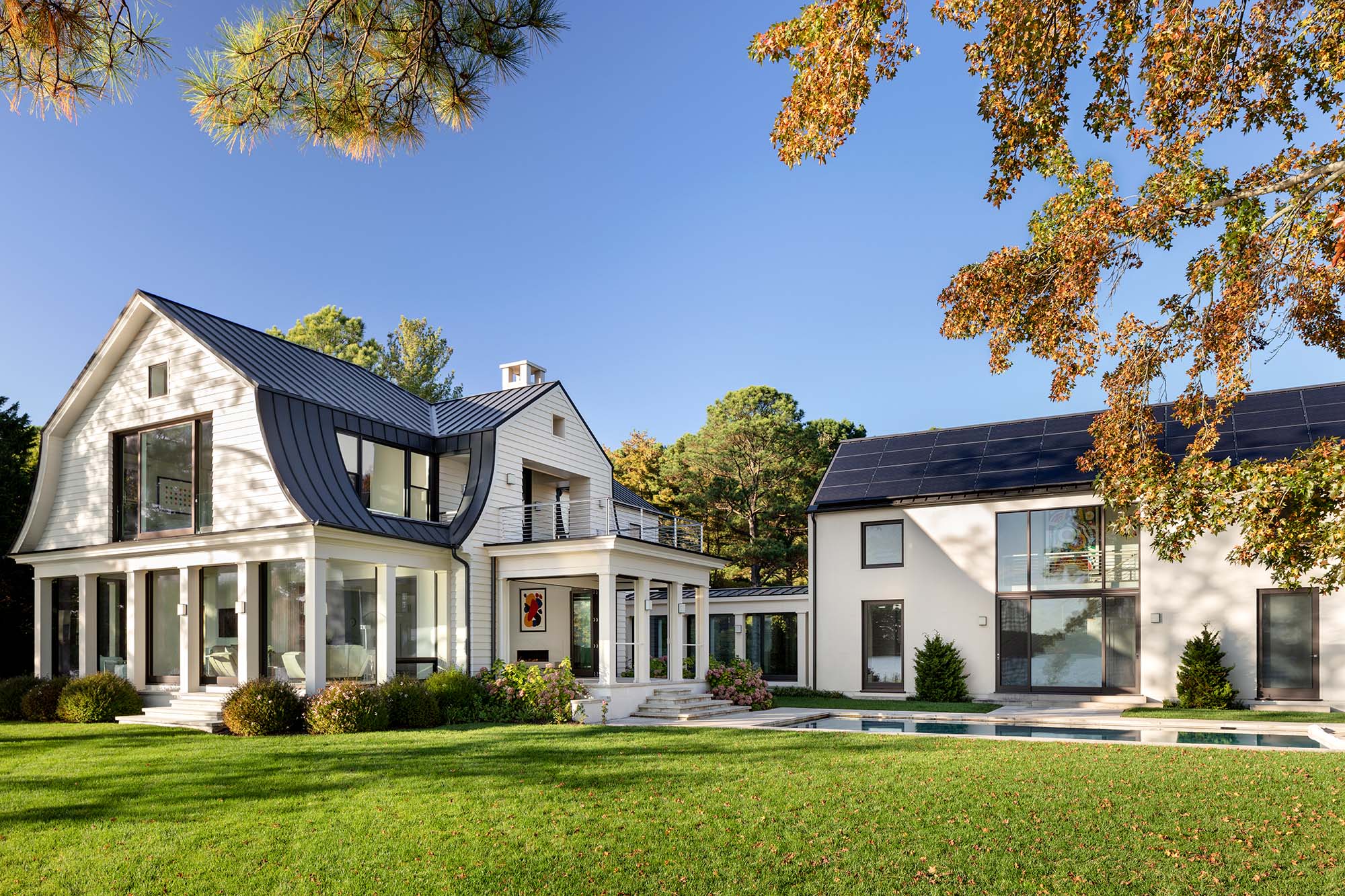 Architect Dale Overmyer conceived a home on the Eastern Shore that draws from the farmhouse and barn connection, transforming that architectural vernacular into an elegant modern home.  It came about this way. When Washington, DC-area homeowners became empty-nesters a few years ago, they found themselves in need of a ‘project’.  So, when a friend suggested they consider a second home on the Eastern Shore, they set out to find just the right one.

Eventually, they found what they were looking for—a peaceful point of land surrounded by water that offered privacy and a connection to nature. Unfortunately, the pre-existing house would not work even if renovated, so they contacted Overmyer and Dennis Hornick of Overmyer Architects. Overmyer had designed their Washington, DC-area home ten years earlier.

The couple wanted a modern, simple, open home with “fabulous” views, as low-maintenance and energy-efficient as possible. They also wanted a free-standing guest house and a generous space for extended family to come and stay comfortably. They envisioned the home as a weekend getaway for now and possibly a primary residence later.

Each of their wishes presented a design challenge, explains Overmyer. “The existing house was too small, yet they didn’t want to live in a large house as empty nesters. The challenge of making a large structure more approachable was solved by breaking the house into two parts—farmhouse and barn, that are subtly distinct and also unified.

“The hope was to double the size of the original structure. However, the 100’ setback buffer allowed only the thinnest connection between old and new structures. Ultimately, it worked well, we were able to create a separate guest building,” he adds.

With the farmhouse-barn concept in mind, he used horizontal siding on the main structure, which has a welcoming veranda and a variation on the New England shingle-style gambrel roof. Flush vertical, barn-look siding is used on the new guest wing, which has a utilitarian rural character. Casement windows throughout incorporate a popular detail of the current modern farmhouse design. The dark standing seam metal roof unifies both structures and allows for easy attachment of solar panels.

The hyphen connecting home and modest guest house is significant.  With this form, Overmyer makes visible the ancient connection between farmhouse and barn. Drawing energy from the sun, it serves as a modern conduit between spaces and people, a visible reminder that although families no longer need to hasten to the barn to milk the cows, the human need for connection remains.

The traditional farmhouse often faced south, to absorb the sun’s warmth and to make it possible to work in natural light. For our modern era, this farmhouse goes one step further, with geothermal air conditioning and radiant in-floor heating, LED lighting, and 36 solar panels. One interesting challenge for Overmyer’s team was how to fit the photovoltaic solar array neatly onto the roof while having it blend with careful sizing and color choices. “Aesthetically, we enjoyed balancing traditional façade compositions with generous modern glazing and a metal roof that would be durable,” adds Overmyer.

The arrangement produces about 2000 kilowatt-hours a month—almost enough to sustain the home. In fact, on days when the house is vacant, it generates more electricity than it uses and actually contributes to the electric grid.

The final design incorporates family living, study, kitchen, and dining spaces on the main level, with the spacious master suite upstairs. Connecting the two structures with the breezeway allows them to live in them separately or together, as two small houses for one large family. From the homeowners’ perspective, “We wanted to make sure that the house would incorporate spacious, thoughtfully-designed guest spaces, so each little guest ‘suite’ has its own mini-kitchen.”

In essence, they built the house around the views. The outsized custom windows, open floor plans, floating staircases, and unobtrusive pocket doors done in minimal finishes and light colors keep the space unconstrained and enhance the homeowners’ contemporary art collection. “While we always say that the house was built around the views, it was also built around the art: in one instance eliminating a window to accommodate a very large oil painting,” says the homeowner.

With flowing spaces, energy-efficient systems, stunning vistas, and a special guest house, the homeowners are pleased. “Whether it’s just the two of us or our entire extended family, this is exactly what we had hoped for in a weekend home: a conducive site for celebratory family gatherings,” the homeowner concludes.

As prevailing zoning restrictions meant that the guest house could not be built as a free-standing structure as the homeowners had envisioned, the architect’s idea to connect the guest house to the main house via a glass-enclosed corridor resulted in a distinctive design. “This turned out to be a wonderful solution, becoming both a beautiful design feature and a really convenient connection between the guest spaces, garage, and main house,” say the homeowners. Happily, it is an update of a concept that has kept families connected to each other—and to the land—for centuries.