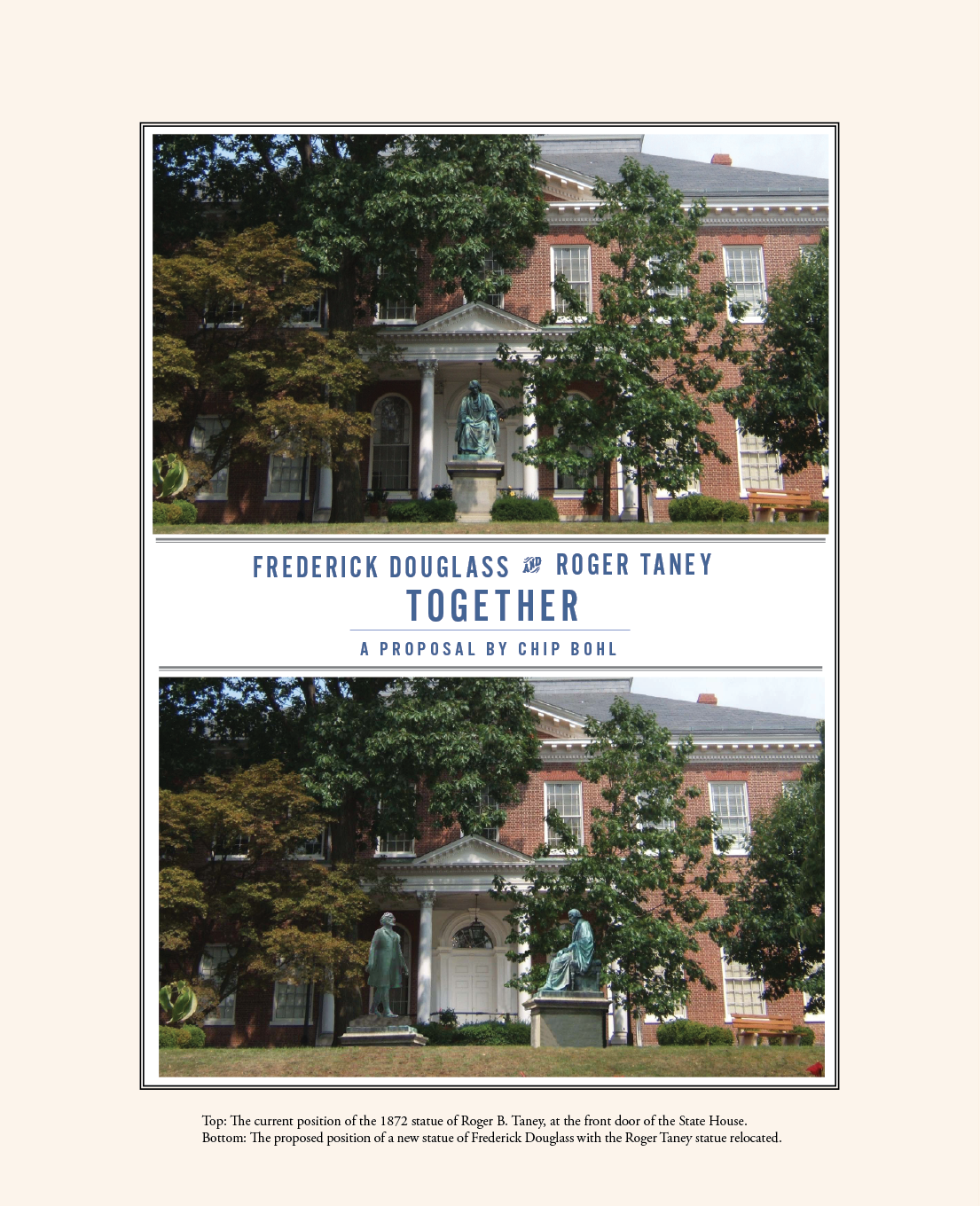 Frederick Douglass & Roger Taney Together
A Proposal by Chip Bohl

Editor’s Note: Architect Chip Bohl proposes a modification to the monument at the Maryland State House to Supreme Court Justice Roger Taney. Taney authored the infamous Dred Scott Decision denying citizenship to African Americans during the Civil War era. A new statue would be created of Maryland native, ex-slave, and abolitionist Frederick Douglass. Taney will no longer cast his lone shadow on State Circle. He would be repositioned to face Douglass on equal ground.

Supreme Court Justice Roger Taney’s infamous Dred Scott Decision declared all African Americans to be forever slaves, with no rights of citizenship granted by the U.S. Constitution. The placement of his statue at the front door of the Maryland State House seven short years after the end of the Civil War was a blatant statement that the status quo of white landowner dominance was not to be questioned. To allow the statue of Taney to remain in this seat of honor is an untenable acquiescence to that status quo.

Frederick Douglass was born into enslavement in 1818. He ran away from Wye Plantation, Talbot County, Maryland, educated himself, and in 1845 wrote his autobiography Narrative of the Life of Frederick Douglass, an American Slave, Written by Himself. This is arguably the most famous and influential slave narrative ever written. Douglass became a national and international orator for the abolition of slavery. He publicly debated constitutional law and congressional legislation, advocating that the U.S. Constitution was a declaration of human freedoms, not a document of property rights. Douglass had to flee the United States because of the Dred Scott Decision but said “my hopes were never brighter” that the Decision would bring slavery to the attention of the nation and help bring its abolition. The State of Maryland should honor its native son Frederick Douglass with a monument at the Maryland State House.

Frederick Douglass and Roger Brooke Taney define the polarity of the constitutional crisis of slavery in the United States. Their views of the Constitution, life, and liberty could not have been more different. Maryland may be unique among the States to be the birthplace and home of two individuals of such importance. They shared the national stage together at the peak of their accomplishments. Bringing them together in an educational monument will allow them to be more fully known. Knowledge of their time will inform us of our own time.

The Taney Statue was positioned at a singularly prestigious place of honor: directly at the front door of the Maryland State House. The statue depicts Taney at about twice life size, seated on an elaborately carved cushioned seat. Taney is depicted as a somber figure, head downward facing, shoulders rounded, and back bent. While he sits on a seat of power, authority, and privilege, his countenance is one of exhaustion. “The Constitution” book supporting his arm is by contrast solid, firm, and straight. The statue is a masterpiece of nineteenth-century American neoclassical art, created by acclaimed sculptor William Henry Rinehart whose other works are in the National Gallery of Art, Walters Art Gallery, the Metropolitan Museum of Art, and the Smithsonian American Art Museum. The symbolism that Maryland native Rinehart sculpted into the Taney statue is deep and complex. But the very presence of the statue in this place of honor is not so subtle. The population of African Americans in Annapolis grew from about 40 percent to 50 percent after the Civil War. This meant that half of the people living in Annapolis had to walk past the statue of the man honored for ruling that they could not be free nor citizens. The exquisite Taney statue provided the symbol that white landowners’ control would not be interrupted by the results of the Civil War. A second statue of identical bronze casting was placed at the same time in Baltimore’s prestigious Mount Vernon Place, with Taney facing the Washington Monument. We need a new monument at the front door of the Maryland State House. With statues of Frederick Douglass and Roger Taney placed together, the monument can tell of the constitutional crisis of enslavement, the tragedy of the Civil War, and its tumultuous aftermath. 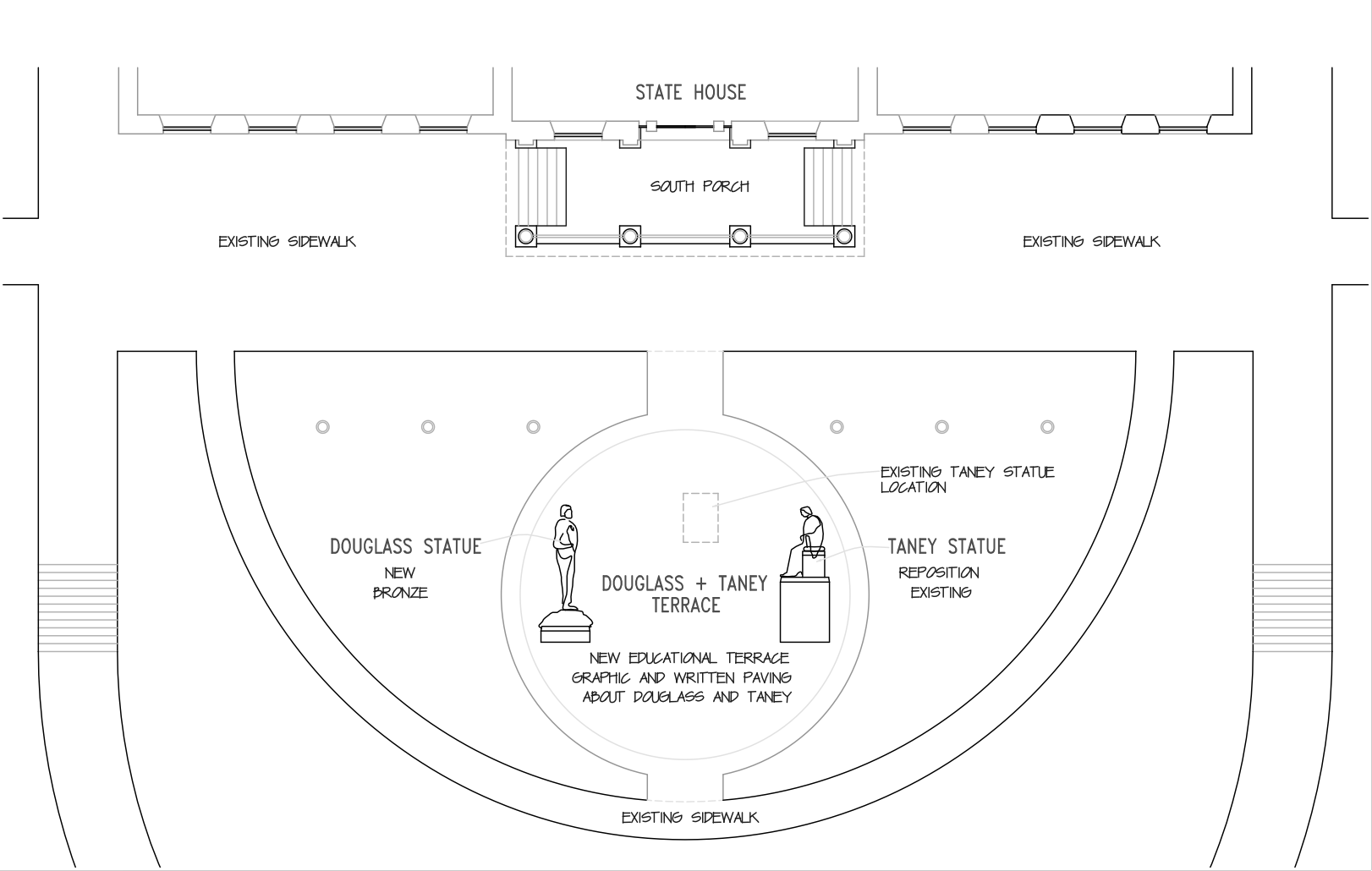 The Taney Statue would be relocated, turned 90 degrees and shifted off the building centerline. It would then face a new statue of Douglass. Both statues would be equidistant from the centerline of the State House. Thus an open central axis is created for people to stand on the educational terrace, between the two statues, and see the beauty of the State House front door, porch, and dome. From a preservation point of view, the Taney statue is preserved and retained without modification. More important, it becomes an indispensable part of a larger more significant monument. This is an opportunity to more fully describe Taney’s view of the Constitution, and to explore the fact that he emancipated his own slaves many years before the Civil War and provided pensions for those individuals that could not work.

The Frederick Douglass Statue would be a new bronze portrait figure. There is no significant monument to Douglass at the Maryland State House, clearly one of Maryland’s most important native sons, and whose 200th birthday will be celebrated in 2018. The new standing statue of Douglass would be the same scale as Taney, about two times life size, and stand as high as Taney, about 14 feet. Douglass should be standing, with a posture and look that is willful, positive, and determined, as are many of his photographic portraits. He should be depicted at about forty years of age, the time of the Dred Scott Decision and his most important contributions. He should be standing on a stone base, carved as course uneven ground that shows no advantage, privilege, or comfort.

The beauty of this monument is that people stand in the middle of the terrace. They are on the centerline of the front door to the State House. They will walk between the likenesses of two important Maryland individuals and learn their stories and an important part of the story of the United States.

The recent removal of the Confederate battle flags in South Carolina helps to correct a State-sponsored spirit of bitterness and hate. The State of Maryland should correct the misplaced honorary seat of Roger Taney. The State should also recognize the importance of Frederick Douglass on his 200th birthday. Here is the opportunity to do both and create an important educational monument for all of America.

To follow and support the monument of Frederick Douglass and Roger Taney Together please visit: FrederickDouglass-RogerTaney.com.

Architect Chip Bohl is currently working on projects in Annapolis, Los Angeles, and upstate New York. He and his wife owned and restored “Twin Oaks,” the summer home of Frederick Douglass in Highland Beach, Maryland, built in 1895 for him by his son Charles Douglass.