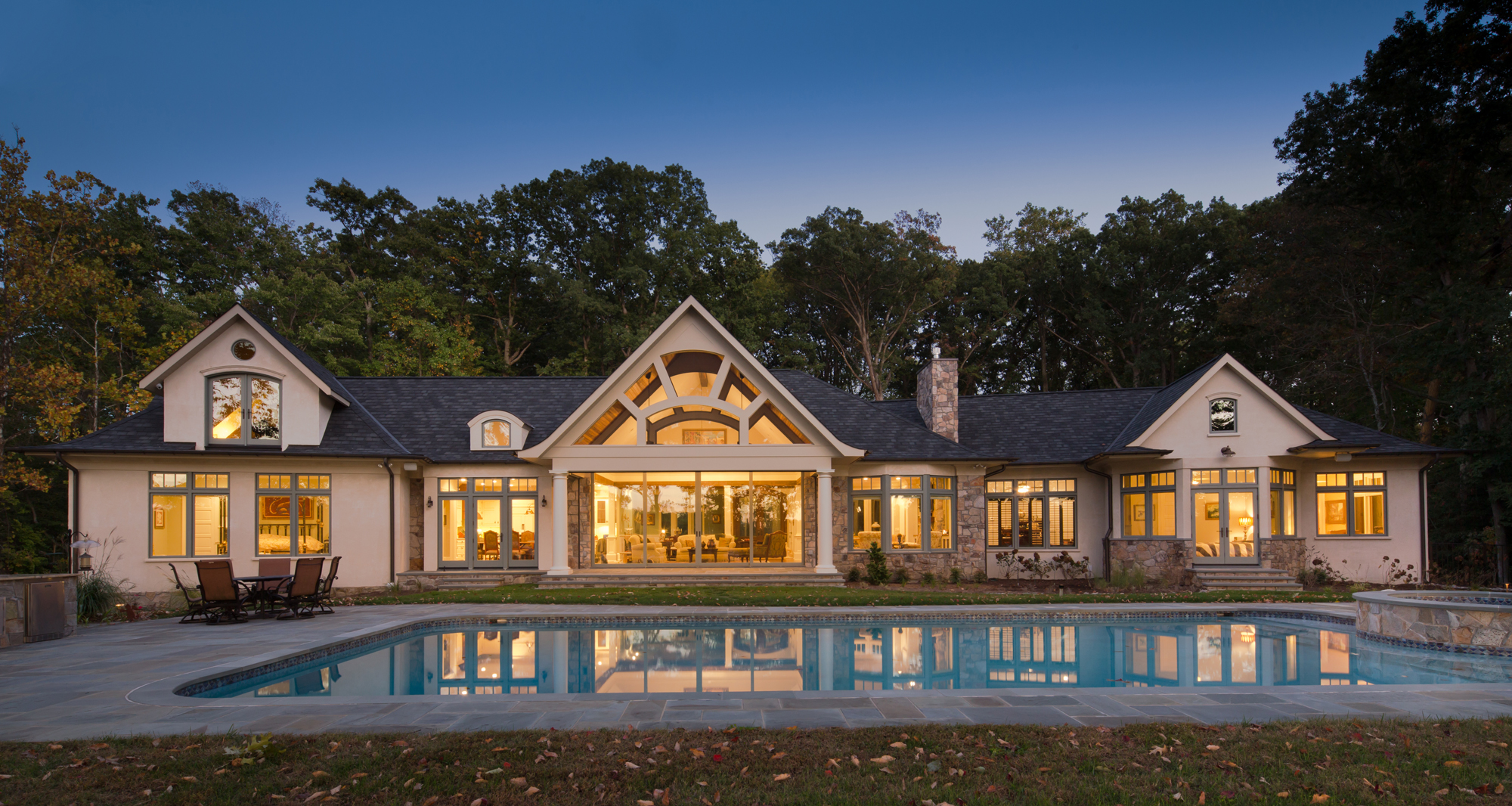 Those purchasing a waterfront home know that sometimes one must seize the moment. This is the case of a couple that bought a one-story 1950s home on a tributary of the South River in Annapolis in 2008. Its charms were submerged, to be sure, but the breeze was fresh and location superb. They lived there for five years until the homeowner knew exactly what she wanted—a French Country-style home, a waterfront gathering place to entertain friends and live comfortably. “The whole property just has a great vibe to it, a great feeling,” she said, “And this place had really good karma, it just didn’t have good bones.” 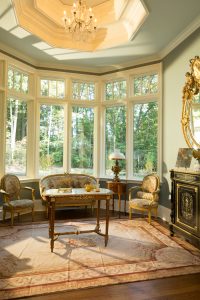 Intending to build on that good karma, she brought in Fred Sieracki, Annapolis architect, to bring her ideas to life. Sieracki has built and remodeled many waterfront homes in the historic district and throughout Annapolis. French Country, in his book, is a little unusual for our area. However, a good architect is inventive. “It’s a modern house and it has a lot of glass, but her taste is old European,” says Sieracki. “We combined the two to create a modern take on old classics.”

While the South River house can be accessed by road, the command entrance is by water. This is where the design of the house can really be seen. A massive decorative center gable makes a defining statement. “We needed a large-scale element that could read from a distance,” reflects Sieracki. He explains that the central gable ties together the home’s components: the great room, the master bedroom wing, and the guest wing.

This new home has all the essential elements of French Country-style, with its stucco and stone exterior, interior and exterior beam work, and rusticated surfaces on floors, countertops and cabinetry. There are copper details in roofing and in the kitchen. The house has a hip roof and different rooms have their own roof treatment. Inside the octagonal parlor is an extensive collection of Louis VI furnishngs.

From the custom mahogany front door to the automated screened-in porch, every detail in the house is carefully considered and artfully realized, a testament to the determined vision of the homeowner and mastery of David Carlisle of Bayview Builders. While serving as the fulltime project manager, Carlisle assisted the homeowner with material selections and physically labored on the house. The most labor-intensive part of building the house was quite possibly when the team placed the giant reclaimed timbers into the 22-foot high ceiling defining the great room. “We had to set that one in the peak by hand and that was not fun. It was mostly getting scaffolding set up and then putting it in place and having enough guys to physically lift it,” says Carlisle. “I think we had six or eight guys working that weekend.” 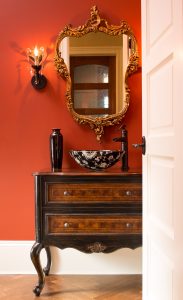 The homeowners are not the only ones who are happy. There are four rescue cats in this residence. And they get their own place of honor. The door knobs in the mud room sport portraits of all of the couple’s cats, past and present. It is not unusual for a feline to be found napping on one of the generous windowsills in the house, the girth of the heftiest cat having served as the standard windowsill measurement.

The home’s color scheme, interior and exterior, was chosen with the assistance of master colorist Karen Fazekas. Joni Zimmerman of Design Solutions in Annapolis designed the kitchen with convenience and European grace in mind. “Various elements of French Country details were incorporated into the design—the metal grills at the cabinets and desk area, beaded wainscot panels, arches and colors.” She explains that the desk area was important because the owner likes to showcase pictures of friends on her computer monitor, especially when they are visiting.

This house likes to party. In the three years since it’s been built, the couple has hosted two weddings, a bachelorette weekend, and numerous house parties. There’s a man cave with three television screens, a pool table, and a wine cellar. There’s a female version of the man cave, a third-floor idyll replete with craft area, comfy couches, and a Juliette balcony. And then there’s the guest wing. The possibilities are endless.