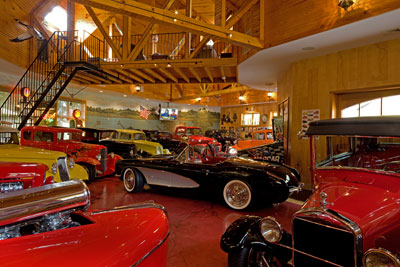 What do swamp jungles, parachutes, deserts, and search and destroy missions have to do with Arthur and Kathy Hutchins’ 3,600ft. garage? With a gleaming ‘56 Ford F-100 truck, 19 street rods and antique automobiles? Everything. “This is the truck that saved my life,” says Hutchins, pointing at the classic Ford. A Command Sergeant Major in the Green Berets from 1961 to 1984, Hutchins was a record-breaking high altitude jumpmaster, diver, and military pathfinder. He engaged in some of the bloodiest combat in the Vietnam war. His 23-year career was cut short when his chute malfunctioned during operational training in March 1983. He suffered 27 broken bones and a brain stem contusion. When rushed to the hospital, he was pronounced dead upon arrival. Somehow, he survived his harrowing plunge, but was paralyzed from the waist down.

Haunted by his experiences, Hutchins had trouble recovering. He was rescued by a good friend who, in 1983, found an abandoned Ford F-100 truck in the middle of the West Texas desert and bought it for $800 as a gift to cheer him up. Hutchins’ condition began to improve slowly as he worked on the truck from his wheelchair. Miraculously, over time, he made a full recovery and was able to walk. Hutchins got the truck running and drove it for many years. Then, in 1998, Hutchins and close friends Courtney Accipiter, Lance Accipiter, and Ronnie Carrol, worked for six months to restore the relic, from hubcaps to roof, engine to tailpipe, with hopes to enter it in the 1999 F-100 Super Nationals in Pigeon Forge, Tennessee.

Often working far into the night, the four friends performed a complete frame-off, which means they basically re-built the truck, restoring it to its former glory and then some. They painted the body Vermillion Red and upholstered the interior in Italian bone-white leather. A custom tilt column is distinguished by a La Carrera white bicycle-wrapped leather steering wheel. They found oak planks and diligently sanded and finished them to create an authentic replica of the original oak wood truck bed, accented by polished stainless stringers. With its gleaming steel runners, it is no wonder that the truck won “Best of Show” in the
’53 to ’56 class.

The Hutchins’ 13,500ft. lit driveway is composed of over 40,000 dove gray pervious pavers, installed with artistic attention to detail by Rick Heiberger, owner of the Annapolis-based Great Scapes. This distinguished drive winds past the garage to the Hutchins’ home, just beyond. With its graceful, powerful machines, polished brass, and spotless engines, this man cave is a fitting place for a retired Command Sergeant Major. It is grand, practical, yet exquisitely appointed, with walls of Norwegian Spruce and doors of red cedar. The floor is unusual. Composed of skim stone, it was designed by Fran Rausch, an artist based in Fairfax, Virginia. Rausch convinced Arthur to use skim stone instead of marble and was meticulous about the floor’s creation. “She put kneepads on to apply the skim stone, creating sculptural floor marks with the putty knife. Then, she sealed it with a sponge,” he reflects, gesturing at the vast expanse of textured floor. Two vintage gas pumps complete the scene: a Sunset Gasoline pump, discovered on the West Coast and a 1923-style Gulf pump, which arrived in 22 pieces. On the back wall, there is a giant mural, also painted by Rausch, of the Hutchins’ waterfront landscape. An assortment of waterfowl hand-carved from 100-year-old American wormy chestnut barn wood by artist Lance Lichtensteiger are suspended from the rafters. These one-of-a-kind editions, which include an osprey with a fish in its mouth, were a gift to Arthur from Kathy.

A steep stair leads to a second story loft. Here, in a comfortable sitting area with a full bar and surrounded by artifacts from around the world, one can relax on generous leather furnishings and survey the bounty below. This includes a 1941 Willys “Americar” and a 1957 Chevrolet Corvette Arthur bought for Kathy with a carbon fiber body and 2007 LS2 motor. Each car is true to the era’s style, right down to the gas pedals, yet has modern mechanics with fuel injection. She has no problem cruising both near and far to car shows with her license plate revealing Moms 57. There is also a ‘57 Ford Woody Station Wagon, with bird’s eye maple trim. Other highlights include a 1933 Willys, which looks just like a depression-era car driven by a traveling salesman, and a 1931 “gangster” car, with low seats and six-inch windshields (perfect for shooting without being seen). They are kept company by “The Rebel,” a 1932 Chevrolet painted bright orange. Many of the cars are from his father’s era, says Arthur, and remind him of his Dad, whom he sparred constantly with over the merits of Ford and Chevrolet. He points to a sign hanging on the wall. “Built Ford Tough With Chevy Stuff,” “That was for my Dad. He liked Chevrolet and I liked Ford,”
he recalls.

Arthur is continuously swapping, buying and restoring cars and attending races and shows with his family. He always has a number of projects going at one time. “This helps me forget what I have been through,” he says, gesturing at his collection and his waterfront estate. “It takes my mind off of things, the nightmares. I spent 23 years, 3 months and 29 days [in the service] in a very serious environment. I never expected to return.”

Arthur’s man cave is one in a million, worth returning to and lingering within. With its sitting areas, sound system, and bar, with sculptural birds hanging overhead from the 30ft. ceiling, it is a kind of refuge, a place where cars are ritually restored, where the old becomes better than new. Here, history may repeat itself without harm. There is nothing in this garage that does not have a story behind it or personal reference. In fact, it is much like an intense museum exhibition. Arthur admits his garage is extreme and he is proud of it. One gets the sense that he shuns mediocrity. “Who wants to get carried away by a garage? Well, I do. And if you are going to do it, do it right,” he says.

Reprinted from the Nov/Dec 2010 issue of Annapolis Home Magazine