Happy Days In A Pasadena Garage

Happy Days In A Pasadena Garage 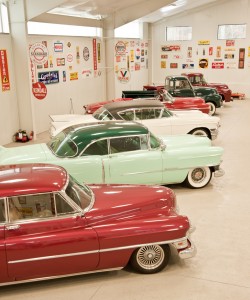 Three years ago, Steven Buck built a garage on his seventeen acre waterfront estate in Pasadena, MD, not simply as shelter to store his vintage cars, but to capture a specific era of days gone by: the 1950s. To represent the 1950s, he has recreated a Texaco gas station, and a roadside diner, complete with jukebox and baskets of (artificial) hamburgers and chips, coupled with his collection of restored Cadillacs and trucks from the late ‘40s and ‘50s. To house this collection, his “GarageMahal” is the largest garage he could build in accord with Anne Arundel County building codes. The 7,000 square foot garage, built by Cypress Construction in Odenton, could not be larger than the square footage of his house.

The 1950s is the era of Buck’s childhood, during which he grew up in the Roland Park neighborhood of Baltimore, where his family owned a vetenarian supply and pharmaceutical company. For Buck, he remembers the 1950s as a simpler time, when divorce was less rampant than it is today, when television was not a primay source of home entertainment, and when children, lacking the tech-toys of today, played outside and more actively. He reflects: “Even in the dead of winter, there was no T.V. We would go outside in the snow and play all day long.” Not all was so simple, of course; white prejudice against black people was rampant, fully illustrated in one of his collection of metal advertising signs in which a black man is portrayed as a smiling monkey. Other signs remind us how effective cigarette companies have been in marketing tobacco; from all we know today about the deadly effects of smoking, a metal sign for Kent cigarettes is especially haunting; the ad proclaims as if a matter of fact: “You’ll feel better about smoking with Kent.”

Yet for all the historical past and nostalgia for the 1950s that this garage evokes, his impressive collection of metal advertising signs, magazines, oil cans, a coke machine, gas pumps, antique toy pedal cars, and automobiles are not leftovers from his own childhood, but are objects he has collected over the years from dealers across the country, and, paradoxically, a recent form of internet shopping: e-bay. In this way, his garage reveals a man with a passion for collecting and an astute eye for display. Like an exhibition curator, Buck has built and arranged the Texaco gas station with great precision and attention to detail; the interior contains cigarette and coke machines, signage for S & H Green Stamps (an early consumer “reward” program and sales gimmick popular in the 1950s) a tire holder, cash register and receipt ticket holder, all immaculately displayed as if ready for business. From the interior of the garage, glass windows open up to his display of cars, a red 1949 Chevy pick-up truck, a black 1956 Ford pick-up, a red 1953 convertible Oldsmobile “Ninety-Eight”, as well as three Cadillac’s, a 1951 raspberry red Cadillac, a sea foam green 1954 Coup De Ville and a 1957 cream Eldorado. 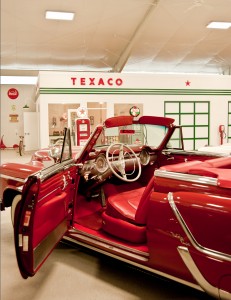 The Cadillac, an American-made luxury car that reached its zenith in the 1950s, is a masterpiece of design. The car was built not only to be a functional machine, but also as a statement of class and style. In fact, Cadillac designer Harley Early earned the reputation of “inventing the art of making cars.” Buck’s two models demonstrate their spectacular design, which echo war technology of the period. As seen in his 1954 Cadillac Coup de Ville the car includes back “tailfins” inspired by the fighter aircraft Lockheed P-38 Lightning. The early designer of the Cadillac tailfins, Frank Hershey, was also impressed by the aircraft’s aerodynamic flow and introduced the fins in the 1948 Cadillac. Yet the design appeal of these lush and elegant cars also has to do with their uncanny character in the way they echo the human body and in their gender play—their flirtatious open eyes with defined upper eye lids, their pointed breast-like forms called “dagmars”, their bulging nose or hood.

In the end, Buck’s tribute to the 1950s evokes, at least for me, not so much a longing for the earlier decade, but a sense of awe at the superb artistry of much commercial design of mid-century American-made products. In our own era of endless Chinese imports, 1950s product culture is indeed something to admire. 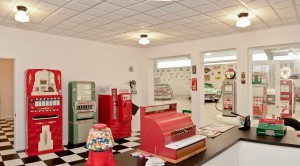