Harvesting the Edges of the Chesapeake Bay 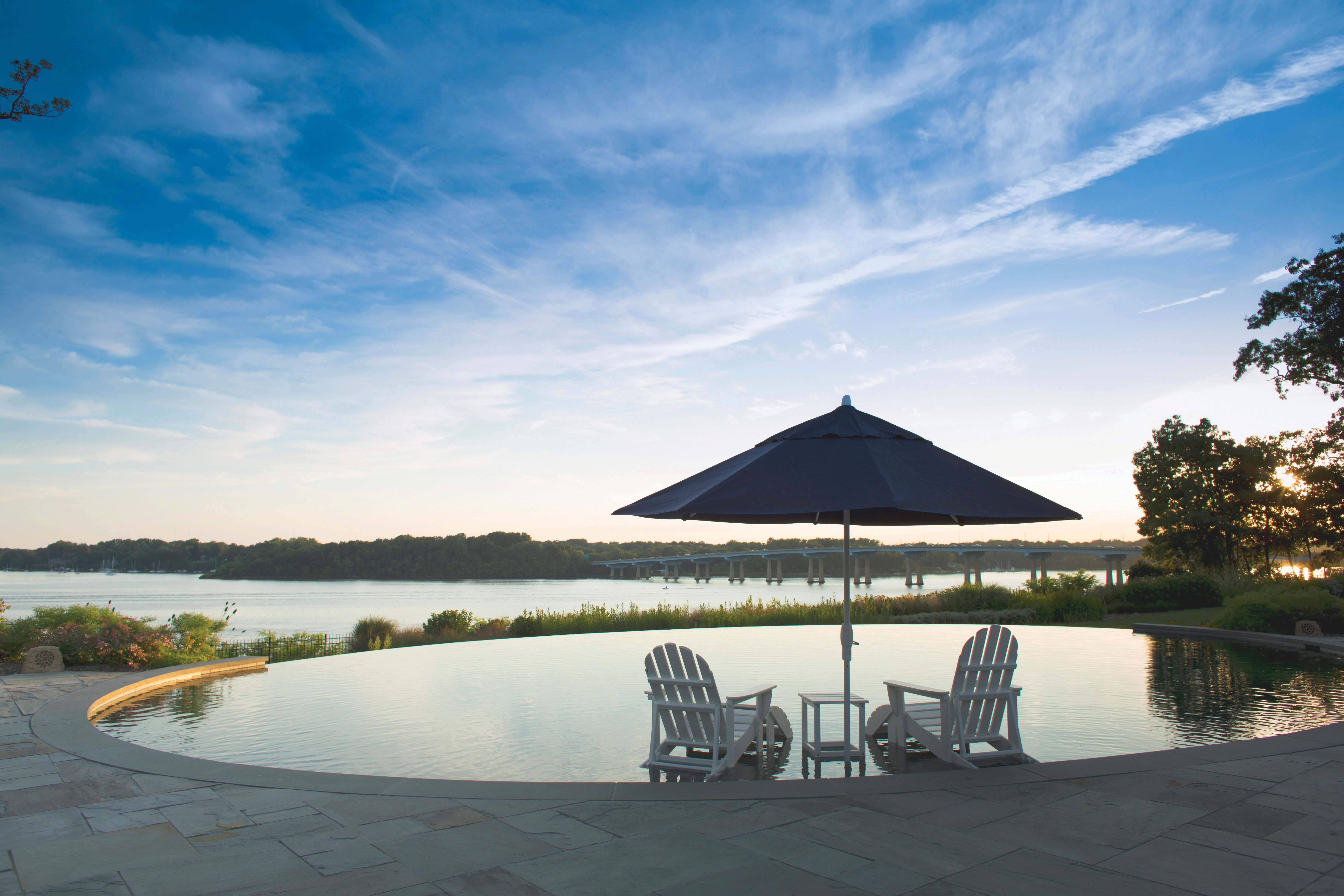 How did we get here?

The Chesapeake Bay is one of the most dynamic waterways in the world. It contains 11,684 miles of shoreline, more than the entire U.S. West Coast combined. Due to its location, shape and shallow depth, it contains a staggering diversity of organisms and a vastly intertwined web of life. It has drawn humans to its edges for food, water and transport for thousands of years.

At the water’s edge, we humans enjoy and improve the quality of our lives, but also, sadly, degrade and destroy our natural world. We clearly see the beauty and enjoyment that the bay affords us, but we are often numb to the underlying issues that threaten its future. We love the bay for everything it offers, but it is hard to wrap our minds around the critical steps needed to preserve it. As participants in the Chesapeake Bay, either as homeowners, designers or visitors, it is our responsibility to understand its problems so that we can enjoy this watershed without sacrificing that same enjoyment for future generations. With an understanding of how the bay has developed culturally over the past 400 years, perhaps we can more successfully conserve it for the next 400 years.

James Michener’s Chesapeake poetically articulates the early history of the Chesapeake Bay. Before early colonists discovered the bay, American Indians had been fishing and hunting thousands of miles of shoreline for hundreds of years. In Chesapeake, the fugitive Susquehannock Indian chief Pentaquod flees his northern tribe and travels south along the eastern shore of the Chesapeake Bay. There he finds ecosystems teeming with abundant wildlife: heron, ducks, oyster, deer, rockfish and a magnificent phalanx of geese. In Michener’s words, “[T]hese powerful birds … were so numerous he had no system to count them … . Close at hand they seemed too big to call birds; they were more like flying bear cubs loaded with edible meat.” Not only was the wildlife present in great numbers, but in great physical size as well. Largely untouched by humans, this ecosystem was in perfect balance and its wildlife prospered. 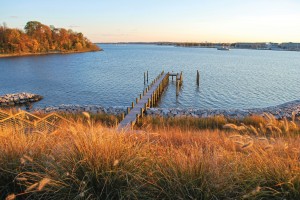 By 16th- and 17th-century Maryland, more than 30,000 American Indians inhabited the coasts and uplands surrounding the bay. They practiced agriculture but not as conservationists, as we would like to believe. They slashed and burned lands in order to create what they needed to survive. It was a land of plenty, and despite their harsh treatment of the land, their small numbers made a negligible impact on the bay’s resources. According to Michener, the American Indians had “everything [their] village required—pine trees for canoes, deer to feed us in summer, geese and oysters for winter.” Michener also makes a point of cataloging the early abundance of our iconic state crustacean: “[I]n His grace he created one thing more, to stand as a token of His eternal concern. He made the crab and hid him in our salty waters.”

Life in the Chesapeake Bay began to shift in the early 17th century. European settlements, beginning with the expedition of King James I of England, began to explore the Chesapeake Bay, claiming the newly found lands for the king. The Susan Constant, Godspeed and Discovery ships arrived in 1607. Over the course of several decades, settlers began to alter the landscape for farming and other means of sustaining the burgeoning colonies. But simply surviving was not enough. Driven by the growing demands from London, colonists soon embarked on the burning and felling of hundreds of square miles of forests in order to clear land and make room for the lucrative tobacco plant. American Indians protested and waged war, but nothing could prevent the degrading and destruction of ecosystems in order to support the lively and lucrative trade with London.

Over the next 300 years, the productivity of the lands around the Chesapeake Bay was maximized, and millions of acres were cleared for farming. In the 19th and 20th centuries, farmers began to plant more aggressively, often erasing the margins between field and forest and destroying forest buffers along waterways. When yields were deemed unacceptable, chemicals were applied, resulting in the poisoning of streams and rivers and the reduction in diversity and quantity of aquatic organisms to new lows. Over-farming and clearing left coastlines vulnerable to increasingly damaging storms and constant erosion. These factors systematically rearranged the coastal edges, with large acreages of land being lost to the bay every year. Since the 1700s, it is estimated that more than 60 percent of all wetlands in the Chesapeake Bay have been destroyed. 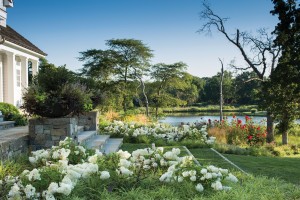 Modern residential development has significantly influenced the evolution of the Chesapeake Bay edges as well. Since the end of World War II, landowners have harvested the edges of the bay at an increasingly alarming rate. It began with cottage communities, a summer extension of urban living, popping up along coastal areas. Density followed, resulting in pressures on sensitive banks, beaches and coastal edges. Shoreline protection began with light measures, but quickly developed into armored banks of stone and wood bulkheads. These incursions by man ultimately altered the geomorphic patterns of sand drift and wetland development, and often severed the ecological connection between land and water. Sand that once provided for beaches, spits and sandbars was no longer able to do its job naturally. “Dead shorelines,” protected by stone walls, increased in number, while unprotected adjacent areas began to erode and decline at an accelerated rate.

While fragments of Michener’s idyllic Chesapeake Bay still exist, thousands of acres of forests, meadows, shorelines, marshes, inlets and rivers have been eroded and degraded by the impact of man throughout the last 400 years.

How can this understanding help us conserve the Chesapeake Bay for the next 400 hundred years?

I like to view the world as a continuum of experiences, from those who came before us to those who will follow in our footsteps. We are not journeying alone, and our impacts on the natural world can be both positive and negative. The past is never forgotten by nature, and we can learn from the mistakes that have happened before our time. Moreover, the future is never far away (sometimes only seconds), and we know that our actions impact the world and lives of those who will come later.

In our rapidly changing coastal landscape, it is imperative that we be thoughtful participants, both individually and collectively, in the fight for the Chesapeake Bay. But how can we accomplish this? We might drive less, buy local foods, reduce our nitrogen footprint or improve our septic system. We might make our homes more energy efficient, build a rain garden or invest in local bay preservation organizations. Individually, we are called to rise up to help solve the environmental challenges of our community. In doing so, we must ask the right questions: What is the environmental baseline? How can the design of where we live affect how we live? How can we affect environmental change in a way that matters? What laws on the books, such as the recently vulnerable Chesapeake Bay Program, make sense and need protection from human tendencies? In the next edition of Annapolis Home, we will suggest actions through design and advocacy that can move the dialogue toward a healthier Chesapeake Bay.

Kevin Campion has lived in the Chesapeake Bay watershed his entire life and has owned Campion Hruby Landscape Architects in Annapolis, Maryland, for the past seven years. Kevin earned a bachelor’s degree in landscape architecture at Penn State University, and a Master of Philosophy with a focus in landscape conservation from the Edinburgh College of Art in Scotland. He is a registered landscape architect in the state of Maryland and an active member of the American Society of Landscape Architects.