High-Tech on the Potomac

High-Tech on the Potomac 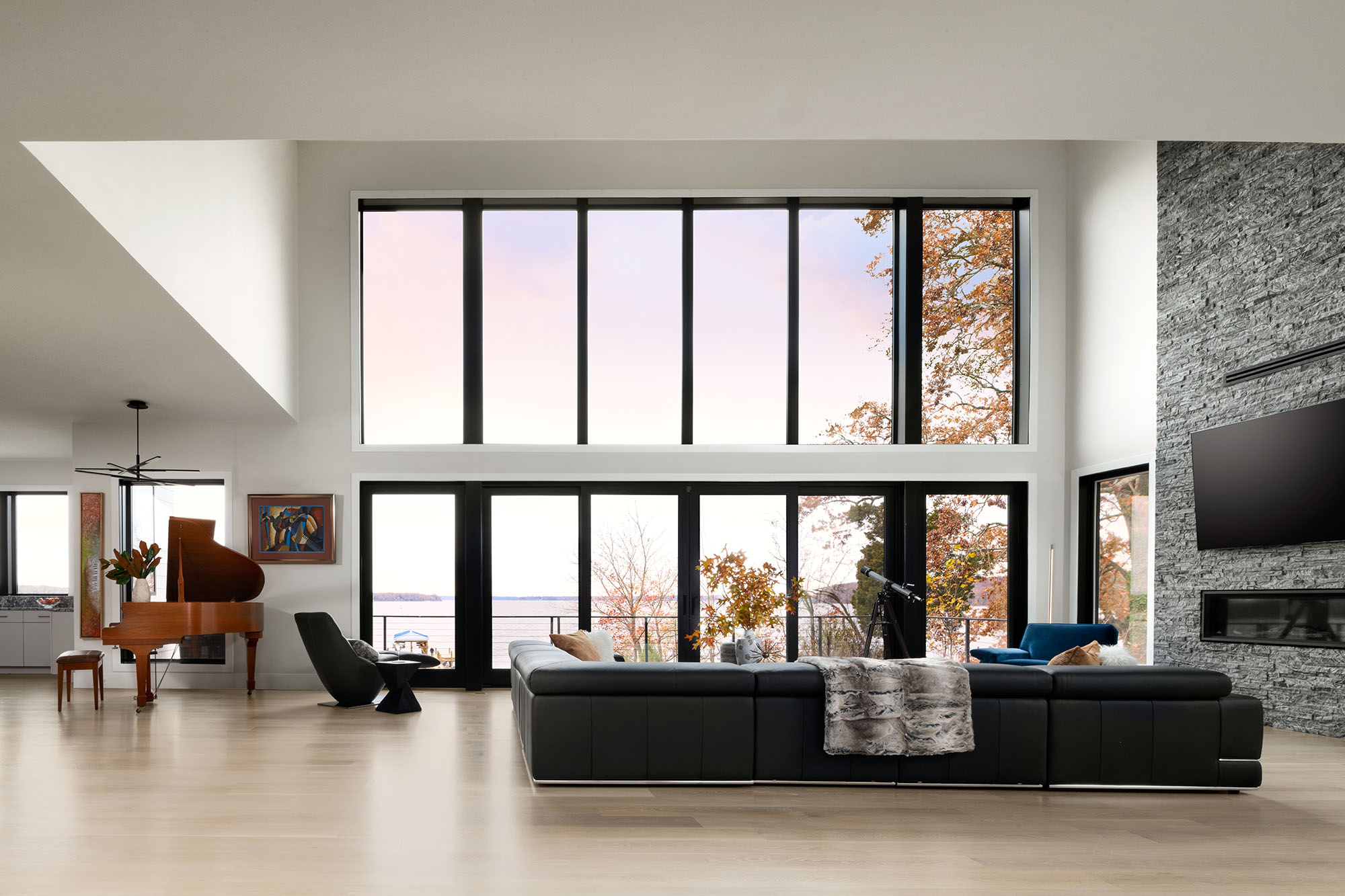 As Ronal Butler was sketching out his dream home in his head, he knew that the view would be the star of the show. And it is. In the 8,500-square-foot home Butler created with wife Martha Lloyd, the two-story window wall reveals a sparkling, unobstructed view of the Potomac. The view is what attracted him to the land, but he wanted a co-star: technology.

In today’s world of gleaming high-tech homes, the one the couple shares is next-level. Butler, the owner of a technology firm that services the federal government, has an insatiable need for technology. He is not just driven by the latest developments in the field, which he exploits to the fullest, but his eye is set on the future. He doesn’t want what everybody else has; he wants to have what everybody else wants.

Almost every room has a well-thought-out, inventive, automated component. Butler jokes that he thought more about the technology than how the house would be furnished.

In fact, technology is, in a sense, part of the home’s design scheme. It is intelligent, comfortable, and perfectly synched to the couple’s lifestyle. The furnishings are minimal, clean-lined, and neutral. The living spaces are uncluttered by cords or clunky devices. Yet, you know there is more to the house than meets the eye. It feels strangely alive and ready to respond with “your wish is my command,” at the tap of a button or by a verbal request from its owners. This house doesn’t disappoint.

As visitors stroll from room to room, Butler talks to his home, and it responds: lights dim, the music selection changes, one window blind lowers halfway. Right off the foyer, a circular glass pneumatic elevator whisks its owners from floor to floor by voice command. Each of the home’s 11 televisions, lights, thermostats, alarms, home theater, sound system, and most of the window coverings can be manipulated by voice and/or computer device.

Butler has written custom routines into the voice system where one command can perform multiple functions. For example, an instruction to turn up the overhead lights in the theater also controls the wall sconces and the lights on the theater stairs. A built-in flat screen in the master bedroom glides forward and then swivels at the perfect angle for Lloyd to watch TV in bed. Butler jokes that when the time comes, even the Christmas tree will have a technology component.

“In our previous home, we added technology where we could get it in, but with this house, we built it into the infrastructure.” Butler admits that his need for seamless technology was a challenge to the builder and to technology companies who would be tasked with outfitting the house. “We were asking for things they had never done,” Butler says. “In the theater, for instance, we wanted the drapes to open on command to reveal the screen. One company told me that they couldn’t do it, and another company tried to convince me that I didn’t want it.”

Butler said he ultimately settled on the Richmond, Virginia-based tech firm Livewire LLC to oversee the technology build-out. “They never said no, and they found a way to do what we wanted,” he says. “The CEO even came to our house to make sure they got it right.”

But not everyone got things right in the beginning of the five-year project, completed just last year. Butler said he considered three builders before settling on Joy Design + Build, a custom builder based in McLean, Virginia, with experience building waterfront properties. Butler said he chose Joy because the company listened, and he felt the process was collaborative. They both wanted the same thing: a successful project where everyone walked away satisfied.

This goal has been achieved. With its geometrical angles and modern form, the Lloyd/Butler home stands out from its mostly traditional brick-and-stone neighbors. Its exterior is a combination of white stucco and black metal with brown, horizontal Trespa high-pressure laminate panels that have the look of wood and hug the top of the house.

Liam Sullivan, who worked closely with the couple for Joy Design + Build,  credits Butler and Lloyd with knowing what they wanted, which led to a relatively smooth build. “It is incredibly helpful when someone has a vision, and we can play off that,” Sullivan says of Butler and Lloyd’s decisiveness. “It was a collaboration, and we wanted to help them get what they wanted.”

The contemporary home, with its abundance of windows and water views, is a full-circle moment for Butler. As a young man growing up in Detroit, Butler used to leave home 30 minutes early most days before heading into his high school concession job at the Detroit Zoo. He used the extra time, he explains, to drive around the waterfront community close to the zoo, where he would admire the homes and daydream about the lives of the people who lived there.

“There were a lot of houses on the lake, and you would just drive around and see all the glass in the back,” Butler says. “I didn’t know people could live like that because it wasn’t like that where I grew up.”

Today, Butler and Lloyd are the people in Butler’s daydreams with an affluent lifestyle fueled by two successful careers. “We feel very fortunate,” Butler says. “We couldn’t ask for anything more. There are no existing technologies or features out there that we have not incorporated in this house,” he says. “This home is a literal expression of our dream.”