BY DYLAN ROCHE
EXTERIOR & INTERIOR AFTER PHOTOGRAPHY BY LAURA METZLER 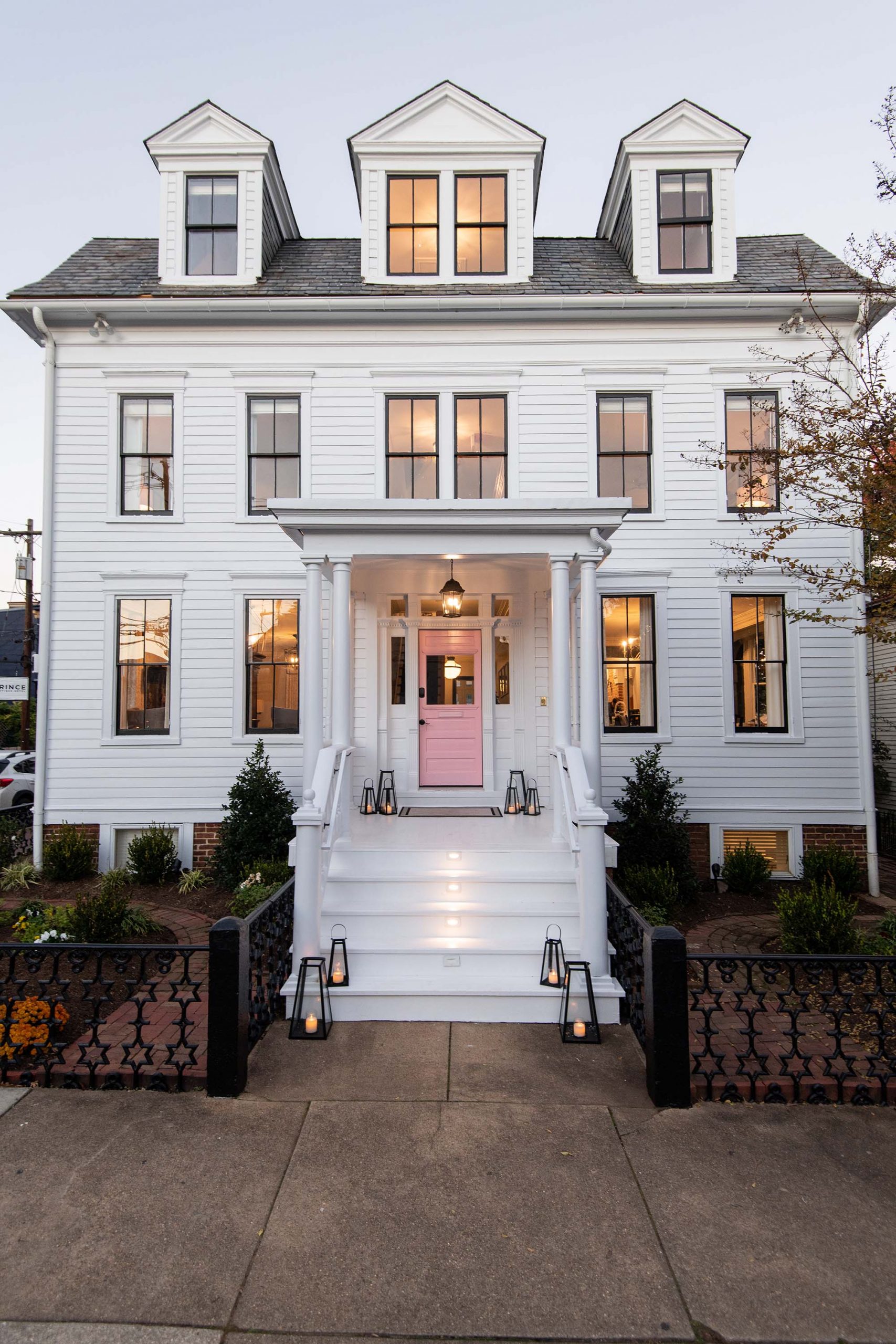 “New York boutique brought to the Chesapeake Bay.” That’s how Arlene Critzos, principal and president of Interior Concepts Incorporated, describes 134 Prince, the luxury hotel she and members of her team recently designed for the property’s new owners, Cody Monroe and Clinton Ramsden. Monroe and Ramsden were intent on creating a hotel experience that’s distinctly Annapolitan and the description—“boutique”—reflects the trend of travelers who seek unique lodgings that are every bit as special as their destination.

Two U.S. Naval Academy graduates (2011), Monroe and Ramsden bonded over their interest in real estate development during their time in the Navy. This led to their endeavor to “rehabilitate” the 1849 property on Prince George’s Street in the heart of downtown Annapolis, combining its historical charm with modern amenities.

And what a transformation the building has gone through. Many Annapolis locals will undoubtedly recall the bright blue exterior with its gaudy yellow trim, reminiscent of the Painted Ladies of Alamo Square in San Francisco or Charles Village in Baltimore. But far from following a trend, the previous owner was simply paying tribute to the Naval Academy, according to what Monroe and Ramsden were told. The hotel has now been toned down to a tasteful white with a light pink door—and that’s just the start of the transformation.

Previously, the 4,000-square-foot Dutch Colonial was dated and reflected a mishmash of styles, decorated with “whatever [the previous owners] could find to put these rooms together,” says Andrea Blamphin, senior residential designer with Interior Concepts. Blamphin, along with residential designer Megan Ligday, was part of Critzos’ team that worked on the hotel, transitioning the rooms from cluttered, boldly colored, over-textured and over-patterned eclecticism into something contemporary and quiet.

Much of the change focused on emphasizing the natural beauty of the original features of the house—the hardwood floors, the brick fireplaces, and the molding. “Guests will comment on the imperfect wooden floors; they love to see the waviness in the original single-pane glass windows that have been warped over 150 years. That really resonates with guests,” says Ramsden. “Any attempt to change that historical aesthetic would ultimately not serve the interests of the guests and of the hotel.”

While little historical record is available about the original builder and owner of the house, Monroe and Ramsden have taken care to understand as much of the backstory of the property as possible. They explain that the house was built with ten bedrooms—eight upstairs across the second and third floors, and two in the basement. The only bathroom was a half-bath on the ground floor, designed to serve the entire household.

Over the years, half the bedrooms were converted to full baths to make the house more accommodating. Monroe and Ramsden believe the building served as a private residence for much of its history, though it had been a bed-and-breakfast for 13 years before they bought it in 2019.

Paying tribute to centuries past played into the vision Interior Concepts had for the design—most notably in the hotel’s lounge, a room dominated by an enormous work of sepia-tinted art that hangs behind the sofa. The print depicts people of a nondescript past century beneath tall, widespread trees—an image Blamphin describes as “a snapshot of another time, a generalization of a historical time.” It isn’t Annapolis in the 19th century, but it evokes a sense of yesteryear that Blamphin expects will remind guests of “the roots of this area.”

Interior Concepts drew inspiration from this artwork to design the contemporary color scheme for the room. The original wood mantel over the fireplace, along with the lantern-style lights hanging from the ceiling, give a nod to history. By contrast, the mixed-metal coffee table keeps things just modern enough for guests to feel as if they’re in the 21st century.

Interior Concepts maintained the same sepia-inspired neutral palette throughout the rest of the hotel, accenting the light walls with touches of black, metal, natural wood, and brick. The result is an elegant, comfortable atmosphere Blamphin says will serve as a “blank canvas for their guests and events.”

Across the hall from the lounge, the dining room and kitchen similarly maintain the building’s historical elements while emphasizing comfort and practicality. Monroe vividly remembers considering taking out the built-in shelves in the dining room—until the Interior Concepts team encouraged him to keep them. “They said, ‘No, no, that adds wonderful dimension to this room,’” he explains. “‘What you need to do is get rid of the books and just paint them white.’ And so, we did just that—and it really shines now.” The shelves, which once held stacks of books, magazines, and knickknacks, now hold a select few old books and accessories. They also serve as a nook for coffee and tea service.

The flight of stairs, cleaned to showcase the beauty of the original wood and fitted with a custom runner, leads to the second and third floors, where each suite has a signature color that pops out from the neutral backdrop. “If you strip away some of the accents in terms of lamps, pillows, accessories, they have a commonality to them,” Blamphin says. “But there’s a common thread of fabric, tone, textures, finishes—they’re all similar, room to room.”

One of the hotel’s standout rooms, the Presidential Suite, finds character in the exposed brickwork and wood beams crisscrossing overhead. These wood beams have been fixed with lights that aren’t visible from the room below, but when they’re illuminated at night, they shine uplighting on the ceiling overhead, an effect Monroe and Ramsden refer to as “star lighting.”

Following the redesign, Monroe and Ramsden see the hotel as more than just a place where guests can lay their heads on a pillow and get some sleep. They see it as a place where visitors can feel closer to Annapolitan comfort, a place where they can appreciate the historical significance of an old house and, by extension, an entire city. As they see it, the newly designed hotel should serve as a focal point of a tourist’s visit and reflect what they are coming to Annapolis to enjoy.