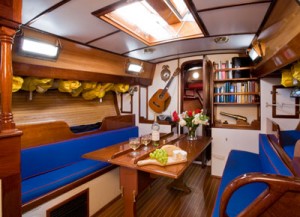 In the hottest summer months, boats, for many in Annapolis, are floating second homes ideal for wandering the Chesapeake Bay. Arthur “Art” Birney’s 56-foot schooner Adventurer, with its generous cockpit, roomy cabin, seven bunks, and two bathrooms, is ideal for comfortable cruises and also for racing. Schooners, double-masted and stately, are fast boats. With a sleek hull, and three or more large sails, they almost glide or “scoon” (Scottish for “skim”) gracefully across the water. What’s more, they make a great impression when docking. Adventurer 56, designed by John Cherubini, a yacht designer and aeronautical engineer, has majestic lines, bowsprit, and a schooner rig that recall great classic sailboats, such as the schooner America, the clipper ships, the Grand Banks fishing schooners, and racing schooners of the 1930s.

However, it takes a certain kind of person to sail a schooner. Birney, winner of some of Annapolis’ most famous races, including the Annapolis-Bermuda race and Great Chesapeake Bay Schooner race, puts it this way: “Schooner guys don’t say hello when they meet each other, they say ‘Ahoy!’ or ‘You scurvy dog.’ ” Or, he says, they may skip the small talk altogether and just say ‘Arrrrr.’ His nephew Duncan Hood, co-founder of the Chesapeake Sailing School, former captain of the Woodwind schooner, and American Sailing Association Instructor Evaluator, is more verbal: “Schooner people are different, and yes, hard to define. They do say, ‘ahoy.’ And, lots of times they have buttons on their flies instead of zippers.”

Birney, a retired Washington business man who chairs the National Sailing Hall of Fame, he waited for just the right moment to buy his first schooner. Thirty-five years ago, while living in Washington, D.C., he docked a sloop at Port Annapolis Marina in Back Creek, a quiet estuary just off the Severn River. One day, he got tired of paying his bill. “I was pissed off at all the slip rent I was paying, so I bought the place,” he reflects. Now that he had a proper home for a schooner, The Port Annapolis Marina, he began to shop around, hoping to fulfill a boyhood dream. “When I was about 13 or 14, I would row out alone and circle this beautiful 80-foot schooner and imagine that I owned it. It may have been built before World War I. It was named “Adventurer.” It was yar,” he says. He explains that yar (not to be confused with arrr) is a high compliment, surpassing adjectives such as amazing and extraordinary.

Birney purchased his schooner in Gulfport, Louisiana, from a divorced man whose brand new wife gave him an ultimatum: “It’s the boat or me.” She won. Birney discovered the faded beauty land-locked in a boatyard, her fuel tank half-filled with water and in grave disrepair. “She was in very bad shape. I test-sailed her and rejected her,” Birney recalls. “But then I thought, “hell, you own half a boatyard. What’s wrong with you?”

So, he bought and restored Adventurer. Now, her portholes are spotless, her beautiful teak trim, freshly varnished, glows in the sunshine. Birney sails and races Adventurer frequently on the Chesapeake and beyond with Hood and crew. Adventurer has won her class repeatedly (1995, 1999, 2000, 2006, 2010), twice with all-over honors, in the Great Chesapeake Bay Schooner Race, an overnight race that requires a crew of about ten. Hood recalls a harrowing moment during last year’s race, which included luminaries such as Pride of Baltimore II, Woodwind, and Virginia. With the wind behind them, they had rigged the spinnaker and were speeding along. “It was 3 a.m. in the morning and we were traveling much faster than we should have been, because we wanted to win the race. Then, the spinnaker spun out and blew into smithereens,” recalls Hood. “And I don’t mean smithers, I mean smithereens.” Birney heard the commotion from down below. “The boat shuddered much like a dinosaur falling to the ground after eating poison,” says Duncan. With no time to spare, they tidied up the deck and went on to win the race.

This is but one example of how schooner people are tougher than most. “You can’t mind hard work, terror, and danger,” says Birney, or sleepless nights. It seems that most things go wrong between 2 a.m. and 3 a.m. in the morning, reflect Hood and Birney. Yet, Birney and Hood take it all in stride. With crew, family, and friends, they put blown-out spinnakers and backed-up heads (bathrooms on boats tend to overflow easily) behind them, and relax in the mahogany cabin, sipping spirits stowed in an ingenious wine locker built into the table and reaching for books held in place by fiddlers, bars that hold gear securely when the boat heals or rolls. Also, there is music and poetry. Birney may recite a ballad or poem he wrote while Hood takes the guitar, secured with Velcro, off of the wall to strum and sing. Of course, there is food. The galley is efficient, with a double sink, gimble stove, and oven, “naturally broken,” chuckles Birney. However, in heavy winds, cooking is not exactly easy. So, they usually heat up a pre-made stew. “Cooking when your boat is listing 30 degrees is insurmountably challenging. It’s only good if you want to wear your food,” says Hood.

Keep in mind that there are many ways to rig a schooner, or as Birney says, “to skin a cat.” Like the vessel, schooner folks are more versatile than you would expect. For instance, beneath Birney’s salty dog exterior is a poet who composes lovely lyrical poems. Beneath Hood’s quiet air is a talented actor. He works often for Annapolis’ Colonial Players. And, he is appearing with Clint Eastwood in the upcoming film J Edgar. Last year, he launched My Way Foods with two friends. The company offers Crab Cake Secret, an award winning “secret” spice mixture handed down for a generation.

He will not part with his secret spice recipe. But, he does reveal how he and his Uncle Art manage to stay sane despite hair-losing adventures. Positive thinking is not their mantra, which is somehow downright refreshing. Hood shares his outlook with a deadpan grin. “Adventure is just a romantic word for trouble. Everyday I wake up expecting things to go wrong. And, when they go right,.” He says this like a true “schooner guy” because, like his Uncle Art, he certainly is one, except his fly is zippered not buttoned, perhaps this is a nod to a new generation.