Modern Home on the Magothy 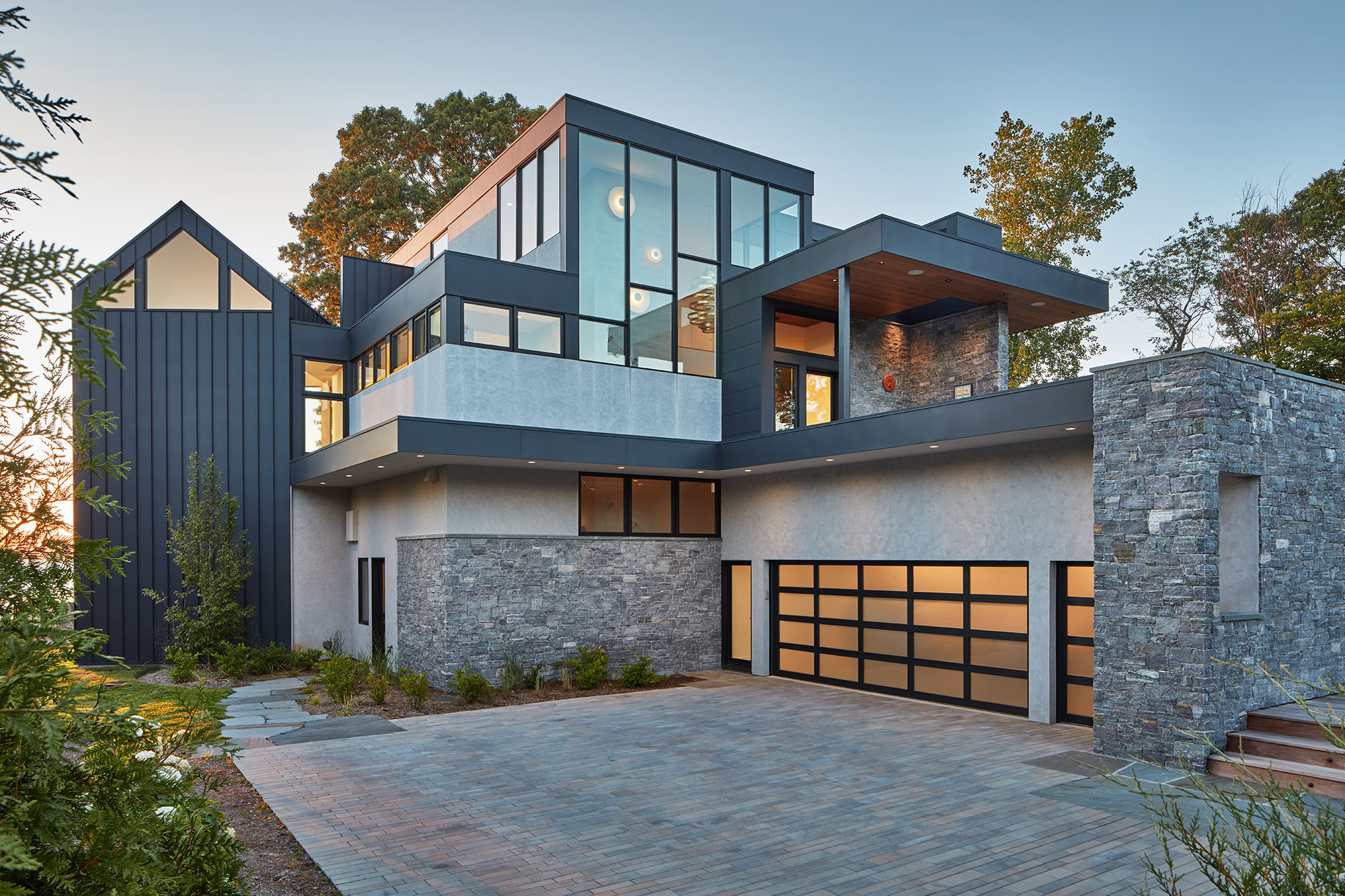 When Chip Bohl and his team at Bohl Architects began work on a waterfront residential project in Arnold, they found themselves faced with unusual challenges. First, as is always the case with a waterfront home, to maximize the view of the water; second, to create a sense of privacy by minimizing the view of the surrounding neighborhood; and third, to preserve the ancient oak tree in the middle of the backyard.

Thanks to the Bohl team and Dave Carlisle and his team at Bayview Builders, the result is a success on all counts: a beautiful contemporary home whose style influences reach back to De Stijl (from the Dutch, literally “the style”).

Like the Rietveld Schröder House, a De Stijl icon built in the Netherlands in 1924, it feels open, almost wall-less—something Bohl describes as “a blending of the inside and outside.”

Angela Healy, an architect with the Bohl team who worked on the home, says the architecture here disproves a popular misconception about contemporary design. “You know, a lot of people will say that doing something labeled contemporary can be cold or very sparse, but we don’t believe in that,” she explains. This is a place, she adds, where you can feel “as comfortable in a black-tie as you are when you’re barefoot and in swim trunks.”

The house’s open floor plan is divided into four primary living spaces on the ground floor—the living room, the study, the kitchen, and the dining room, all united by an expansive view of the Magothy River through floor-to-ceiling glass. Each space is finely furnished with contemporary furniture selected by interior designer Donald J. Wooters and lit with such fixtures as the Lolli chandelier by Oly Studio in the dining room and the Vertigo chandelier by Corbett Lighting in the hall.

The architectural design of the floor plan takes advantage of what Bohl describes as the unique conditions of the waterfront, the views, and the neighborhood. “The floor plan is arranged in a crescent shape that allows each room to have a different view orientation to the water and horizon,” he says. “This layout expands the variety of ways the interior of the home can engage the view. The library and dining room at each end of the crescent plan have glass corners that expand the horizon view further.”

One factor contributing to the illusion of the outside extending to the inside (and the inside extending to the outside) is the consistency of building materials. The granite stones used on the exterior of the home and the front terrace are also used on the hearth in front of the fireplace. With only a glass window dividing the hearth from a stone bench out on the front terrace, it looks as if elements of the living room are reaching beyond the interior into the exterior space.

The granite was sourced from out of state, yet its appearance ties the home to its natural surroundings. “We picked it primarily for the color, and because it looks like the granite you see here on the shoreline,” Healy says. “We wanted it to feel very much a part of the local flavor.”

Additionally, the ethically sourced mahogany used to build the front door continues into the foyer, where it panels the ceiling.

A modern house with minimal ornamentation may seem to be less complicated and costly than a traditional design with elaborate moldings and trims. That is not necessarily the case, according to Carlisle, who says that with a modern home “there is less room for error.” For example, there is no trim on the first floor to hide joints so they must match up perfectly.  Creating the De Stijl illusion of openness posed what Neil Thompson, construction manager with Bayview Builders, calls “a multitude of challenges.” Specifically, the open floor plan on the ground floor meant limited support for what was built upstairs. “If you notice, there are no interior walls holding up this second floor,” he says as he indicates the living room that segues seamlessly into the kitchen on one side and the study on the other. The solution was steel structures. “There’s steel structure throughout this whole entire house that’s supporting all this openness,” he explains.

Details of the house called for close collaboration between the architects and builders to turn big ideas into reality. One instance, Healy explains, is the skylight in the study: they wanted to design it to catch light from one direction but not the other. “The most beautiful light is north-facing light, which is why most artist studios and photography studios face that way,” she says. “We wanted to capture the north light for this library but not the southern light, which can be really harsh.” This architectural idea required Bayview to “execute challenging material transitions and implement multiple layers of functionality,” Healy explains. All of this was what she described as “a labor of love” to achieve the desired effect.

Another unique aspect of the architectural design is the way sightlines on the street-facing side of the house avoid most views of neighboring houses, creating the illusion that the house is not only open and airy but also secluded—somewhere far away from a suburban community. “We were careful and deliberate in the sight planning of this house,” Healy says. “So that when you’re within the house, it’s all about the view, and you don’t even realize there are neighbors.”

The Bohl team achieved this effect by putting careful thought and attention into the house’s 3-D shape, finished floor elevations, and

siting, all of which “maximize the house’s privacy from its suburban neighbors while enhancing and connecting the expansive horizon line of beautiful water views to all of the main interior spaces.”

Exploring this collaboration between architect and builder proves Healy’s perspective is right: Contemporary isn’t cold or sparse. Instead, the modern home feels like an escape, a place of beauty and relaxation, where a panoramic river and ancient oak make you forget that the rest of society awaits just beyond the front yard.