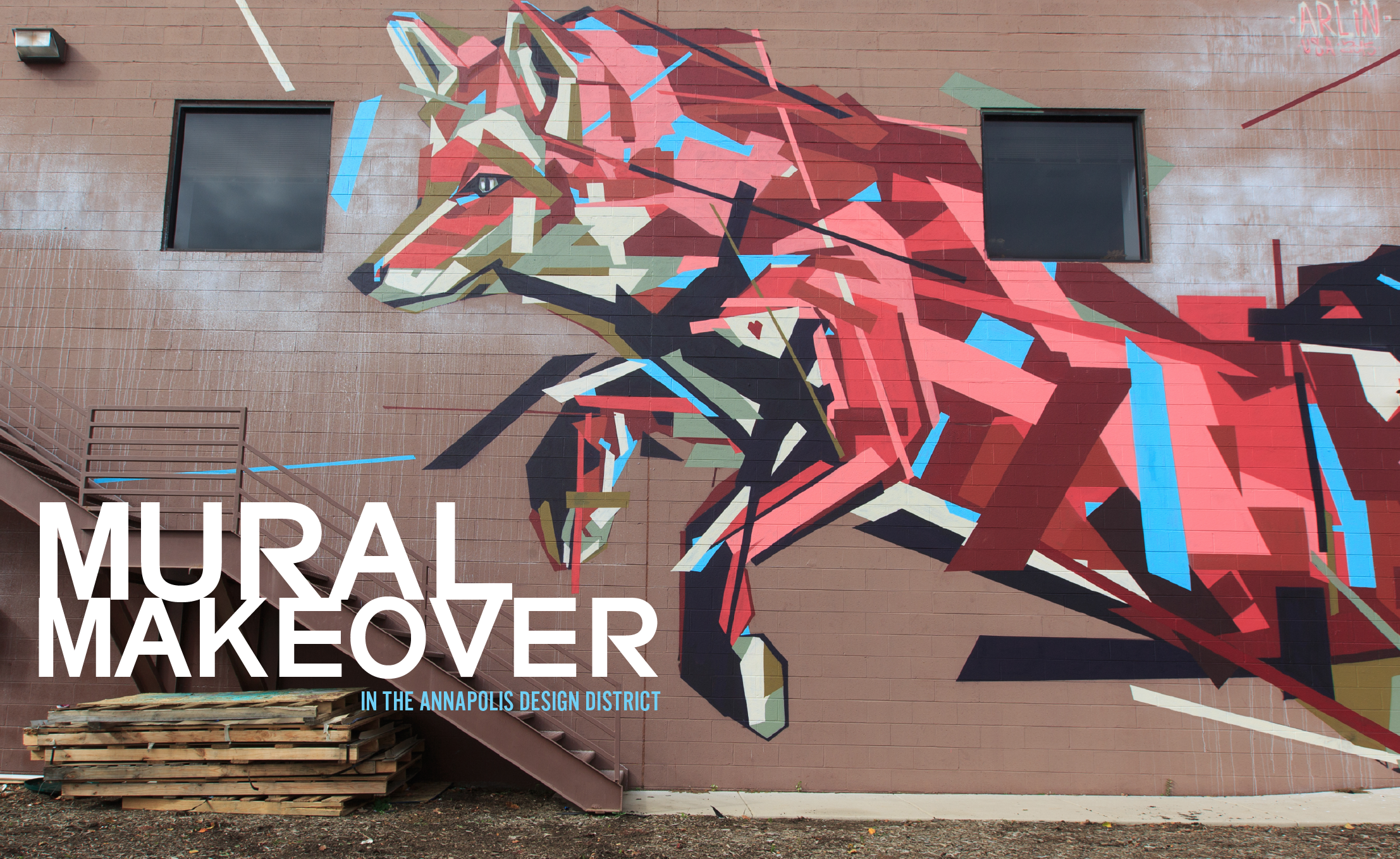 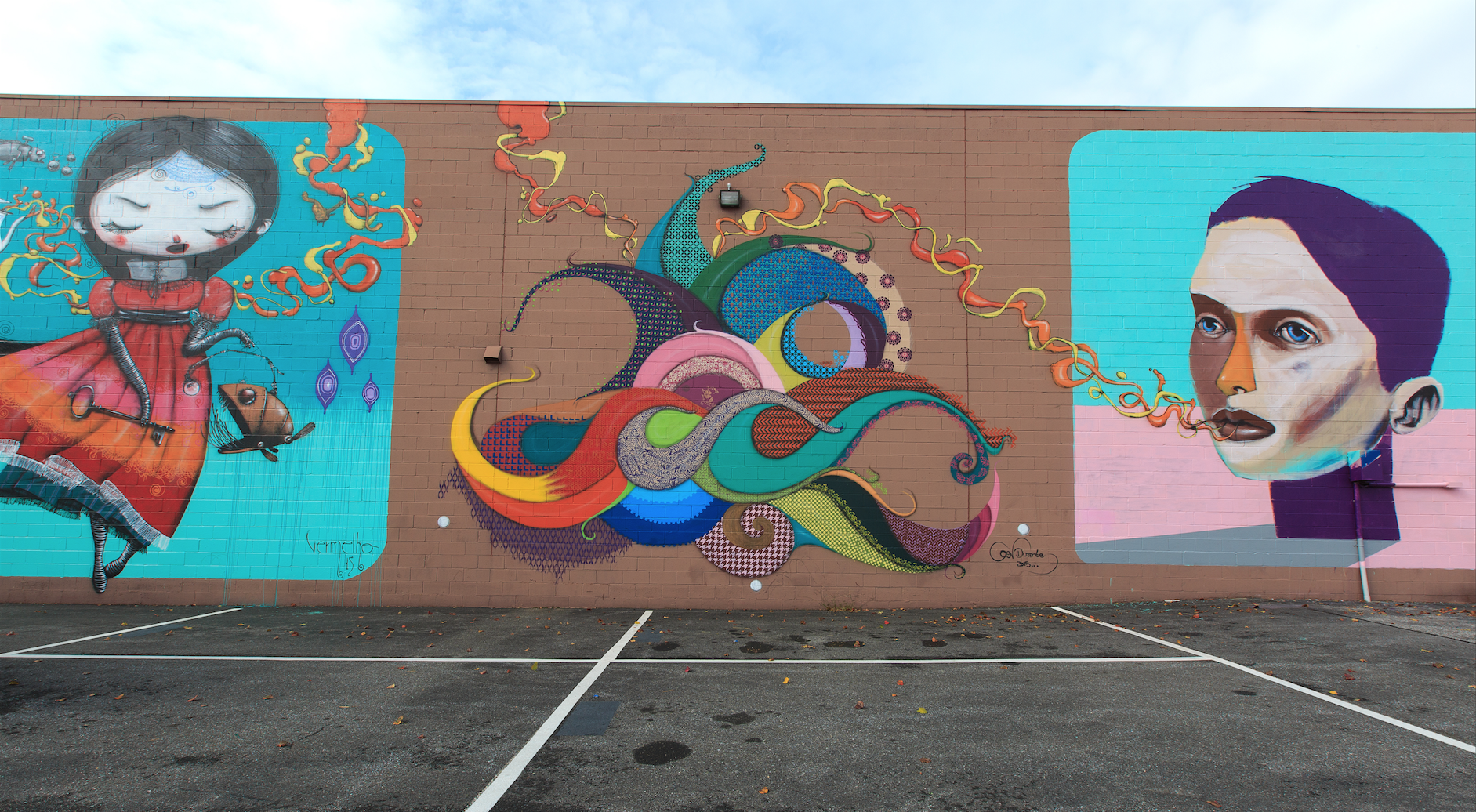 The Annapolis Design District is thriving. If you’ve never had a reason to check it out, you sure have one now. Part of today’s international art wave has swept into Annapolis, and now, after a kick-off street fair, eight impressive murals by six Brazilian artists and two local artists enliven a two-block stretch of Edgewood Avenue.

According to Jessica White of Kitchen Encounters, one of the things the District has been focused on is “making the area more inviting.” The Design District, composed of over fifty members, contributed money to support the mural projects, and landlords and business owners bravely provided wall space without knowing the outcome.

The artists are sponsored by Urban Walls Brazil, a local arts organization founded by Roberta Pardo, who lives in Annapolis. A native Brazilian, Pardo grew up in São Paulo. She started UWB not just to be a virtual dealer of contemporary Brazilian art but also to facilitate an artistic and cultural exchange between Brazil and the United States. 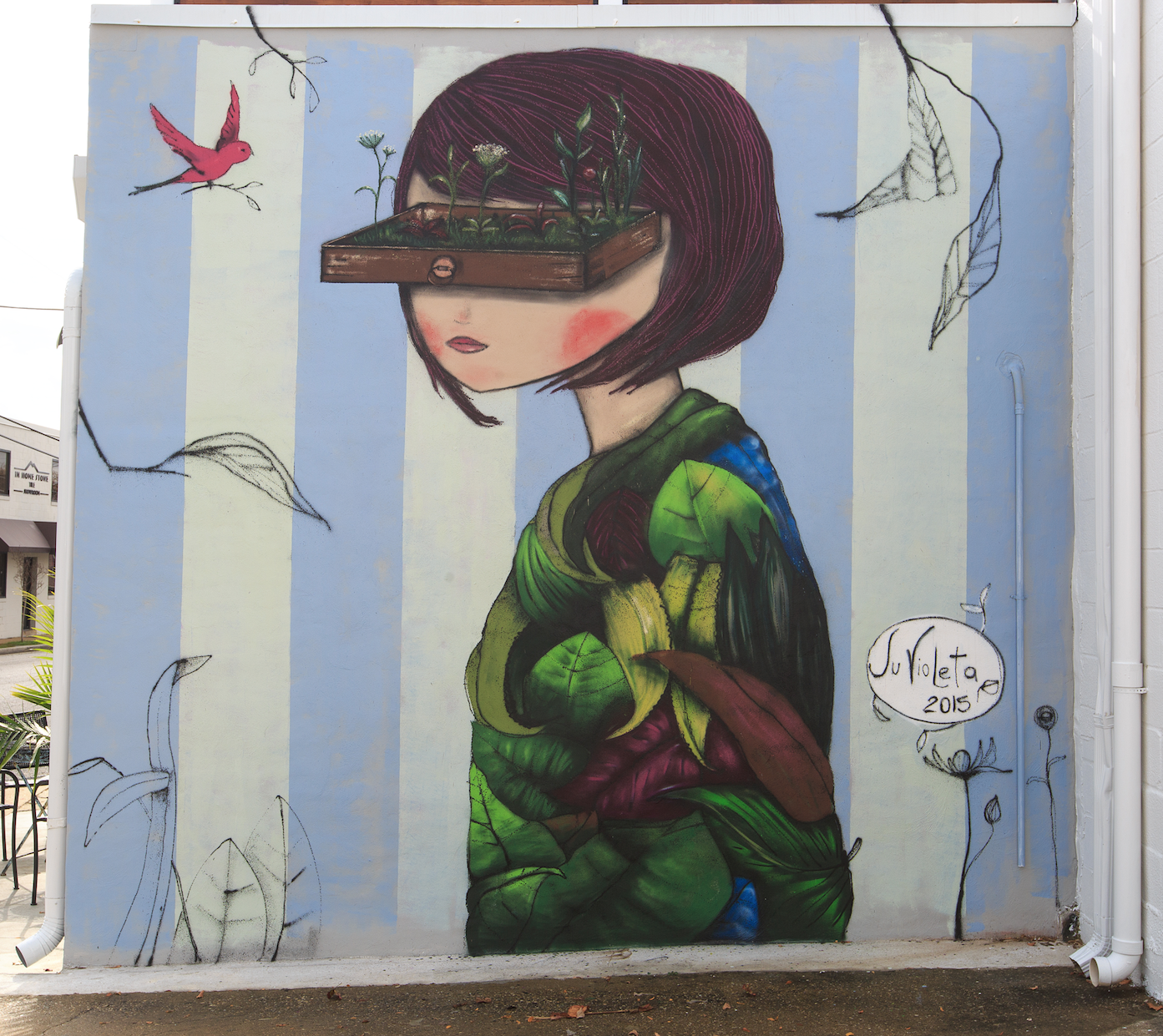 So what did these six artists choose to paint for Annapolis? Well, not sailboats. The only thing with even a whiff of maritime is a fish that appears in the two paintings by Vermelho. It’s armor plated, with a mouth full of nasty teeth. His paintings are dreamlike in their ambiguity, exploring the tension between good and evil. The work is cartoonlike but by no means cartoonish.

Rodrigo Branco also plays with ambiguity in his painting. While he has given us a fairly straightforward portrait, it is unclear if the face is that of a man or woman. Sexual ambiguity is not a new subject for artists. What is more interesting here is a different kind of ambiguity—the haze of memory. Branco’s father died when Branco was a young child. His memories are shaped by old photographs, relatives’ faces frozen in an increasingly distant past. 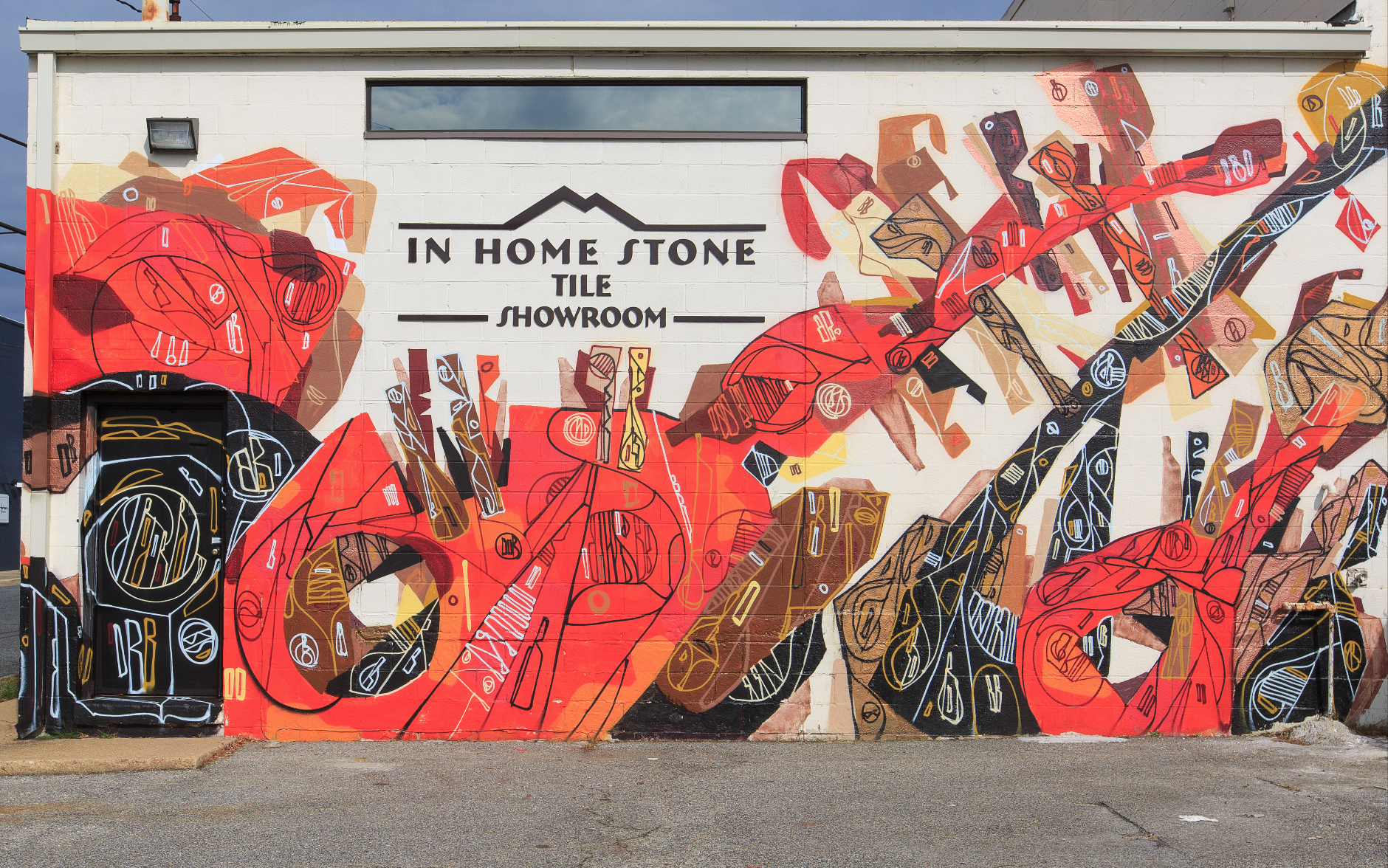 When you need a break from all of this thinking about, well, thinking, you can simply turn your eyes to the left and look at Gen Duarte’s whirling dervish of a painting. It is pure pleasure. Abstract, vividly colored and dancing across the wall, it recalls Milton Glazer’s iconic 1966 graphic image of Bob Dylan with a brilliant technicolor swirl of curls.

Both Arlin Graff and Ju Violetta explore nature in their work. Graff’s painting of a red fox resembles a collage, built on straight edged shapes with a limited palette. Like much of his work, this piece was first configured on a computer. When Graff was satisfied, he projected the image on the Edgewood Avenue wall and meticulously painted the final image. In sharp contrast to the fluidity of the other artists, he paints a majestic view of nature using a deconstructed image from the digital world.

Violetta’s piece reveals a woman, apparently looking out at a natural scene. She wears a blouse covered with colorful flora. Around her are simply sketched leaves, flowers, branches, and a bright red bird. A box floats in front of her eyes. It looks a bit like a pair of virtual reality goggles, but it’s a planter box sprouting flowers. Like much of the work here, the piece is dreamlike and surreal. 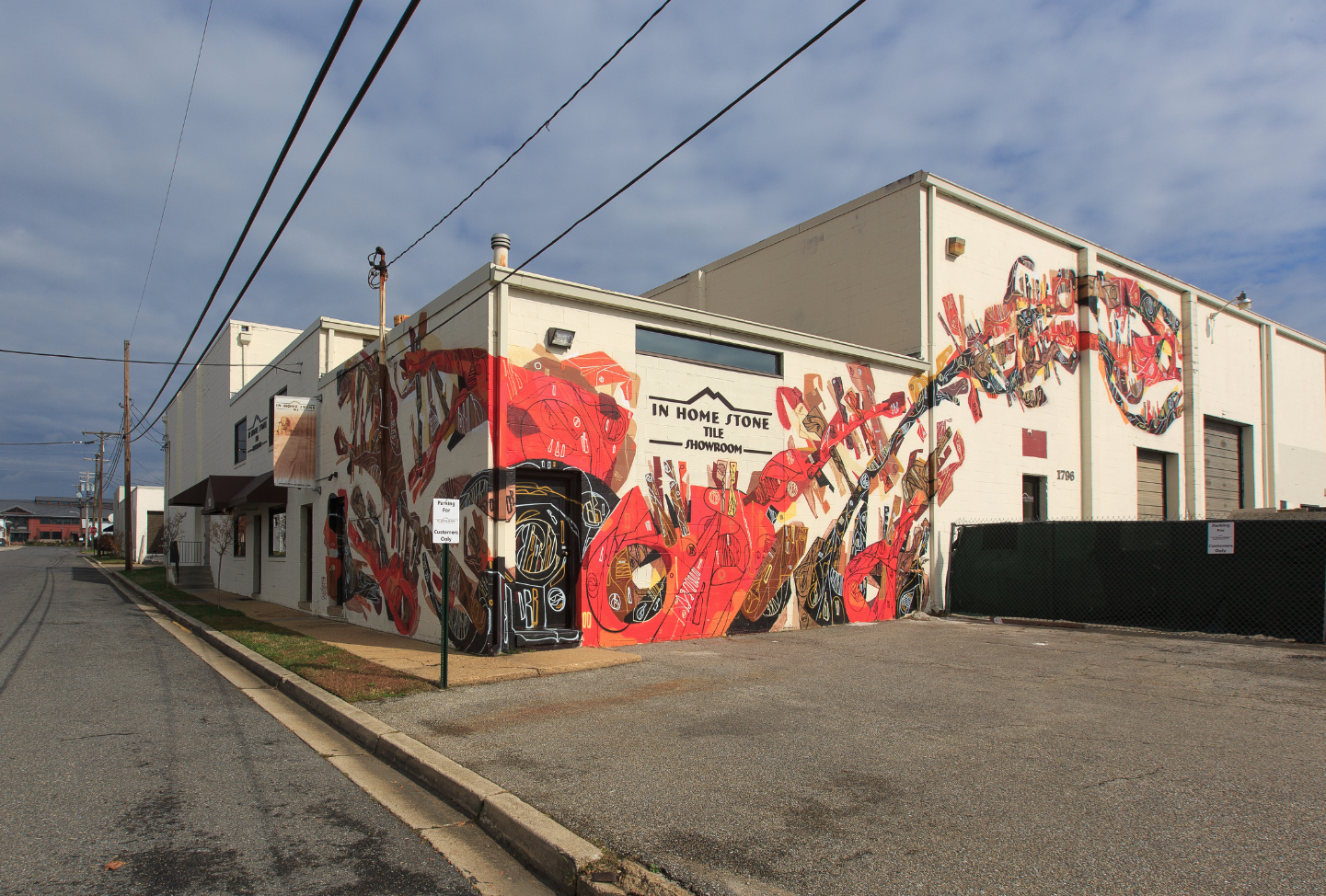 The last artist, Ciro Schu, painted the largest and most abstract mural here. Snaking its way around In Home Stone, its weaving imagery seems rooted in ancient civilization. Letters and words have always been part of graffiti, and at first glance you might think you are looking at words and letters embedded in this piece. But they aren’t. The imagery is simultaneously beautiful and frightening. You might see serpents or dragons but everything seems to come from some place buried deep within the subconscious. It’s just beyond our rational comprehension but not our emotions.

This isn’t the first street art to appear in Annapolis. Pardo’s passions have helped to fuel a wildfire of street art. In 2014, Pardo brought Branco, Vermelho, Duarte, Ribeiro, as well as TIKKA, also from São Paulo, to Annapolis where they teamed with local artists Jesse James, Charles Lawrance, and Jeff Huntington to paint a long wall at Park Place. This summer, Huntington’s fantastic mural “Agony and Ecstasy Live Together in Perfect Harmony” was painted on the front of Tsunami on West Street provoking an as yet unresolved contretemps about the relationship of art and historic preservation in the city.