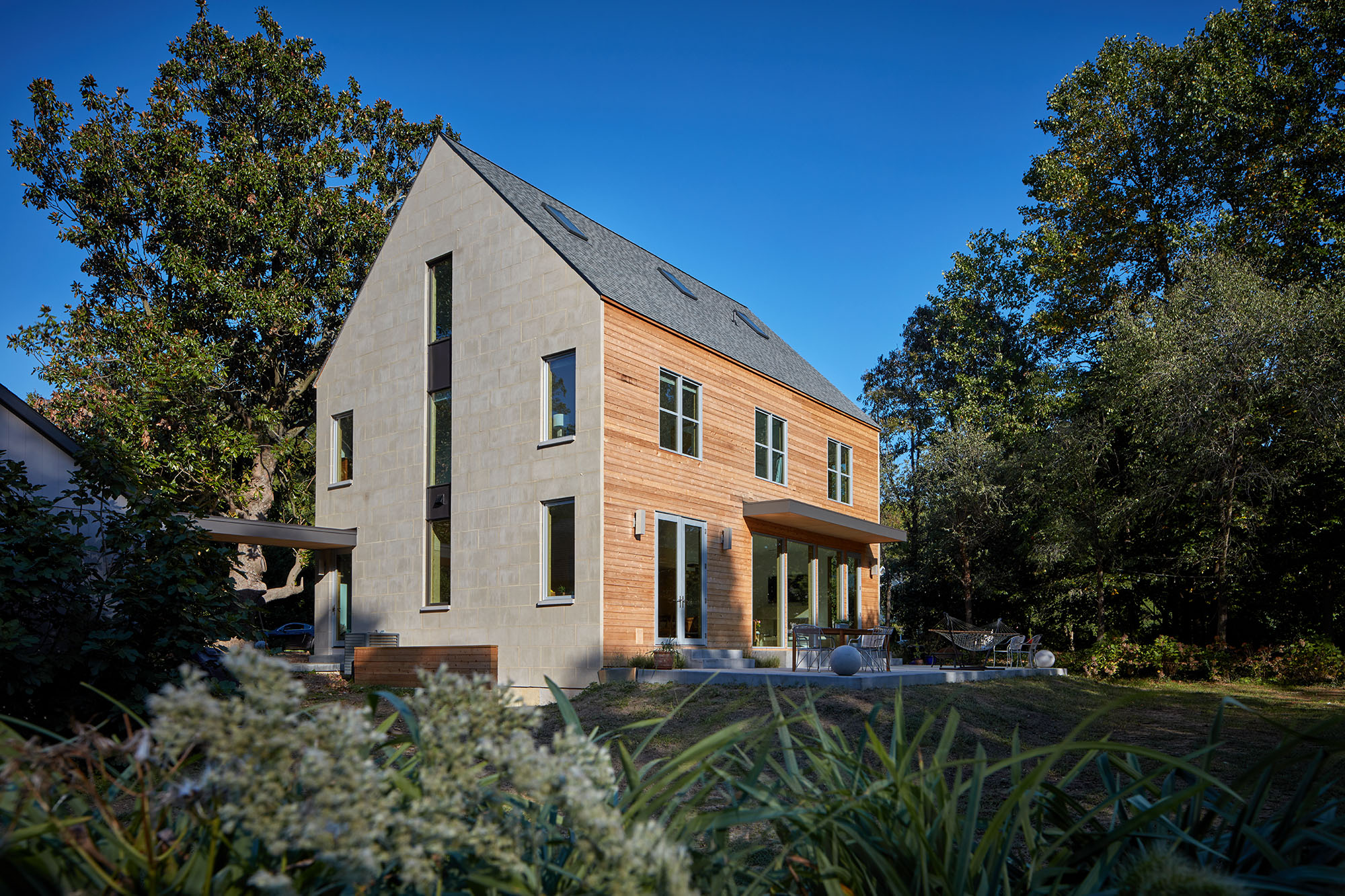 Imagine combining the vision of a seasoned architect, a loving relationship between mother and son, and their shared appreciation of the modern aesthetic. The result? A once-in-a-lifetime passion project to be cherished for years to come.

Wes Allbright grew up in an old shingle-style farmhouse on the grounds of a former nursery in Annapolis. Now, standing in the great room of his current modern farmhouse—so new you can catch the scent of fresh wood when you walk through the doors—he can still see his boyhood home through a stand of trees.

Although it happened a bit sooner than the recent college graduate expected, he says that building a home in the beloved neighborhood where he grew up wasn’t totally unforeseen. “I would always have asked you or Dad to help me with the design of a home,” Wes says to his mother, Marta Hansen, award-winning Annapolis architect of the 3,000-square-feet modern farmhouse they designed together.

Consistent with the modern farmhouse aesthetic, the three-bedroom, two-and-a-half bathroom, three-floor home with full basement features a spare interior, open floor plan, and generous floor-to-ceiling Windsor windows. The generous use of natural substances such as birch plywood and red oak, combined with loads of natural light, adds warmth to what might otherwise
feel austere.

The oversized windows make for easy gazing into the backyard, a meadow-like space that once housed a fruit orchard, part of the Bayberry Farm Nursery (c.1941).

The home is just minutes from downtown Annapolis. But its secluded and tranquil setting, framed by natural beauty, makes the modern farmhouse a fitting style for this dream home. Hansen explains why she chose the farmhouse as an initial model. The modern farmhouse is “characterized by simple gabled pavilions connected by flat-roofed galleries, clean lines, minimal detailing, and an open floorplan with big windows on all sides for maximum daylighting and indoor/outdoor spaces.” She adds that it is a relevant form for the Chesapeake Bay region because “We are a temperate climate, so we do not need deep overhangs; we can have lots of windows and incorporate indoor/outdoor spaces. We get torrential rainstorms, so flat roofs should be used sparingly. And since there is so much natural beauty here, the home can be oriented to the outdoors.”

The pandemic accelerated the project’s timeline. As the design plans were being drawn, Wes and his fiancé were living and working remotely in a cozy 900-square-foot studio on a parcel of the shared 1.5-acre property where his new house now sits. In the nineties, Marta had renovated the former office building, converting it to serve as her architect studio, complete with kitchenette, full bath, and bedroom.

In its prior iteration, the studio had served as the business hub of the Bayberry Farm Nursery. Marta recently began working again in the studio, from whose exposed ceiling beams hang remnants of its past: a working ladder and posters of the nursery’s flowering plants.

Wes doesn’t have to go far to revisit his former COVID work and living space. A gallery with runway lights, a birch ceiling, and concrete floor connects the studio to his new house. During construction, before the concrete was poured to create the cement floor, a ten-foot hole that he and Marta recall was a “muddy mess” served as a (temporary) reminder of the gargantuan project they undertook together.

Spending time with Marta and Wes, it’s clear that mother and son share a mutual respect and a similar cerebral approach to problem-solving. Wes is an information technology professional and self-professed “tinkerer” whose calm demeanor pairs well with the high energy of his mother, who has designed literally hundreds of homes in the Annapolis area and has received numerous awards from the American Institute of Architects and other esteemed professional organizations. Together, they designed a home that manages to feel both spare and modern, yet embracingly warm. Throughout the process, no detail was left to chance, and no task was too menial for either of them to perform.

Marta recounts the many weekends they spent laboring together, like the one when they mixed cement and white clay sand in a wheelbarrow in the living room and then poured it to create the cast concrete gas fireplace and the bench that extends directly from it. It’s now a focal point of the room that’s both understated and eye-catching.

The oak monorail stairway is another outstanding feature executed with multiple resources, including sweat equity. The stair treads originated from a new sawmill in South County, Segelhorst Woodworking and Sawmill. One of Marta’s long-term clients started it during Covid as a “pandemic project.” Fastidiously, Marta and Wes stained the red oak treads (cut from a tree that was recently chopped down at the mill), set them in place, drilled into the beams, and sunk all the bolts for the two flights of stairs. Floor-to-ceiling glass wall panels are set flush against the stairs, which almost appear to float in space.

The house contains elements of modernism—from its clean lines and no-fuss interior to the abstracted concrete boxwood orbs on the deck—with a palpable warmth. That’s intentional, explains Marta, who says she designed the house around where the sun is in the later afternoon and early evening, so home occupants can take advantage of the late-day sun streaming through the generous windows. At night, lights built into the deck shine upward, bathing the back of the house in a soft glow that Marta can see from her house, just beyond Wes’s yard.

It’s a daily reminder of the special project the two created together, not that either needs reminding. “It was the most meaningful event in my life,” Marta says. “It’s a dream come true knowing that Wes will probably be here for a long time.”