On Buckingham Cove | A Deck Wide Enough for Joy 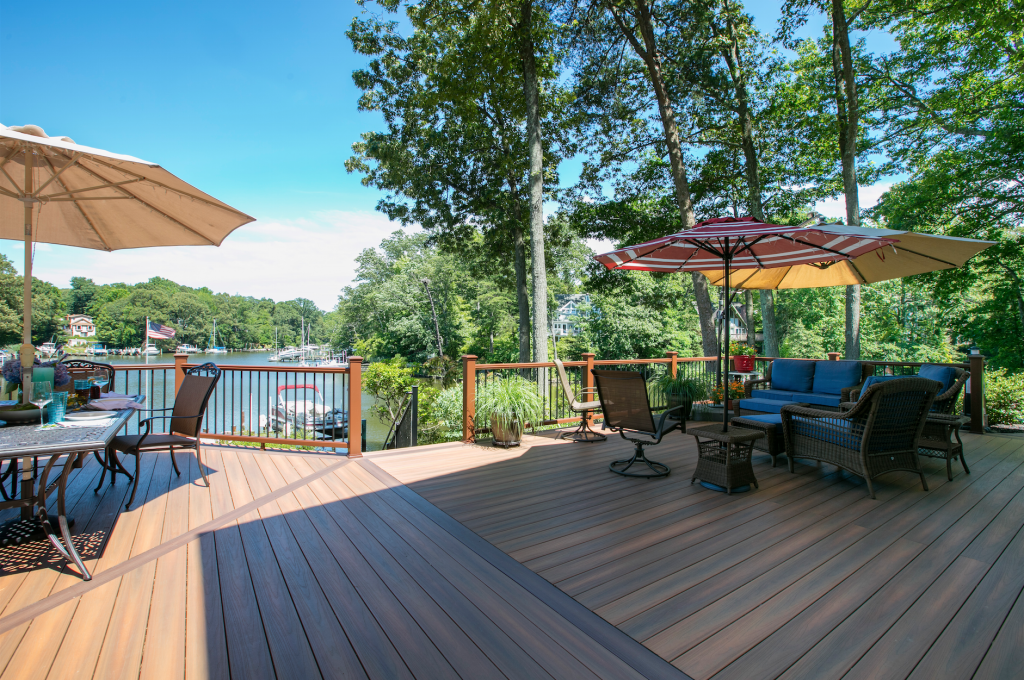 Dividing Creek on the Magothy River narrows to an enchanting estuary called Buckingham Cove. And here is where Carol and Peter Sowa live, hidden away with just a few neighbors.  Every home with a view such as theirs needs a proper deck to enjoy it. So, in 2015, Carol and Peter were ready to upgrade their rickety deck and steps to the dock. They had lived in their home for 23 years. Peter, now retired, was a Brewmaster with G. Heileman/Natty Boh Brewery in Baltimore. Carol taught business classes at Severna Park High School for many years. With three young grandchildren, they wanted a deck that was an extension of their home and their hearts. “We wanted a space that would support a small children’s pool,” notes Peter, “and with enough room for our grandchildren to ride their little bikes.” “We wanted a place for family, to enjoy a meal, cook, talk, and laugh, a place for joy,” adds Carol.

After interviewing several companies, they chose Diamond Decks & Home Improvement for the job. “Theirs was more expensive than some of the others we interviewed but they were offering a Cadillac version, you knew it was a go, it was going to be good . . . it was a gut feel,” says Peter.

Diamond Decks owner William “Bill” Zinnert assessed the job and found a Cadillac-sized problem. “The deck was buckling, footers had sunk, and there was a concrete pad jammed up against the house. We ended up tearing it all out and rebuilding what they had.”

Based in the Annapolis area and in business for 23 years, Zinnert laid the boards diagonally to define the deck’s dining area. “I created a diamond design, which subtly distinguishes one area from the other,” he says. In the sitting area, the boards form a different pattern, further distinguishing each gathering space.

His team replaced the steps and railing that lined the steep slope to the dock. “They were really goofy. Part of a frame was nailed to a tree,” recalls Zinnert. He built the new steps into the hillside so they did not float above it and look unnatural. For a special touch, Zinnert framed each step with dark boards creating a “picture frame.” This design detail helps call attention to each step’s natural beauty and also helps make it visible, preventing accidents, he notes. LED lighting was also installed on the stairs for safety and ambience.

It is mid July. A blue heron fishes in a nearby marsh and an osprey raises its young twenty yards away. “Everyday, it is like a science lesson,” says Carol. Along with the fledglings, the couple looks forward to watching their grandchildren grow and frolic on a deck of many dimensions, large enough
for joy.

Kymberly Taylor, editor-in-chief of Annapolis Home, has a BA in Journalism from Boston University and an MFA in Creative Writing from Columbia University.