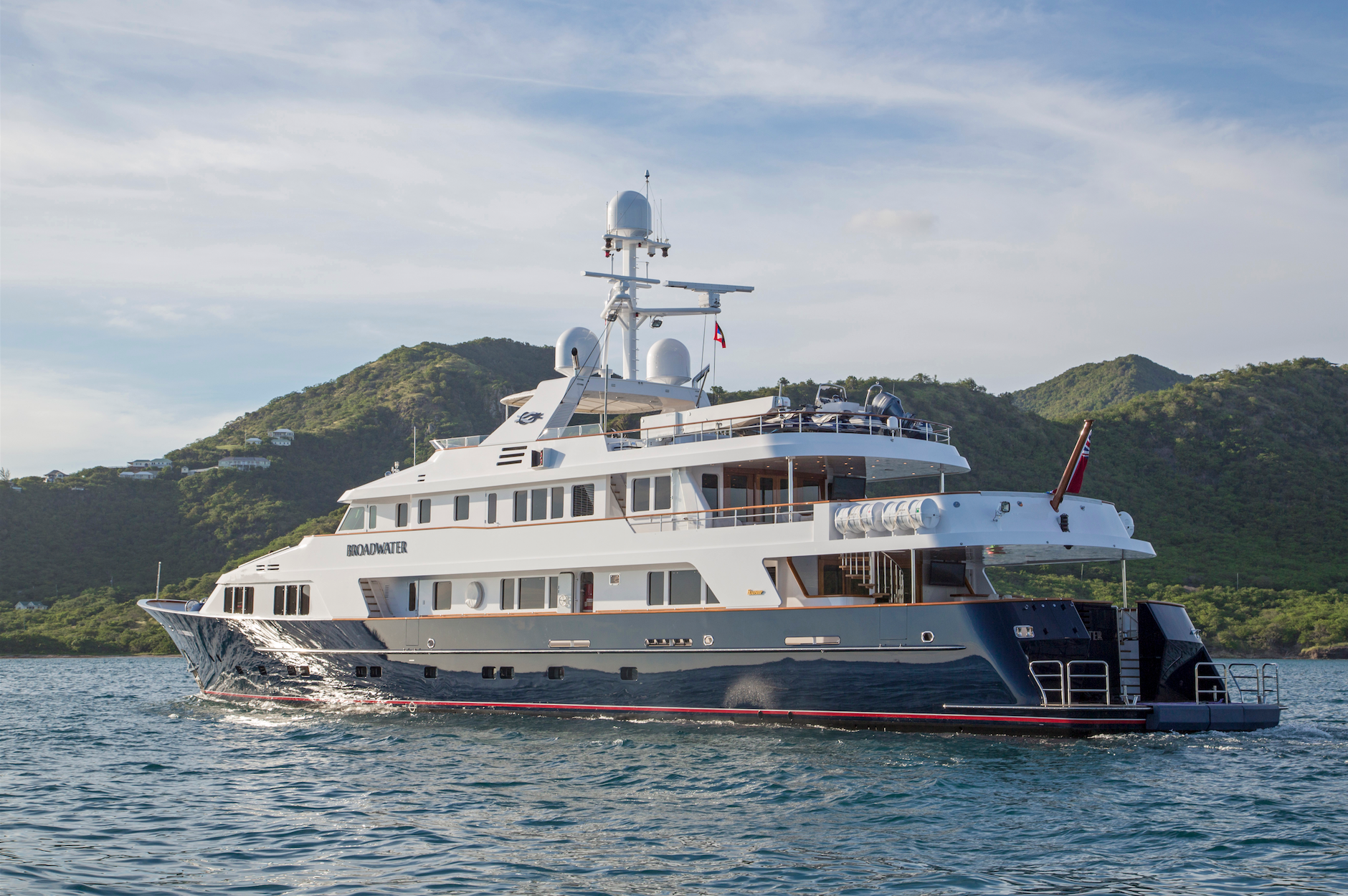 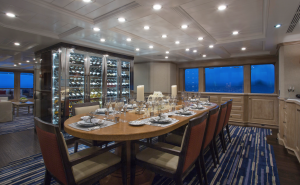 When life flies out of control and then accelerates, some of us panic. Others drink heavily. And there are those who, at the moment of acceleration, withdraw just enough to remain balanced and solve the problem.

Matthew Voorhees is of the latter ilk. A technology Internet entrepreneur living in Washington, D.C., he possesses great inner calm and a great outer force: A Feadship 165 named Broadwater. The Netherlands-based Feadship Royal Dutch Shipyards, which dates back to 1887, is famed for its finely engineered super-yachts custom designed for creative folks such as Steve Jobs, Malcolm Forbes, and Henry Ford. 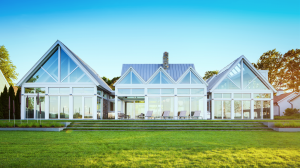 Built in 1990, Broadwater can accommodate approximately seven crew and eight to ten guests. Voorhees wanted to update its twenty-five-year-old interior substantially to insure that it is in the finest condition for cruising the pristine waters of the Exumas, the British Virgin Islands, and exotic locales such as Monaco.  When Voorhees is not using Broadwater, it is available for charter.

Conveniently, Voorhees recently built a glass-faced modern European home facing the Magothy River. He also named this home Broadwater. He turned to its architect, Scarlett Breeding, of Alt Breeding Schwarz, for help refitting the floating Broadwater’s main salon. Breeding had conceived all of the considerable casework in his new home so the move
made sense. 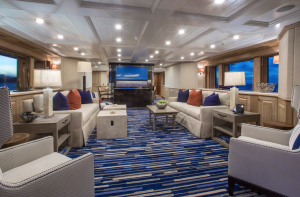 “It’s a passion project. The boat has an older formal structure, but we wanted to create a transparency inside and outside, like people live today. It was like Grandma’s living room, and we wanted to transform this into a Steve Jobs-like club venue, more like a Hampton’s gentleman’s club,” explains Voorhees. 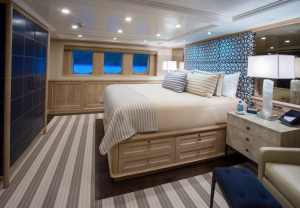 Breeding removed the wall and in its place invented a kind of multifunctional “sea-chest.” This had to do many things: define and divide space, safely showcase a fine wine collection, refrigerate, house multimedia, and provide storage for silver and linens. What’s more, Voorhees wanted sparkle and high-design at the same level of perfection as the casework in his home.

“The interior was very traditional. We knew it was headed to a much more current look . . . . Our piece is a departure, a little piece of sculpture that divides the dining room from the main salon. It is the centerpiece between the two,” says Breeding. 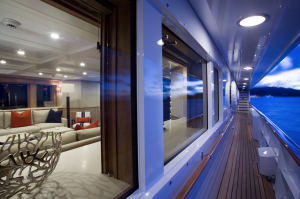 Indeed, it is. Facing the dining area is the glass and stainless steel sea chest displaying 250 bottles of fine wine. On its opposite side, facing the living room, a flat screen TV is encased within polished stainless steel and quartered eucalyptus. 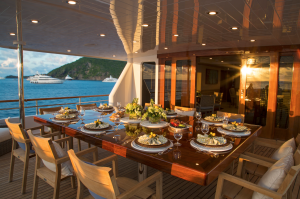 Breeding pays homage to nautical tradition yet subverts it. The yacht’s brilliant sheen recalls the old-world method of hand-applying layers of protective oils to protect the wood from the elements. The surrounding surface is covered in an antique mirror laced with a wire mesh in a diamond pattern, materials that ingeniously summon nautical mythologies: Leviathan-like fishing nets, constellations to navigate ocean journeys, diamond treasures.

In fact, recalls Breeding, they debated about materials and whether to use stainless steel, which shows smudges and fingerprints. “That is not a problem. Our crew wears white gloves,” said Voorhees, whose team often adheres to formal yachting protocol. “That made it all right. We chose mirrored stainless, so the piece would feel light. It’s is a wonderful item of pleasure,” Breeding says. 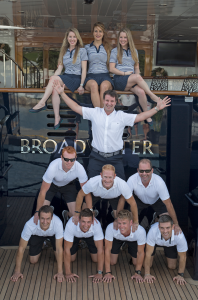 This “item of pleasure” took months of hard work. Conceiving the casework entailed a flight down to Palm Beach with the president of Premier Cabinetry who studied Broadwater’s precise requirements. They had to engineer a refrigeration system and design the chest in components, so it could be disassembled, carried onto a boat, and then completely put together.

Yet one would not know of this complication, nor of others—the many calculations to account for camber and tilt, worries about the sheen level of eucalyptus, how to respect form while introducing change.

A balance has been achieved inside Broadwater. Tensions between time periods, space, materials, and personal style are resolved. And amidst the discipline of precision, polish, and shine, a primal optimism rises. The very spirit of water, of adventure, pervades both Broadwaters. Home and ship co-exist in Voorhees’s world, like two separate equations, the products of beautiful thinking. 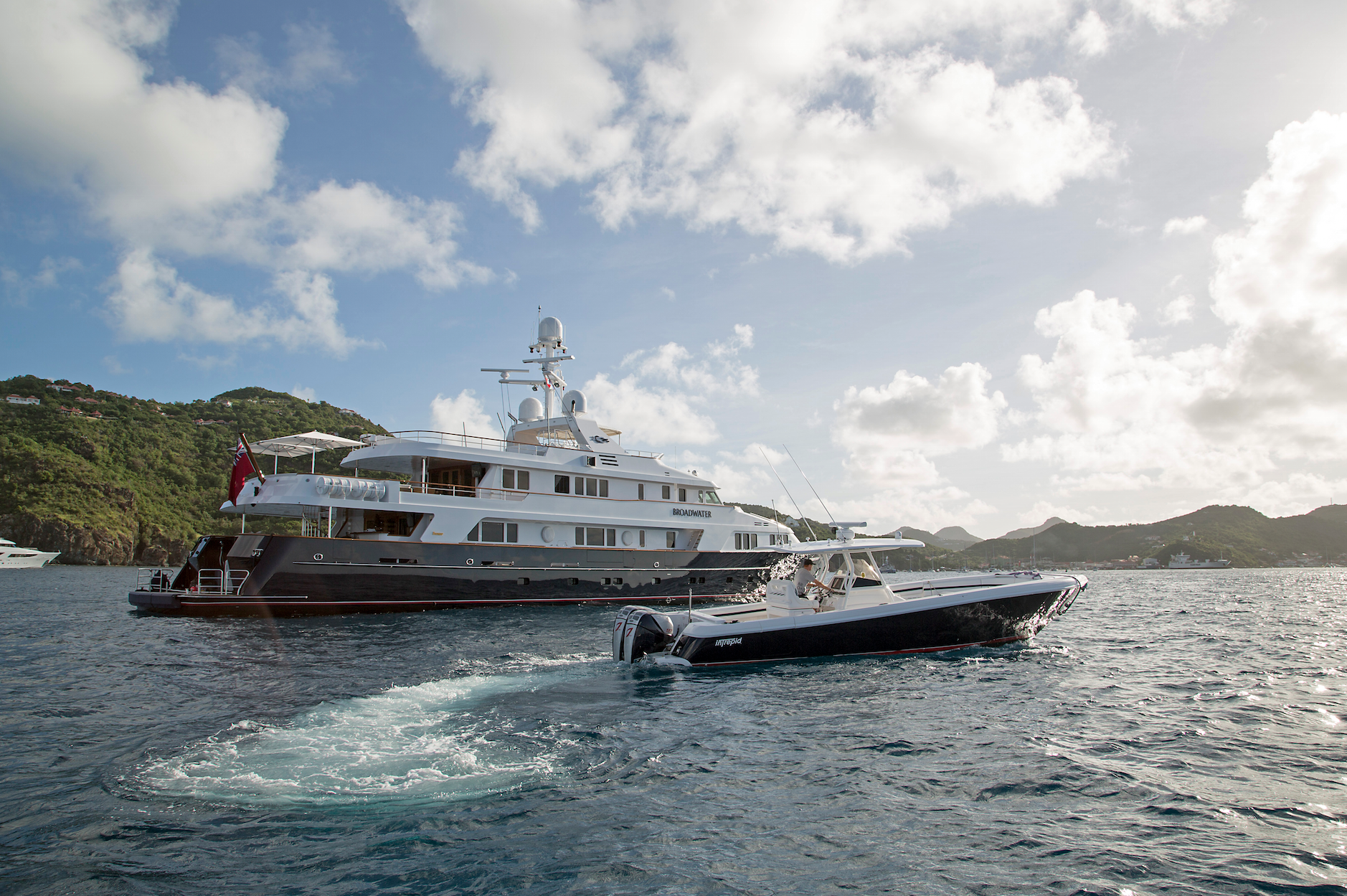 Kymberly Taylor, editor-in-chief of Annapolis Home,
has a BA in Journalism from Boston University and an
MFA in Creative Writing from Columbia University.