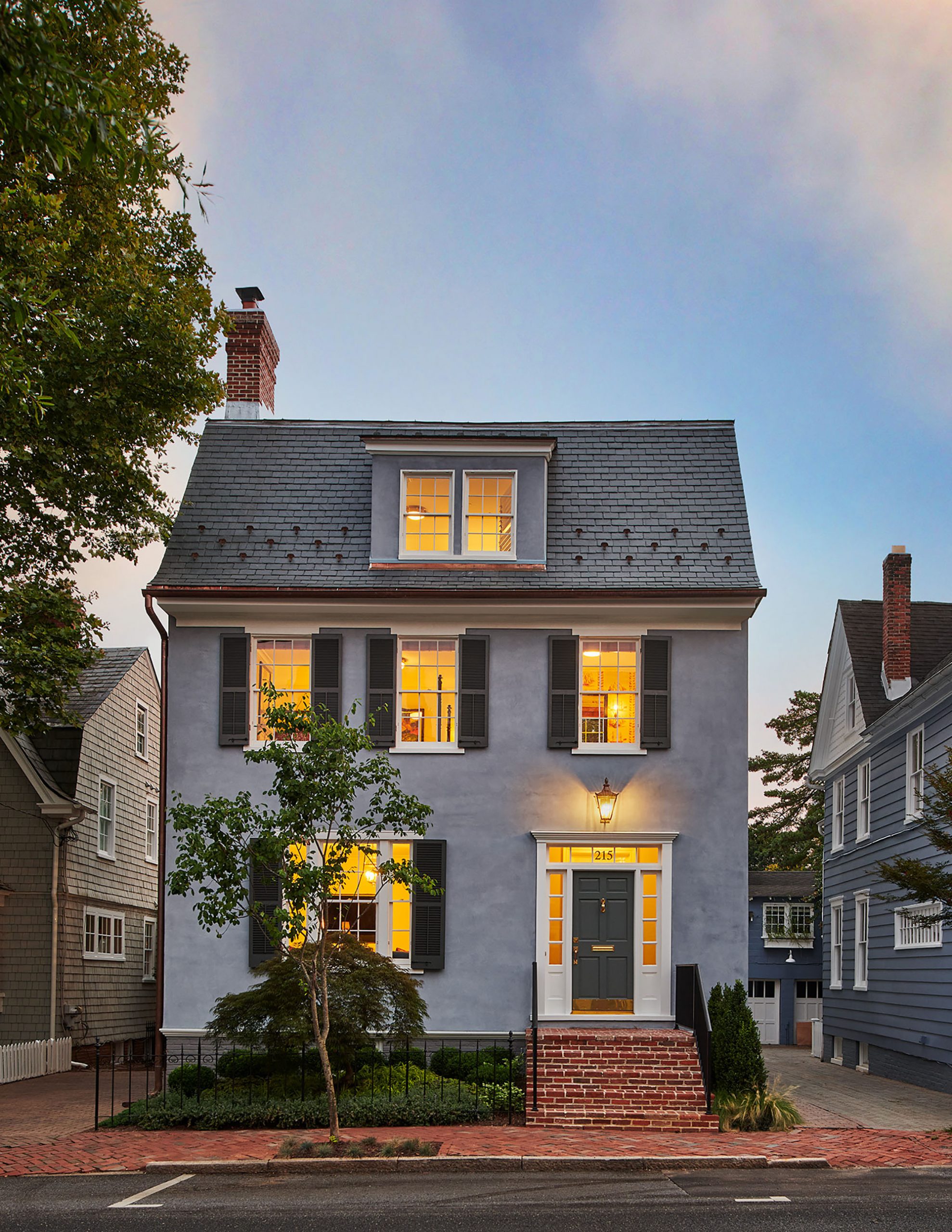 Architecture is one way we experience time, as when we encounter a building that is a hundred or five hundred years old. In the same way, architecture plays a role in our understanding of history. It can also give us a sense of place, as we relate to a specific locale not only through its landscape but also through its streets and buildings.

This is why we took notice when a blue stucco home from 1905 at 215 King George Street in Annapolis was renovated. This three-story house, once painted pink, is a private residence on a very public street. Horses pulling carriages once trotted down this street. Flanked by other 18th to early 20th century houses, the homes on King George give meaning to one another and define the street as “historical”.

The residence is one of six properties subdivided in 1901 from land associated with the older William Paca and Hammond-Harwood Houses. Compared to these nearby grand estates, the house is modest in scale. Even so, the smaller homes, tightly compressed next to each other, play an important role in our experience of historic Annapolis.

The home was built by Anne Jeffers, the first female State Librarian of Maryland, who was also the daughter of Commander Nicholson Jeffers, III, a member of the first graduating class of the Naval Academy in 1846. The current homeowner, Paul Prager, first admired this home when he was a midshipman. A graduate of the US Naval Academy, and father to a son who is currently a student there, Prager also serves on the Academy’s Foundation Board of Directors. So, the home’s unofficial connection to the USNA runs deep.

Over the decades, the home has accumulated an aura of history, gaining in significance and reinforced by the neighborhood’s designation as a National Historic Landmark District in 1965. The home’s beginning was less grand, however. Jeffers originally built the home as a boarding house. It served that purpose for many years before becoming a single-family home.

A decade or so after it was first built, the home was modified into a Dutch Colonial style, notable for its gambrel roof with flared eaves and sheathed with slate shingles. Originally two and a half stories, the home was then raised to three.

From the sidewalk, you are sure to notice the charming front door entry. The red brick steps and black wrought-iron railings lead to a dark gray wooden door. It is framed by sidelights and horizontal window panes above the door with a five-part arrangement of transom lights. On the façade, the four windows with dark louvered shutters, some original to the home, add texture and a layered dimension to the exterior.

Over the years, the home suffered deterioration due to weather and the passage of time. The flooring was out of level by at least three inches, and the interior stairs were leaning and sagging.

When the current homeowner acquired the property in 2017 with a desire to repair and restore the home, he turned to architect Greg Wiedemann and custom builder Mike Campbell and his team at Winchester Construction. Winchester has extensive experience with historic remodels, and for Campbell, the reward is turning a rundown home into a modern one while preserving its historic fabric. Taking a “strict restorative approach,” Wiedemann explains, “The goal of the project was to restore the original residence and to replace the Southwest rear addition with an addition of similar size that was sympathetic to the original architecture.”

In any restoration, a question always looms around which repairs and upgrades can be made without jeopardizing its designation as a historic home. Sensitive to the home’s historical character, Wiedemann worked closely with the Historic Preservation Office and was guided by the principles of the Department of Interior. Local boards of historic neighborhoods often refer to these guidelines to preserve the historical character of an area.

Wiedemann and Winchester’s seamless collaboration is evident when you approach the home with its completely refurbished exterior, including a new Buckingham slate roof, repaired and upgraded windows, and trim. As soon as you open the front door, you step onto gleaming new white oak floors in the expansive hall, filled with natural light. A highlight of the renovation is Winchester’s exquisitely crafted three-floor, cantilevered stairway with a mahogany handrail. A medallion with the Naval Academy insignia is embedded in the cap on the first-floor banister.

Each of the rooms has a refined look, with immaculate attention to trim, moldings, and every other detail, giving the home the look of a freshly polished jewel. The interior designer, Shaun Jackson, chose furnishings, rugs, lighting, and pictures that all complement the home’s stately ambiance and give each room warmth, color, and vibrancy. With access to Prager’s vast collection of original posters—ranging from military recruitment and propaganda to fashion, opera, and travel—Jackson made selections to display on walls throughout the home.

The restoration team totally transformed the rear Southwest room, which houses the kitchen and breakfast room. Commenting on the single-story wing that was added across the entire back in the 1950s as a shed with a sloping roof, the architect said that it “was not in the character of the original house.”  Wiedemann designed the replacement addition to create the illusion of a sun porch, an element that was common in the early 1900s.

The rear exterior and interior now have an updated, elegant look, complete with a coherent window design that floods the room with light. The kitchen’s navy-blue cabinetry and antique lighting fixtures offer another nod to the Naval Academy. French doors open onto a brick staircase, curved for dramatic effect, and lead to a brick patio and the cloistered rear garden, which has also undergone a makeover. And the roof now hosts a balcony that opens into a second-floor family room.

An exceptional historic restoration, the Prager home sets a high standard that similar projects should strive to achieve. That is, to respect the home’s original character while undertaking carefully chosen upgrades that make the home livable for today and meaningful for the future. Such a project is both historical and contemporary, preserving the past while, perhaps ironically, bringing it into the present. This is a home for which the homeowner possessed the resources and vision to invest in its preservation and an architect and construction team attuned to the nuances of restoration. As a result, the Prager residence advances its role in the narrative of historic Annapolis while adding refined beauty to King George Street.