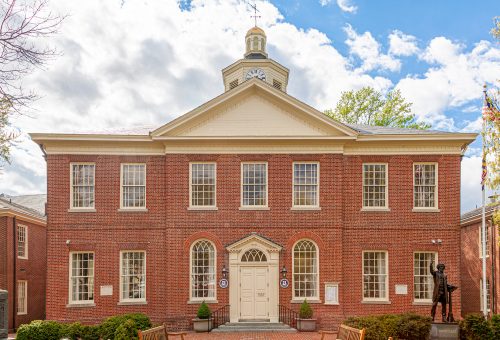 Historic Courthouse of 1794 is among the oldest landmarks in town of Easton. Statue of the reformist abolitionist African American leader Frederick Douglass, in front of the Talbot County Courthouse, Easton, where he was once kept as a prisoner.

Easton’s origins go back more than 300 years, when, in 1710, it was established as a site for the Talbot County courthouse, then a part of the British colony known as the Province of Maryland. As taverns and shops built up around the courthouse, the area became a village—and in this way, Easton has always been a destination for travelers.

These days, more and more people are starting to realize how special Easton is. With so much attention fixed on the deservedly well-loved town of St. Michael’s only a few miles to the west, Easton is often overlooked. Nevertheless, it has gained a reputation for itself as a center for arts and culture.

Boasting a population of only 16,000, you might be fooled into thinking of Easton as a small, rural community located on Maryland’s Eastern Shore, tucked inland from the Chesapeake Bay. And while Easton does hold close to its history and its rural heritage, the official seat of Talbot County is so much more: it’s a place where history, entertainment, cuisine, and architecture converge to create a unique culture of its own.

One could argue that Easton has steadily gained its reputation as a go-to place over the 70 years since the Chesapeake Bay Bridge first opened, offering easy access to those from the Western Shore: not only Annapolitans but Baltimoreans and Washingtonians as well.

But even the Easton of a decade ago is not the same as the Easton of today. Its viability as a tourist attraction has grown thanks to a booming business scene, much of which has been driven in no small part by Bluepoint Hospitality Group, an umbrella company for several restaurants and retailers throughout the greater Easton area.

Some visitors prefer Easton for its dining options, while others love the many museums and entertainment venues. In fact, with more than a dozen art galleries, boutique shops, studio spaces, and organizations like the Mid-Shore Maryland Chapter of the American Guild of Organists and the Talbot Historical Society, Easton prides itself on being the cultural capital of the Eastern Shore.

It’s also a place for the curious-minded to immerse themselves in history. The hometown of abolitionists Frederick Douglass and Harriet Tubman, Easton is also the location of a neighborhood known as The Hill. Established by freed slaves in the late 18th century just within the southern and eastern border of the downtown area, The Hill is possibly one of the oldest Black communities in the country.

Easton’s notable ties to the Quaker community can be seen most evidently in its historic meeting house at 405 South Washington Street, a well-preserved example of colonial architecture still in use for worship today.

Walk through Easton, and you’ll feel instantly at ease. From bookstores to flower shops, it’s nearly impossible not to be charmed by the small businesses lining the streets. Here and there, you’ll see a real estate office or a museum. Pedestrians and bicyclists meander by. You’re equally likely to pass well-dressed business professionals conducting a walking meeting as you are to see an artist painting en plein air (that is, in the open air) at an easel on the street corner.

In short, there’s a reason Easton is often hailed by so many as a don’t-miss destination for anyone from across the country who loves exploring small towns.

A Day in Easton 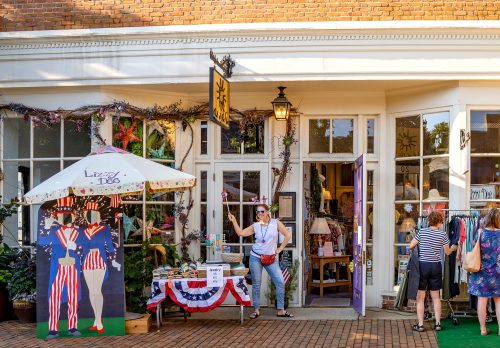 Start your visit to Easton by properly caffeinating with a coffee or tea from Weather Gage (weathergagecoffee.com), where fragrant La Colombe coffee is served alongside fine teas and freshly-made baked goods in a maritime-themed atmosphere. Later, for lunch, you can choose between the fresh, healthy options at Sunflowers & Greens (sunflowersandgreens.com) or sink your teeth into the Italian deliciousness of Roman-style pizza at Roma Alla Pala (romaeaston.com).

While you are walking around, be sure to stop in at some of the locally-owned retailers, such as the independent bookshop Flying Cloud Booksellers (flyingcloudbooks.com) or Benjamin, the fine crystal, porcelain, and silver store (benjamineaston.com). If you get a sweet tooth at some point, be sure to satisfy it with a selection from Bonheur Pie & Ice Cream (bonheureaston.com).

If you’re looking for a relaxed but still upscale dinner, consider having drinks and small plates at the intimate bar/lounge, The Stewart (thestewart.com), or try an upscale European-style meal at Bas Rouge (basrouge.com).

For entertainment, you can’t go wrong with the choice of live music at the historic Avalon Theatre (avalontheatre.com) or by visiting the latest display at the Academy Art Museum (academyartmuseum.com). The Eastern Shore is big duck and goose hunting country, so, if you are a hunter, stop by Albright’s Gun Shop (albrightsgunshop.com).

And don’t worry—if you’re especially tired after your day of Easton adventures (or if you can’t do it all in one day and want to make a weekend out of it), you can make a reservation at the historic Tidewater Inn (tidewaterinn.com), which combines traditional décor with modern amenities for a comfortable stay while maintaining the town’s
renowned charm.