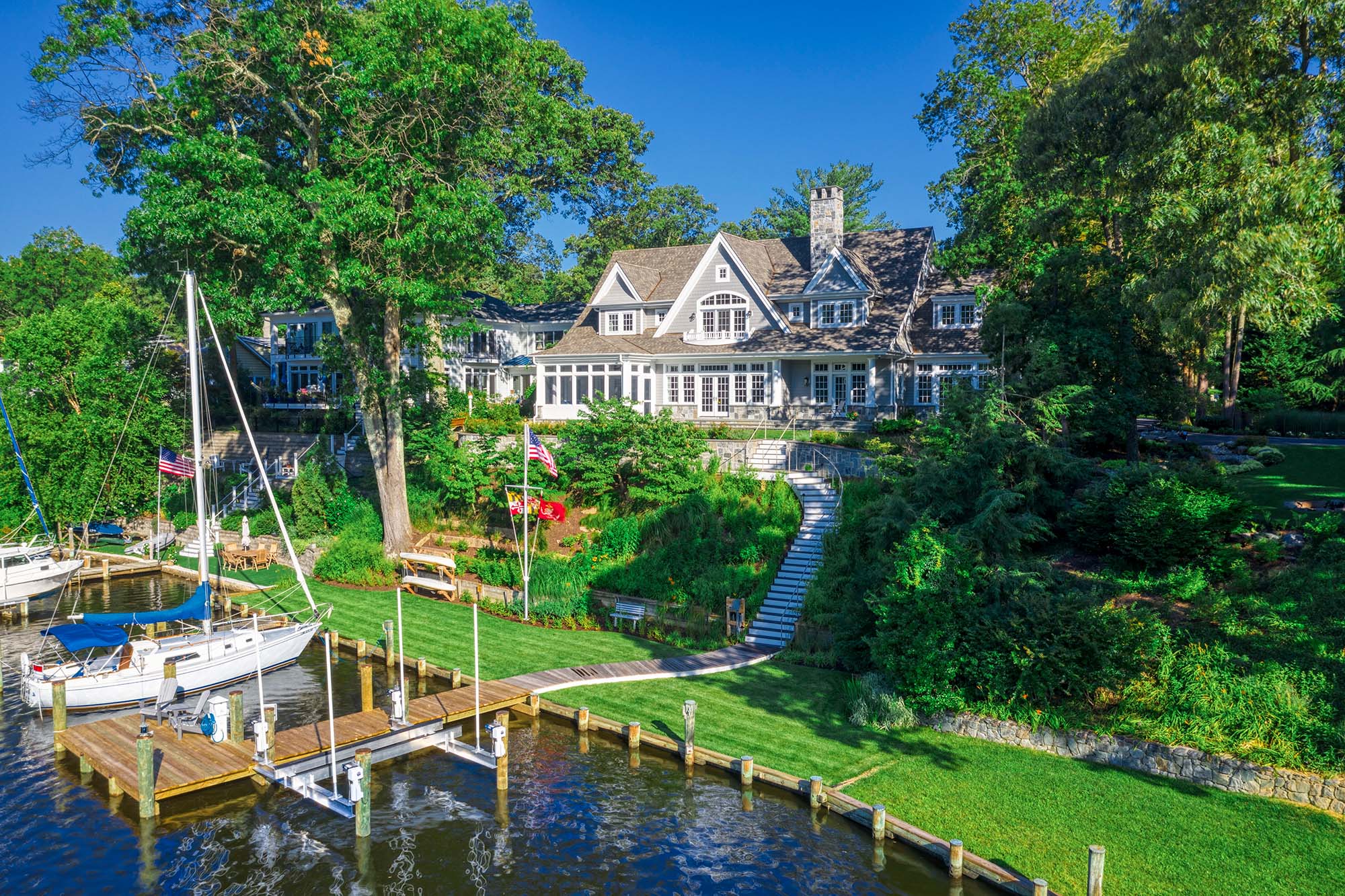 The classical Shingle Style home, which emerged in New England between 1880 and 1900, was designed for seaside resorts, with hurricanes and bad weather in mind. At times asymmetrical, its horizontal structure seems to hug the ground.

Today, Hammond Wilson gives the Shingle Style a fresh interpretation—one that architect Sandie Martino loosely calls “Chesapeake Shingle Style.” As this home on Dividing Creek reveals, this style has a Chesapeake naturalism, an informal feel, with a mix of materials, generous screened porches, verandas, and wooden stairs leading to a dock with a boat or two. It may even be “a home you can talk to,” says interior designer Gina Fitzsimmons of Fitzsimmons Design Associates.

As philosopher Gaston Bachelard explains, a home, once inhabited, may transcend geometrical space and is more alive than one thinks. Fitzsimmons seems to know this instinctively. “I often talk to my homes. When I go to my grandmother’s home in Massachusetts, I say, ‘Hi, little house, I’m back.’ There’s no place I would rather be. This is a house like that; you can talk to it.”

With its terraced slope and waist-high perennials, this home has a settled feel, which is no accident. At the beginning of the project around 2017, the homeowner hired Hammond Wilson, Fitzsimmons, McHale Landscape Design, and builder Gary Smith. In fact, says the homeowner, for the best outcome, hire an architect, landscape designer, interior designer, and builder before your project begins and make sure they communicate with each other. “You want them to all get along. And, if you don’t do this, you may be in trouble. You may have to mediate.”

The team worked together to create a new home that, tucked into rows of cedars, oak trees, and regal magnolia, seems to have always been there.

McHale Landscape designer Grace Schneider explains that one giant magnolia in particular was too close to the new garage, so it would have to be cut down or moved—an ambitious and risky endeavor. Schneider’s team accepted the challenge, digging out its oversized rootball by hand and wrapping it with burlap and twine. “They used the two skid loaders that worked as if they were dancing together to move the magnolia to its final destination,” she says. “It was watered and fertilized and checked daily and now is flowering in its new location.”

Thanks to a master landscape plan executed five years before construction, the outside of this estate exudes stability. The interior captures the owners’ joie de vivre as well as unmapped recesses, the nonverbal elements that make us who we are. “I don’t know how Gina does it,” says the wife, resting her hand on the natural limestone fireplace in the living room. “She knew I loved pearls. Traditionally, I wear only pearls. The backsplash in the kitchen has an oyster pearl finish. And so does the tile in the master bath. And there is this, the fireplace. She ties things to my pearls, and this touches my heart. Things like this make this home mine.”

Fitzsimmons embedded select personal items and mementos throughout the home—things that have meaning to the couple, such as an antique clock from the husband’s family farm in Silver Run, Maryland, and hand-painted pottery from the couple’s travels to Italy. They had worked with Fitzsimmons on earlier projects, so they could express their desires freely.

So, Fitzsimmons designed the interior using old and new furnishings “with touches of Italian style and a mixing of materials.” Also, working closely with Martino, she handled much of the interior architectural detailing. In particular, she designed the recessed X-beam pattern in the entry, the stair railing, and various ceiling patterns, including the octagon and lighting fixture in the round dining room and master bath.

In the living room is a custom limestone fireplace, flanked by built-ins, with European wire mesh inserts in the door panels. Fitzsimmons placed two demilune tables with mirrors on opposite sides of the window wall. The demilune, shaped like a half-moon, was wildly popular in France during the 1700s and ideal for drawing rooms and tight spaces. However, Fitzsimmons chose them for their élan and elegant form: twin mirrors summon lost light, rays that have strayed from the river into the room. “They reflect light and the view, almost like adding a couple of windows. The symmetry makes it calming.”

Mirrors, the demilunes, the limestone hearth, and the striking window wall add a visual eloquence, “a glamour,” says Fitzsimmons. “But it’s the right kind. They didn’t want anything grand, just a feeling of ‘I am glad to be home.’ ”

Like Fitzsimmons, architect Sandie Martino tuned in to the homeowners’ lifestyle. Her design pays homage to the Shingle Style yet departs from traditional expectations to deliver a more personal architecture, forms that express the heart—a round dining room, a wine cellar with a spiral stair, a library with a fireplace, and a three-car garage with heated flooring. In the “not too big” living room, the couple can sit together for long hours watching the geese fly in for the evening, as the light fades from the creek.

The homeowner dreamed of a round dining room table for many years, so when Fitzsimmons discovered a rare Sarreid Jupe table, they both were elated. “I always wanted one! For work, we had to go to so many banquets where if you sat on the end, you felt left out. Or, if you sat at the head, you became the kingpin. Here, everyone can have a conversation,” she says. The round room is centered by a low-hanging lighting fixture, with no water views to distract. “This is a good thing,” says Martino, who designed the round room to accommodate the table and an alcove for an heirloom buffet. “People can really focus on each other.”

In the floor plan, Martino points out how the dining room and wine cellar complement one another: two round forms look like gears inside a golden clock. There is innate precision to this round room—a timelessness to walls that protectively embrace its guests. This architecture facilitates the flow of life, with spaces that encourage interaction and relationships. “A guest can head downstairs and pick out a bottle of wine for dinner,” says Martino.

Upstairs, there are no indifferent spaces, a condition hard to come by once you reach a second floor and need to furnish a master and en-suite guest rooms. A story is told by Italian pottery tucked in here and there and heirloom photos. A refinished vanity belonging to the wife’s grandmother was lovingly placed in an upstairs guest room. The master suite is especially striking. The soaking tub centers a serene alcove framed by drapery panels and overhead beams designed by Fitzsimmons. The space encourages contemplation, as does the walk-out balcony with views up and down the creek.

Though they have not yet unpacked every box, this house has already become a home, perhaps because it existed for many years in their imaginations. Married for over 30 years, the couple met at work in the Washington, D.C. area. Their first date was on Christmas Eve. Now, just in time for the New Year, they can celebrate in the library with their Boston Terrier named Violet asleep in front of the fire.

Many architectural styles dot the banks of the Magothy River, including houses made almost entirely of glass. The Shingle Style works well on Dividing Creek. With pitched roofs, low-hanging eaves, and sturdy walls, the home is a true shelter. With historical roots, it is modern in its versatility. The safety it engenders encourages doors to open, barriers to dissolve, neighbors to visit. It seems as if the architecture, the home itself, has become a third person, someone Fitzsimmons would approve of: a dear friend.