Spy House with a View 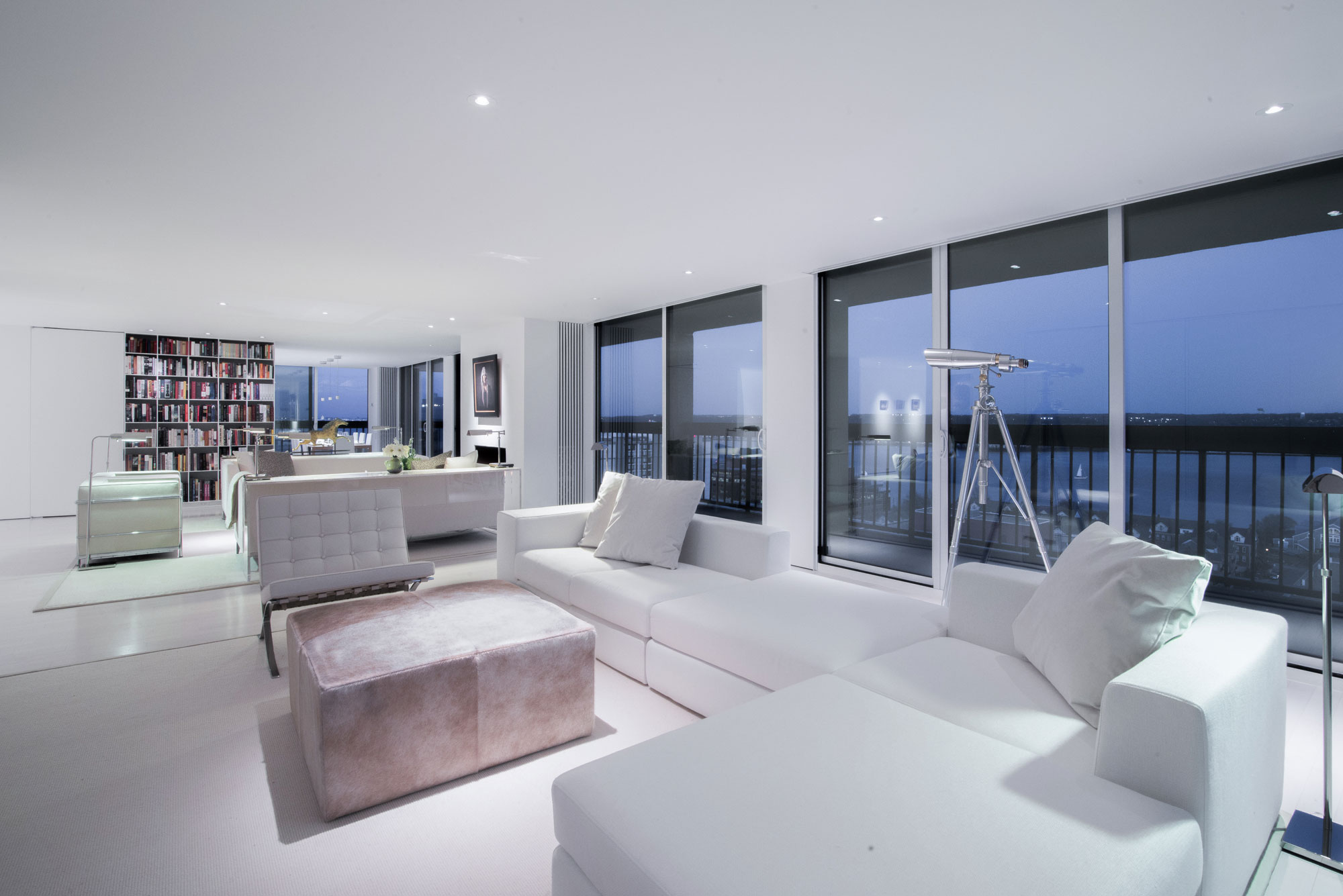 Professionals involved in the ‘spy business’ are not often associated with bright, sun-lit spaces. So it’s rather surprising that a couple of long-time government employees with a background in intelligence, now retired from the business, are physically and emotionally right at home in a space designed by the internationally-known and respected minimalists, Jacobsen Architecture.

But they definitely are.

Years ago, the homeowner saw a magazine feature spotlighting the work of Jacobsen Architecture. “The Hugh Newell Jacobsen home was exquisite—simple but elegant lines and large windows. It was my dream at that moment to someday own a Jacobsen house. That dream stayed with me for over twenty years,” she says.

Their former residences, including an 1850s wagon house, had been just the opposite. “We have always lived in traditional homes, although as I’ve gotten older, I’ve been more and more drawn to modern architecture, particularly, its clean, spare lines,” she adds.

Through the years, she learned a valuable lesson regarding real estate: “If you don’t want to buy a house, don’t go looking at houses!” As she and her husband went out ‘just looking,’ it eventually led them to a 3,000 sq. ft. condo whose all-glass exterior walls offered a 270-degree view of the Potomac River from the Washington Monument to Mount Vernon. But it urgently needed a gut renovation.

“We were drawn into the views, the space, and the potential for living in a glass house, 170 feet in the air with a 1,000 sq. ft. wrap-around balcony.  Jacobsen Architecture was my first thought,” she says. She reached out to Simon Jacobsen, founding partner and son of Hugh Newell, never expecting to receive a reply, much less interest in the project.  “Less than a week later, he visited with us at the apartment… and the rest is history,” she says.

Simon Jacobsen viewed it through the eyes of a well-seasoned architect. “The project resides in a 1970s-era modern brutalist high rise overlooking the Potomac River just south of Washington. To my surprise, the spaces were actually two apartments that were clumsily conjoined 15 years earlier with not much effort or good taste.” Still, he was far from turned off by the space. “The views of the river, Alexandria, and Washington, however, gave me the immediate reflex to start clapping like a circus seal when I first walked in,” he quips.

The homeowner remembers an ironic comment he made that first day—before he knew the homeowners’ professional background: “He walked out on the balcony and said, I envision this as a space that would be a perfect environment for James Bond.” Little did he know!

Although it was architecturally necessary, gutting the two spaces was, according to Jacobsen, “no cakewalk. It took a valiant effort to unmask the two apartments’ walls to expose conduits, plumbing, and utilities without disturbing all of the tenants above and below. So, it was a little like trying to create a thoughtful space in a minefield.”

The homeowners had some specific demands of the finished space. Pre-pandemic, they entertained often and still do, albeit on a much smaller scale, so they wanted a dining room that could seat ten and a living room that would accommodate both large and intimate gatherings. “I am also one of the last people in America who doesn’t want a completely open floor plan. My kitchen is my kitchen. I don’t work well with others! I am a serious cook, and having people underfoot is a distraction to my craft,” she says.

Other demands included multiple bar areas and several guest bedrooms with ensuite bathrooms. Then, looking long term, they wanted a space that could function as an apartment within an apartment for visitors or their own short- or long-term care. “So, we were able to configure a large room with a seating area, bed space, kitchenette and bar, bath, and a closet for both clothes and storage. For now, it serves as my husband’s poker room,” she explains.

Once the demo was done, the fun began for Simon.

“I set out to make the two corner spaces as intuitive and ordered as possible while meeting the clients’ wish list. Because of the owners’ lifestyle, the public areas had to be much like a Swiss army knife: spaces that can do six different things at different times and do two things at once. Then a common avenue and sightline was created in the middle of the two to unify everything,” he said.

Perhaps the most challenging part of the project (and the most satisfying, once it was done) was the kitchen.

“The kitchen was a unique achievement because it wraps around a wall to maintain the commanding views, no matter where you stand while cooking. Another herculean feat was that the countertop is not the only feature of glacier white Corian; the cabinets and shelves are, too,” he said. Making this visually seamless project work was the trick. “We had to work closely with Corian engineers to fabricate a foolproof vertical/perpendicular fastener system for a material that only wants to be horizontal,” he explained.

Simon credits the foreman and the owners for the fact that it all
came together so well, referring to it as a partnership of understanding. “Spy House (as it’s known in their files) also won an AIA-DC award, which is very satisfying, as it is a nod of approval from your peers,” he adds.

And from the homeowners’ perspectives, “We are living in a fairy tale, or a James Bond movie, with a very happy ending!”