Sweeping Beauty on the Beach 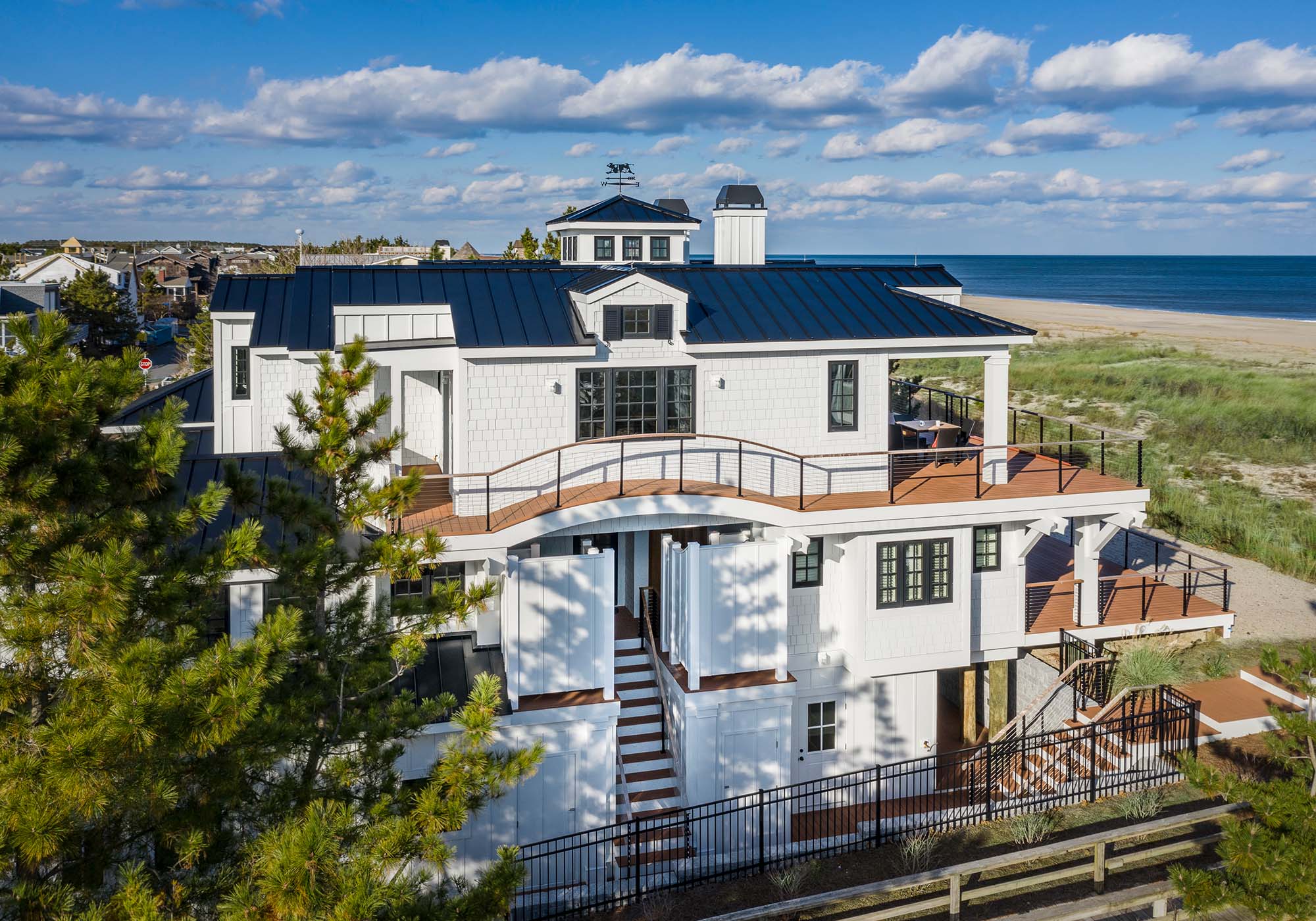 The size and stature of some beach homes occupying prime waterfront real estate appear as if they were built to intimidate. Rare are those beachfront gems that are as inviting as they are impressive. Such is the case with this sweeping beauty in Bethany Beach, which doesn’t overwhelm the space it occupies but instead optimizes it via thoughtful architectural and design choices.

When the homeowners and architect embarked on building this seaside escape, they shared a vision to both highlight the home’s natural surroundings and provide superior access to them.

“I analyzed the homeowners’ wish list, analyzed their personalities,” says Chris Pattey, Senior Associate for the Becker Morgan Group and lead architect of the project. It didn’t happen overnight.

“It was a three-year process from pencil and paper to reality. It was not a turn-key thing,” he explained. The results were worth the wait.

The approximately 4,000-square-foot house is indeed large. However, unlike other beach homes of similar dimensions that too often appear big and boxy, this handsome home benefits from multiple articulated forms that break up the overall structure and add visual intrigue to its curbside appeal. And that’s just the beginning.

Throughout the home, both inside and out, smart architectural decisions deliver style and substance that translate to an optimal beach experience. Occupants in the light-filled master bedroom wake up to a perfectly unobstructed view of the ocean. Walking outdoors to a completely level front deck requires only a single step down to wriggle one’s toes in the sand. Decks on every level maximize exposure to picture-perfect views while minimizing harsh exposure to the elements, including strong winds and searing sun.

Interior design choices also showcase the owners’ desire to bring the beauty of the outdoors into the home. “We wanted to make it as light and airy as possible, to really capture the light coming in,” says homeowner Joanne Phelps. “We did colors that mimicked the outdoors—sand and surf.”

The walls in the main living room serve as a prime example. Accented in white trim, the predominant color is a breathtaking pale shade of aqua blue (Tidewater by Sherwin Williams) that possesses faint gray and green undertones, much like the ocean’s ever-changing hues.

Many of the home’s deliberate design strategies span both aesthetics and function.

There’s the arched bridge that connects the home’s east ocean decks to its west sunset decks, creating a subtle yet eye-catching architectural feature in what might otherwise have been built simply as a utilitarian connector.

The black windows, juxtaposed against the white exterior, give the home its crisp cottage look with a modern, trendy edge. While the windows add visual drama, they are also insulated to meet the requisite energy code and high wind rating. Their sun-protected tint ensures that the home’s occupants don’t bake in the summer heat and allow for crystal-clear gazing outward.

The multiple exterior steel cable railings are yet another feature of the home that serves a dual purpose. They afford protection, as would traditional vertical picket railings. But unlike the picket railings, which in abundance would present a busy appearance and obstruct the ocean view from certain vantage points, the steel cable enhances the view and maintains the home’s clean, modern aesthetic while adding a nautical touch.

In another effort to minimize exterior “clutter,” Pattey chose to design the house without gutters or downspouts. Because of his experience building in beach neighborhoods, he knew the metal roof could adequately handle the flow of heavy rainwater, largely because the porous nature of sand allows for much easier drainage than lots built on dirt.

Sand can, of course, find its way inside the beach homes of even the most diligent homeowners. Another smart design choice minimizes that risk: a well-placed staircase leads directly from the home to the two outdoor showers. Elevated to maximize airflow and open to the sky, they invite natural light.

Smart, thoughtful decisions like these help create the quintessential beach memories for the homeowners and their guests, like when they’re out on the deck overlooking the ocean. “We’re out there a lot. I’m a sun person,” Phelps says. “My husband is the opposite; he goes for the shade. It’s the best of both worlds.”