The High-Heeled Gardener: Hope Blooms in the Winter Garden

“… and there is pansies, that’s for thoughts.”

As January slumbers on, most of our gardens are quiet—even bare—locked in winter’s somber embrace. When looking at stark branches and frozen ground, it seems almost unreal that flowers exist at all. And around this time, my heart is especially restless; I crave color, tender green, a blossom… anything alive in the garden.

But I’ve learned it doesn’t have to be this way, thanks to the winter-hardy pansy. The pansy is an old-fashioned, happy little flower that often has a ‘‘face” composed of bright petals splashed with colors. What’s more, it has ancient beginnings. The pansy’s ancestor is the viola, used in Greece for herbal medicinal purposes around 4 B.C. 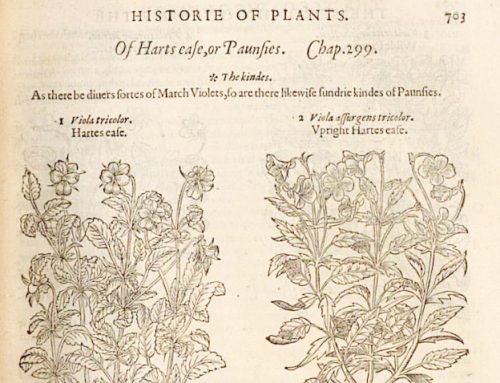 John Gerard’s entry on pansies in his Herball or “Historie of Plants,” published in 1597.

Its relative, the wild field pansy, nicknamed ‘hearts-ease,’ inspired one of our greatest poets: William Shakespeare. In A Midsummer Night’s Dream, he writes that the flower was originally pure white until it was struck by Cupid’s arrow. The wound from the arrow formed the dark purple center of the petals. This tale of Cupid, coupled with the flower’s name, from the French “pensée,” meaning thought, has linked the pansy with ideas of lovers and dreaming. Nineteenth-century botanists were fascinated with the pansy. In his renowned Herball, published in 1857, John Gerard wrote at length about ‘hearts-ease’ and its ability to relieve inflammation and other ailments. He was not incorrect. Today, some scientists believe that the garden pansy—especially its flower—is a promising source of natural antioxidants.

I dismissed pansies at first, believing them to be short-lived and a waste of time. But last year, I planted eight blue and yellow ones in my small street-side garden. I have never been happier. Other lovely winter bloomers such as camelia and Lenten rose have shyer personalities and the ephemeral blossoms of a perennial. But not the pansy: with remarkable stamina, it survives snow and temperatures down to the single digits and delivers almost constant delicious color. And it looks beautiful in a winter salad! Despite the season’s assault, they float brilliantly, small life rafts upon a frozen sea… surely a testament to love’s endurance.

Why not try planting ‘hearts-ease’ this year? All you need is a shovel, a six-pack or two of pansies in your favorite colors, and a warm winter day—one of Maryland’s gifts to gardeners. These beauties will tide you over until spring when the real action begins.