The High-Heeled Gardener | The Gardenia’s Powers 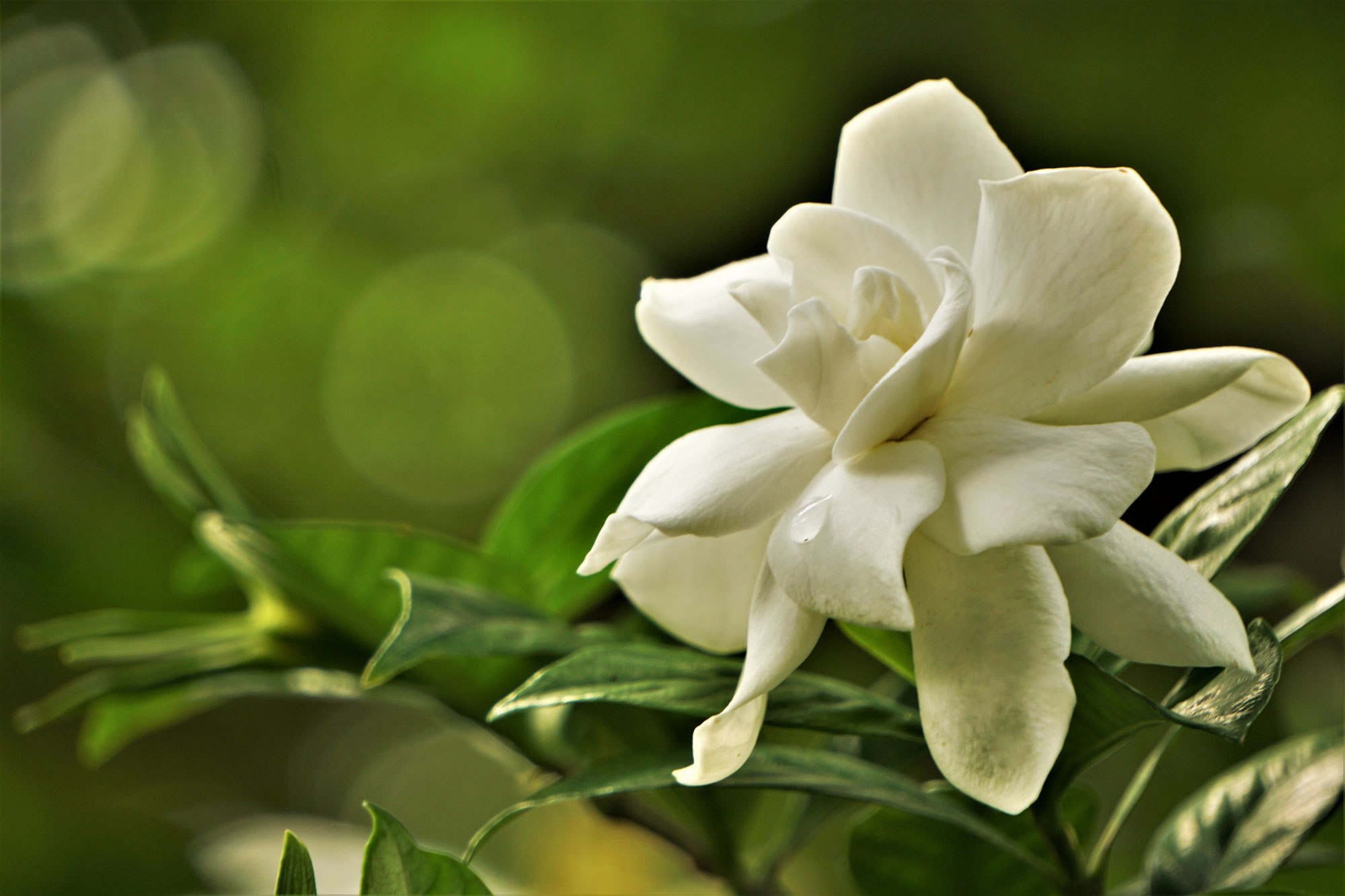 Every summer garden needs Gardenia jasminoides to add gloss, beauty, and an exquisite fragrance that drifts upon the air to find you. What’s more, the ancient gardenia, which appears in Greek mythology, adds a certain mood and mystique. Alongside other showy summer blooms, its deep green glossy leaves and snow-white blooms are designed to caress each sense: touch, sight, smell, and even taste.

Sacred to Morpheus, the Greek god of dreams, gardenias were thought of as Moon tears or Moon fruit in ancient lore. The Greeks believed the aroma of a gardenia could transport a person to the Elysian fields of paradise. The Chinese used the gardenia in love potions. In the conservative Victorian era, gardenias were messengers of secret desire and a red gardenia was a silent way of saying “I love you.” Today gardenias are iconic southern flowers, appearing in bridal bouquets as emblems of love and romance. The leaves symbolize self-reflection, understanding, and alignment, and are used in meditation rituals.

Native to China, it was traders from the Far East who first introduced the gardenia to Europe in the 1700s, a time of great cross-continental collaboration. English merchant John Ellis and Swedish naturalist Carl Linnaeus traded the gardenia for native American plants offered by Scottish-born naturalist, Dr. Alexander Garden, who lived in Charleston, South Carolina. Garden propagated the gardenia so successfully, that Ellis named it in his honor. The second part of the name “jasminoides” references its scent, closely related to jasmine.

Long recognized for its mood-enhancing properties, the gardenia is the subject of much research. The Chinese were perhaps the first to become aware of this beautiful plant’s potency. Dating back to the Song Dynasty (960-1279 AD), they have harvested its orange, berry-like fruits—known as Zhi Zhi or Cape Jasmine fruit—to treat irritability, stress, and insomnia.

Scientists are finding that the same compounds in a gardenia’s scent have mechanisms similar to those found in barbiturates and anesthetics, such as Propofol. Merely smelling these isolated chemicals reduces anxiety and promotes sleep, at least in mice. They hope to discover whether similar results may be replicated in humans.

The gardenia needs just the right spot in your garden where it can receive morning sun and afternoon shade. Humidity is essential, so purchase a sprayer and mist your gardenia every day. To encourage good drainage, plant the root ball high—one or two inches above the ground—or in a pot, the same size or a little larger than the plant. Plant in acid soil with a Ph between 6.5 and 7.  Top this with about two inches of organic matter such as Leafgro. Two weeks after planting, apply a granular acid-based fertilizer. Keep soil moist but not soggy.

Now, some complain that the gardenia, though beautiful, is hard to grow. I prefer to think that when a plant has a problem, it “talks to you.” Let’s just say that the gardenia is a “talkative plant.” Pay attention. The best thing is that it expresses itself quickly and you have time to fix the problem if you act fast!

For example, I bought a gardenia recently and its lower leaves immediately turned yellow. I learned that I had over-watered it. I removed the yellowing leaves, watered one inch a week only, and it recovered. When some of its blossoms dropped off, I realized I had put it out too soon. It was below 65 degrees, and gardenias, it seems, do not like cool temperatures.  Now, when the weather is in the 70s, I have it out on my back patio and it’s filled with blooms. The flowers will fade to a dark cream, much like a spent magnolia blossom; remove them and new buds will open soon.

A garden brings light into the mind. As the gardenia’s piquant bouquet drifts towards you and the swan-white whorls capture the sunlight, your mood can’t help but brighten; you will start to believe again that all things are possible. How else can a common flower have so much complexity, an essence that conjures Cleopatra’s perfume or an Elysian field? Out of the dark earth, the gardenia springs, impossibly perfect. The gardenia is unusual in that it grounds the body in the moment yet hints at a tangible sweetness just out of reach. The scent is intense but so elusive that it borders on sorrow. When it has found its equilibrium, with your help, its perfume will drift upon the air to find you and change you.

Gardenias need nutrients to produce so many blossoms. Feed them with an acidic, slow-release fertilizer such as those used for azaleas or camellias. For the organic gardener, blood meal, fish emulsion, or bone meal work well.

Gardenias grow well in the southern regions, especially in South Carolina, Georgia, and Virginia. Maryland’s Chesapeake Bay counties are ideal. This classic southern plant does not appear in New England, where the climes are cooler. So, we are lucky to have Maryland’s humid summer days, where the gardenia thrives.