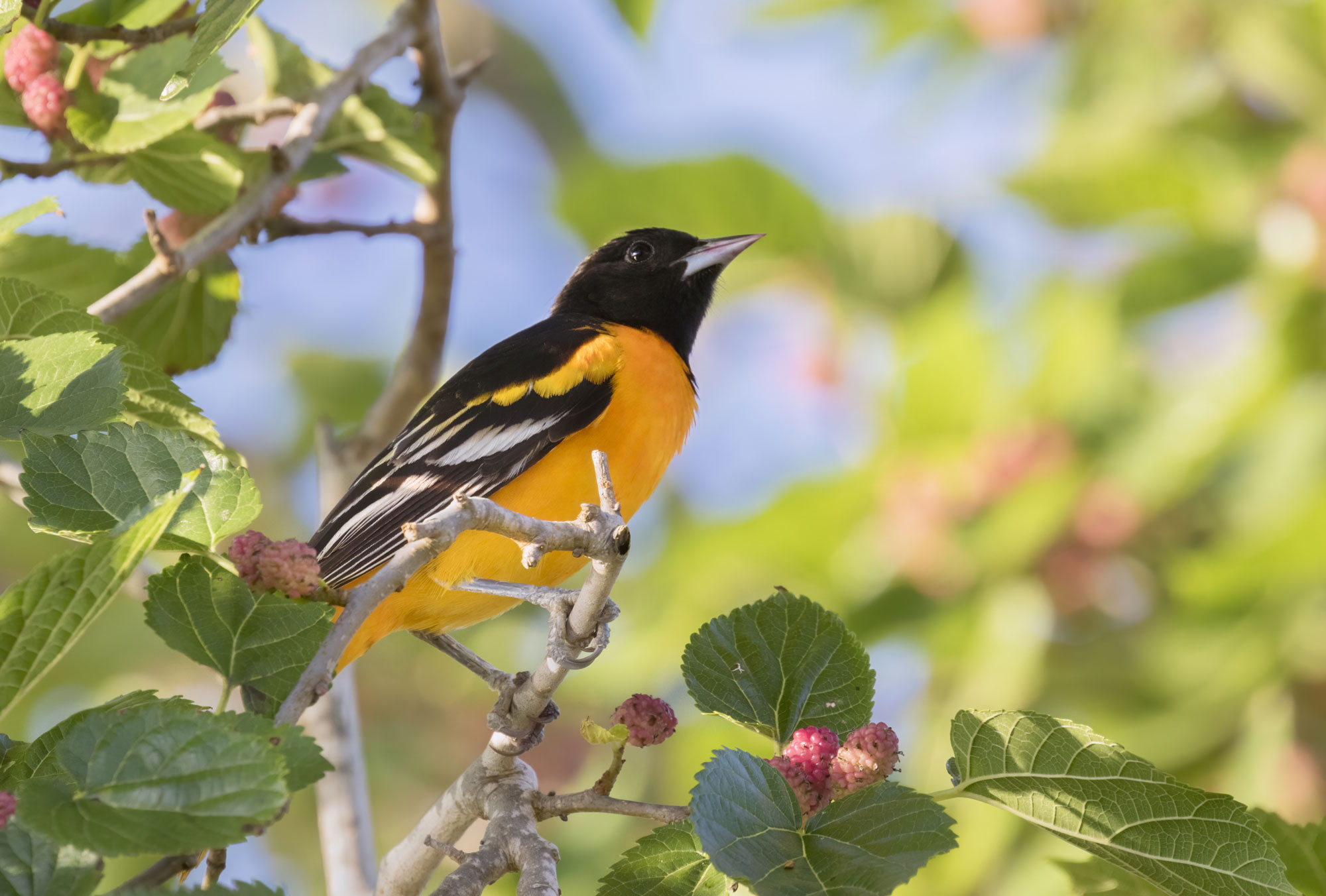 I grew up roaming Maryland’s woods and rivers, attending baseball games, and cheering on our Baltimore Orioles baseball team. But I had never seen the actual bird. I reasoned that the oriole was very rare, or visible only to mysterious professionals who worked at nature centers. What a joy to find out that I was wrong!

I learned that these flame-orange and black neotropicals are not rare, but shy, preferring the highest tree branches. They fly into Maryland from March through May, migrating from Mexico and the tropics. They will stay the summer before returning to warmer shores around September.

The Baltimore Oriole may be especially historic. According to the Maryland State Archives, in 1698, “Baltemore Birds” with their brilliant plumage, “were among the “Beasts of Curiosity” sent from England to Maryland’s nobility.  For centuries, exotic animals were kept by kings and queens. However, in the early 18th century, private individuals, usually nobility, started their own collections to display wealth and power.

In the 1700s, colonists in Virginia and Maryland called this species “the Baltimore-Bird.” Males wore orange and black, the heraldic colors of Lord Baltimore, patron of the Maryland colony. Building on this history, Maryland adopted the Baltimore Oriole as its state bird in 1947.

These famous flyers can be attracted into your backyard without fuss—but not with birdseed, which they do not eat. They have a sweet tooth, and, depleted from migration, need the energy sugar provides. Here’s my method: buy a bag of large bright oranges, cut 10 in half, and nail them to trees in your back yard or set them on feeder platforms. Try groupings of two and three. Give it a day or two and watch discretely.

Let me warn you—with 20 or so oranges in your backyard, your neighbors may look at you strangely. But here is the goal: to create a sea of orange visible from the sky. I did this once with my father and about twelve swooped in, perching right on the oranges sometimes, dipping in their beaks for five to ten seconds at a time.

This visitation was one of the most beautiful moments of my life, especially since it happened with my dad.

While you are at it, keep an eye out for their nests—one of the wonders of the avian world. The female oriole typically suspends her nest between two high tree branches. With great finesse, she uses rapid thrust-and-draw movements with her beak to weave a deep pouch of milkweed fluff, yarn, and whatever is at hand, much like crocheting or knitting.

Keep an eye out for the oriole’s favorite trees. Ornithologists note they favor elm, maple, sycamore, birch, apple, black cherry, and oak. Female orioles lay four to six eggs from May through June. The young fledge in about 14 days, and off they fly—hopefully under your observing eye.

Remember, if the high-heeled gardener can do it, so can you. The best part is that no special feeders or mixes are needed. Give it a try! 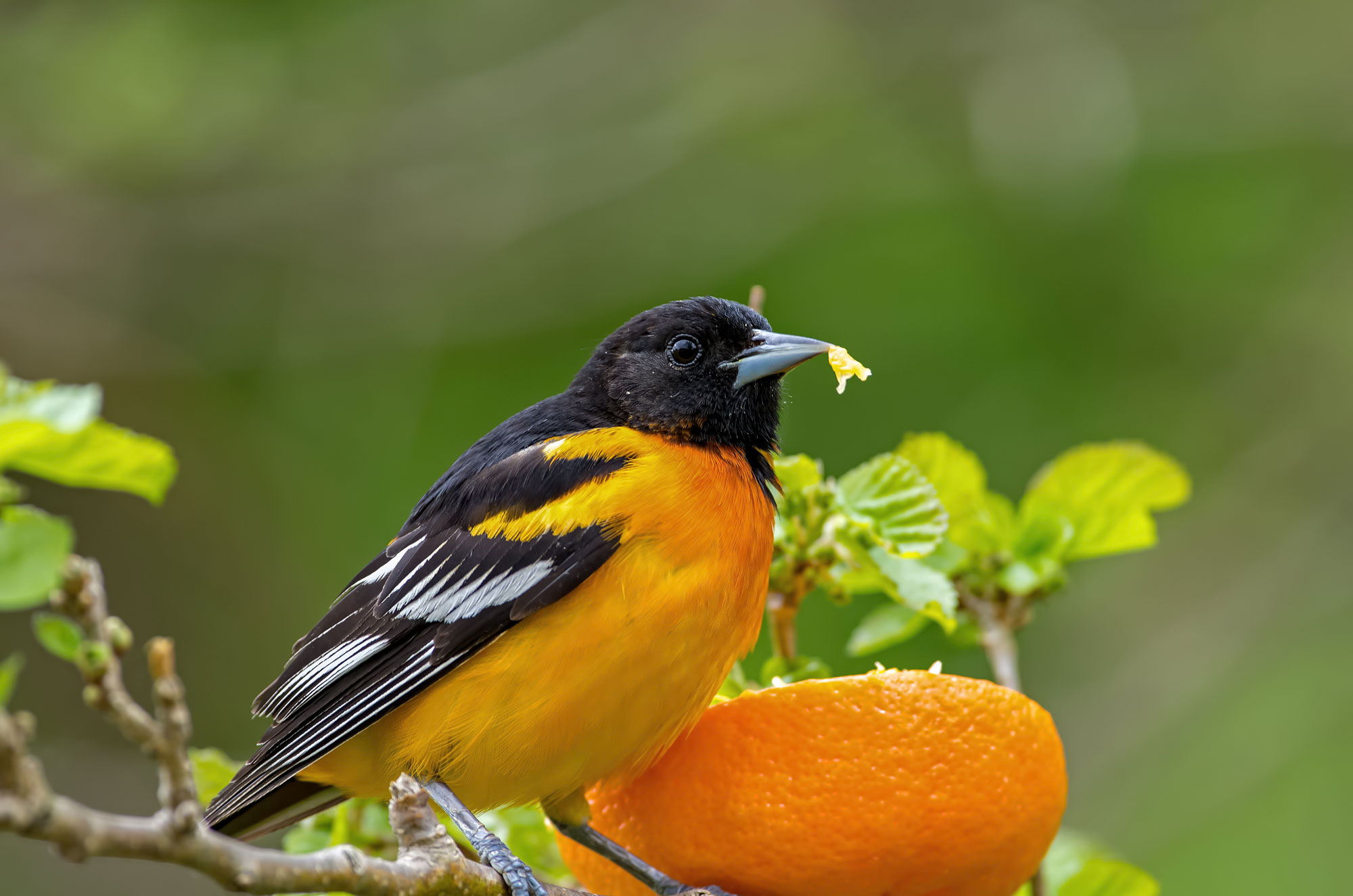 To attract the Baltimore Orioles and other birds, plant bright fruits and nectar-bearing flowers, such as raspberries, crab apples, and trumpet vines.

Like many English language words, “oriole” has Latin roots. It comes from aureolus, Latin for “golden.”

Baltimore Orioles sometimes feed in an unusual way called “gaping”: they stab their closed bill into soft fruits, then open their mouths to cut a juicy swath from which they drink with their brushy-tipped tongues. (The Cornell Lab of Ornithology)

The Baltimore Oriole is a songbird, with a distinctive flute-like whistle. To hear its songs and learn more, visit Cornell’s Lab of Ornithology at allaboutbirds.org/guide/Baltimore_Oriole/overview