There was a point last month when bleakness seemed to reign. Even the seed heads of last year’s perennials looked lonely, despite hosting a finch or two. Deep in my discontent, I drove down my parents’ winding driveway to see a startling sight: four camellias blooming in my mother’s secret garden, their radiance reflected in the vanishing fog. Soon after, while sipping hot cups of tea, another friend, Cyndra Moygazel, revealed 35 hellebores almost glowing in her lush garden. Then it hit me. Winter is actually full of flowers! We are not necessarily taught this. I am happy to share that there are many flowers that burst into bloom in cold weather. With a little planning, they can sparkle like jewels in our winter gardens. Following are personal favorites suggested by plantsmen Jay Graham of Moody Graham Landscape Architecture and Bob Hruby of Campion Hruby Landscape Architects. 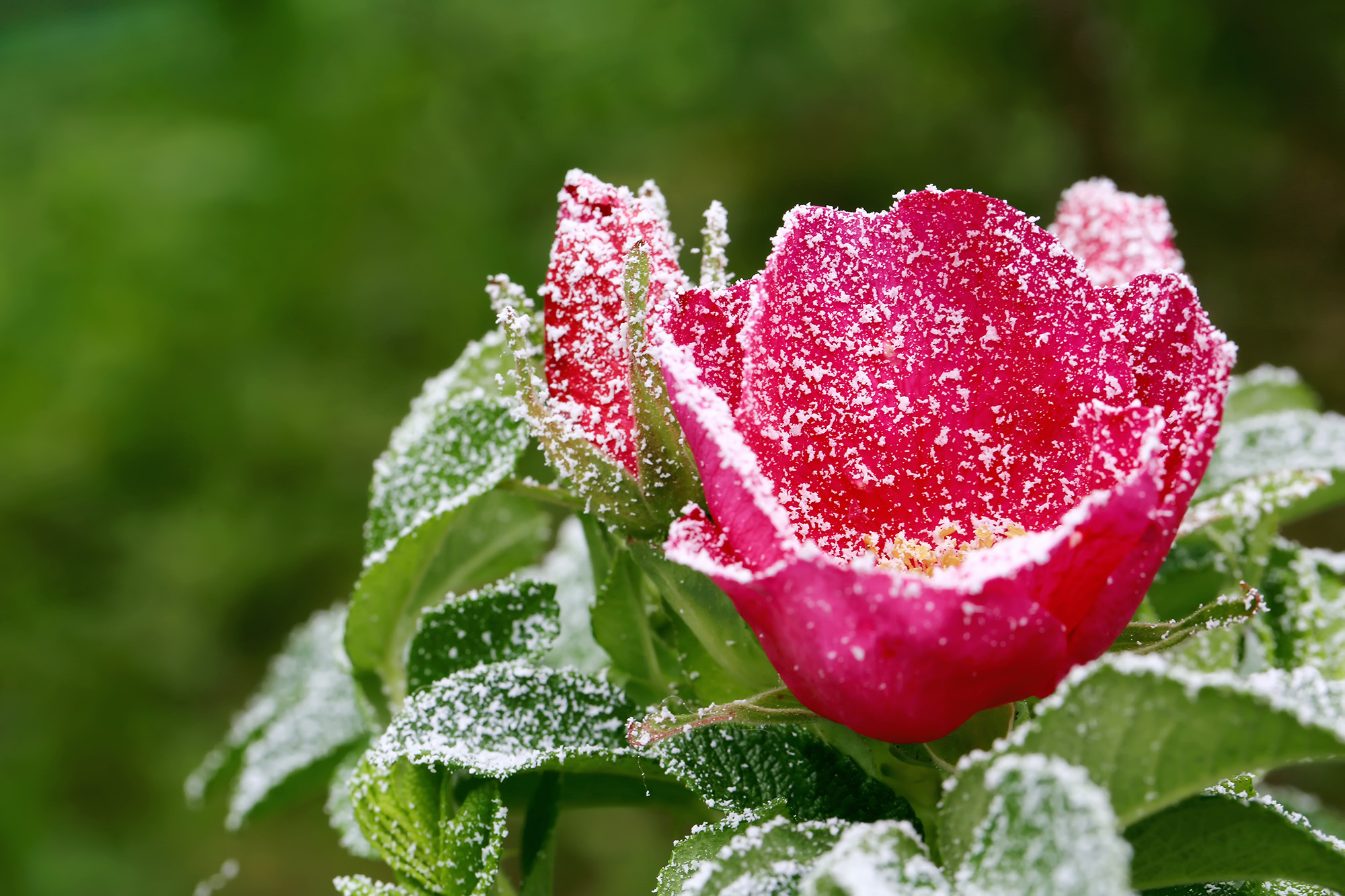 The winter-blooming Japanese Camellia, “the tree with shining leaves,” is surely the star of the winter garden. Native to China, Japan, and Korea, the camellia is a member of the tea family Theaceae. One variety of camellia, camellia sinensis, is the plant from which most teas are made. However, in Northern America, we think of the camellia as an ornamental shrub. One noteworthy specimen is Camellia japonica ‘Dewa-tairin,’ first recorded in Japan’s Higo Province in the 1600s. Flat, large-petalled flowers have up to 250 showy yellow stamens that spring freely from their centers. Because they bloom prolifically in cold winters, Higo camellias were beloved by the samurai, who saw them as symbols of steadfastness and bravery, according to the International Camellia Society.

Plant in part shade, sheltered from the wind. • Grow in well-drained, rich, acidic soil. • Feed with an acid-forming fertilizer in spring and mid-summer. • Grows 6 to 10 feet high and up to 10 feet across. 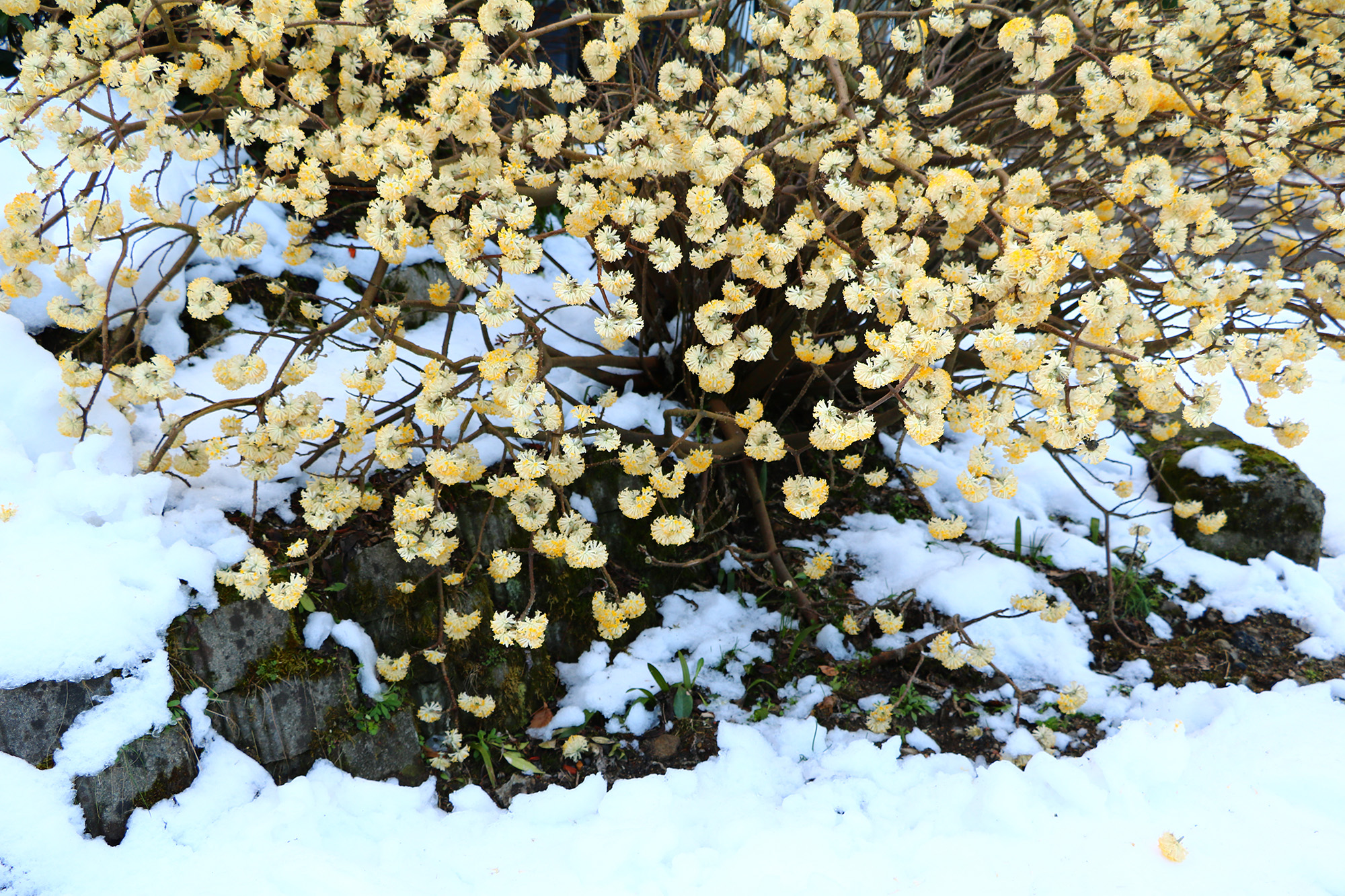 If the camellia is the star of the winter garden, Edgeworthia must be the sun. Graceful ascending branches begin to bloom in December and continue through the winter.  Dozens of tiny individual florets create 2-inch clusters of beautiful yellow flowers. In spring, after the blooms pass, its bluish foliage has silvery undertones. Edgeworthia, native to Nepal, China, and the Himalayas, has an additional bonus: an intoxicating fragrance similar to the gardenia.

Edgeworthia was named in the early 19th century after an amateur Irish botanist, Michael Packenham Edgeworth, and his half-sister Maria Edgeworth, a novelist. Michael sent many seeds and plant materials to her and other botanists when stationed as an administrator in India from 1831 through the 1850s. The ‘paper bush’ was named for its primary use to make paper—and is still used in Japan to produce ornamental paper and banknotes.

Grow in partial shade and well-enriched, moist soil. • Space plants 7 feet apart. • Maintenance on this plant is minimal; prune to remove diseases and damage. • Grows to a height of 7 feet and width of 7 feet.

Note: Edgeworthia chrysantha has the unusual ability to branch trichotomously: the apical meristem forming the end of each stem splits into three sections at once. This trait is shared with no other known flowering plant. 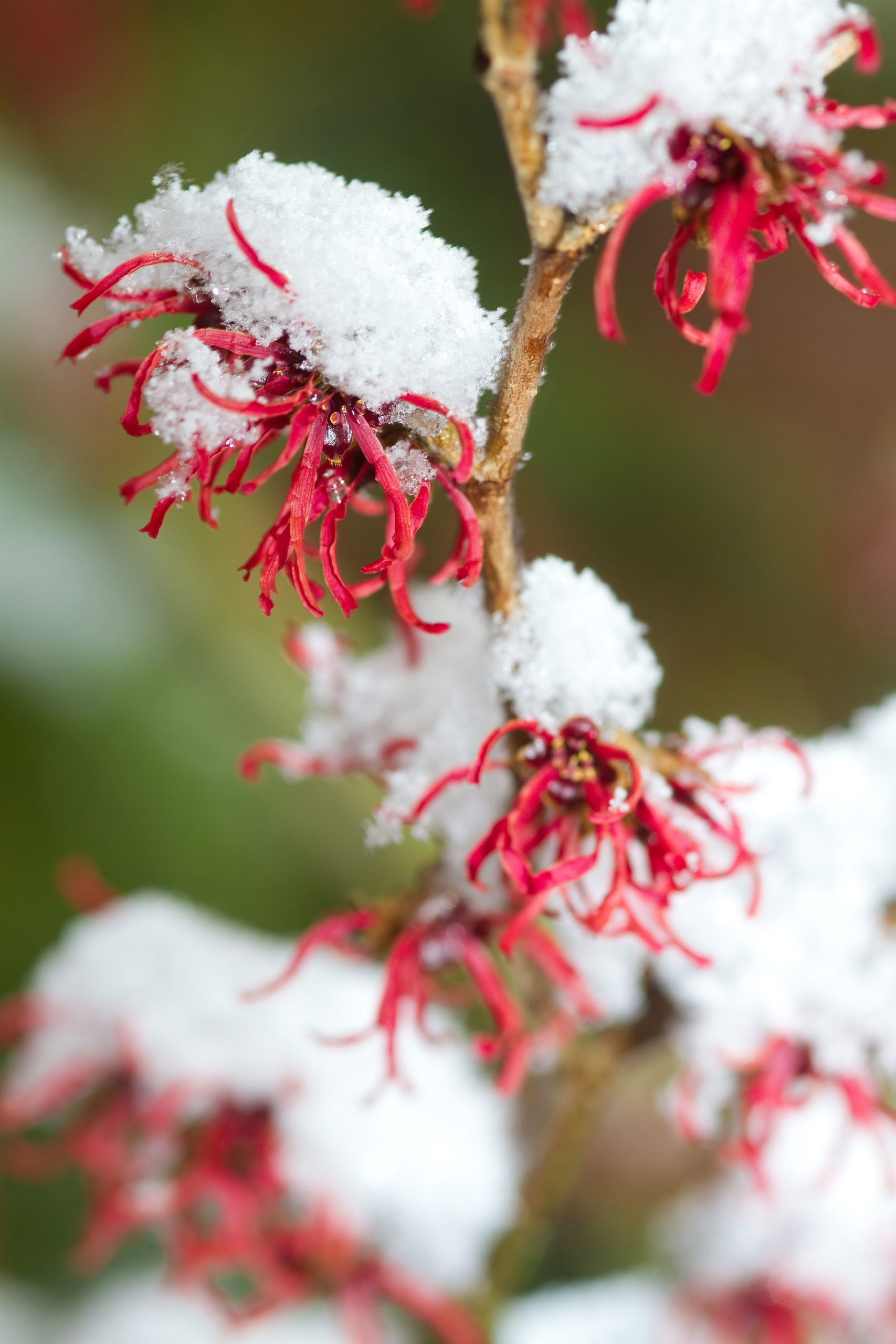 Witch hazel flowers in late winter and early spring with branches blazing in fragrant bright yellow flowers. On mild days, their spidery petals unfurl, but when the temperatures dip below freezing, they close up to prevent damage. Inspired by its beauty and perhaps under its spell, the Royal Horticultural Society granted witch hazel the prestigious Award of Garden Merit in 1993.

Native Americans introduced Hamamelis virginiana, which is both beautiful and medicinal, to early Puritan settlers in New England. The Osage used witch hazel bark to treat skin ulcers and sores; the Potawatomi steamed twigs over hot rocks in their sweat lodges to soothe sore muscles; the Iroquois brewed it in a tea to treat dysentery, colds, and coughs. Today witch hazel is harvested and steam-distilled to create a natural base for toners, cleansers, and makeup removers.

Grow in average, well-drained soil. • Prune in spring after flowering. • Prefers full sun to part shade. • Grows up to 12-15 feet tall and wide.

The hellebore’s “blooms” are actually sepals that protect the true flowers and last for several months, from February until May. The foliage is evergreen in all but the coldest regions. Its pendulous white and mauve blooms are quietly exquisite, but in ancient Greece, hellebore was prized for much more than its beauty. Hellebore is a poisonous member of the Ranunculaceae, a botanical family that includes other deadly species such as aconite. Roman naturalist Pliny the Elder wrote about the use of the white-flowered Helleborus niger, or Christmas Rose, as early as 1400 B.C. A violent purgative, Christmas Rose enjoyed popularity as a medicine from medieval times to the Victorian era. According to writings found in the Loeb Classical Library, Hellebore was mixed with lentils or tucked between the split halves of a radish and fed to the patient to induce purging.

Grow in deep, fertile soils that remain moist and well-drained. • Cut back the large leathery leaves when flowers and new foliage emerge. • Prefers shade to partial shade and a location protected from the wind. • Grows 12 inches tall and 24 inches wide.

Note: Paracelsus, a 15th-century physician and alchemist, developed an “elixir of life” that included, among other ingredients, components of Christmas Rose. 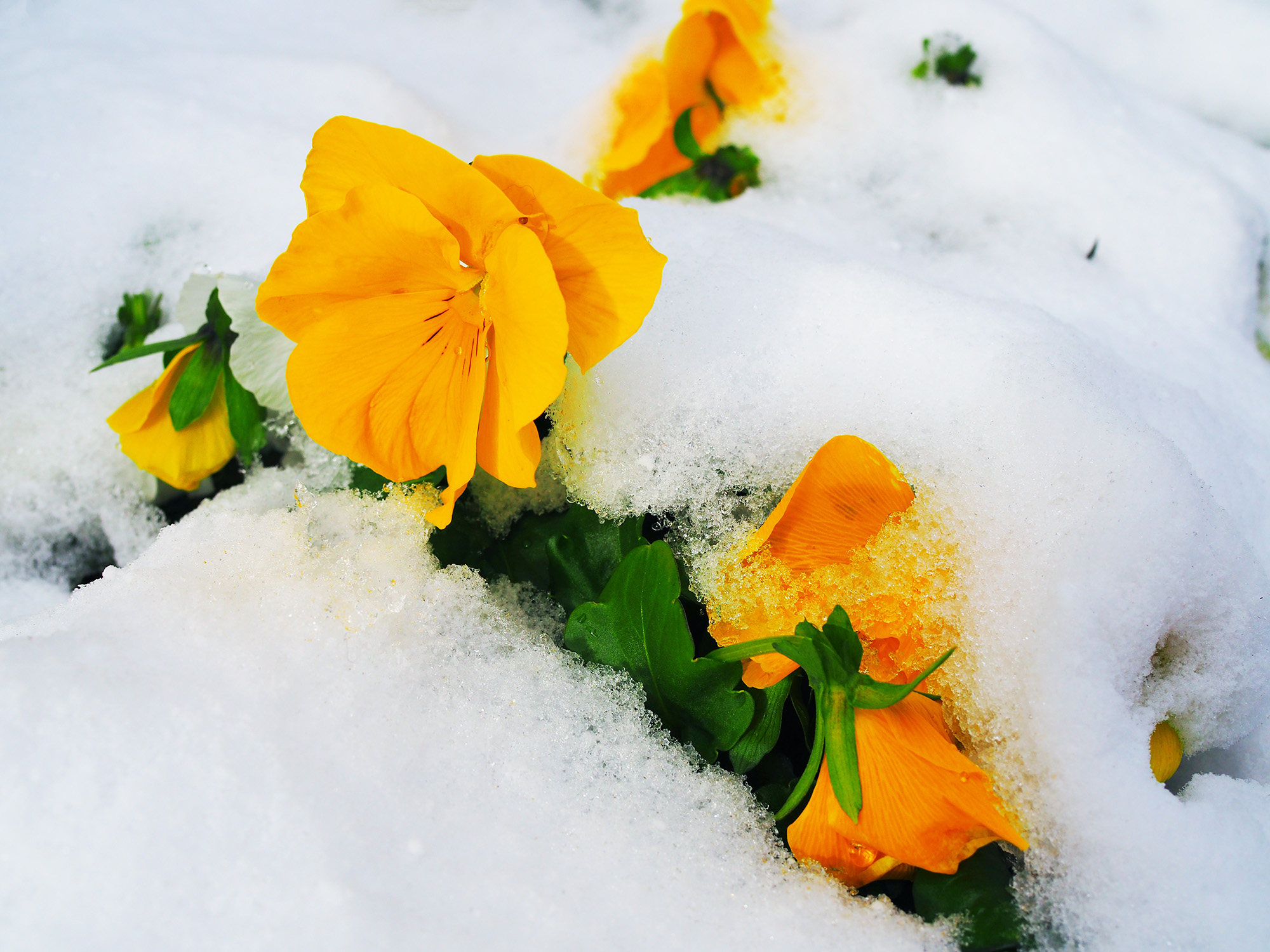 This smiling plant is one of my favorites. Easy to grow and care for, pansies are hybrids of the viola, a large genus containing 500 species. The hardy but delicate viola was cultivated by the Greeks in the 4th century B.C. for herbal medicinal use. Much later, they inspired William Shakespeare to write of romance. Pansies love cold weather; their petals, which are marked liked little faces, peer up at you through the snow and lift the spirits.

Plant in the fall for blooms throughout winter and early spring. • Water thoroughly about once a week. Do not over water. • Deadhead to extend blooming season. • Prefers full sun to part shade and well-drained soil.Grows up to 8 inches tall.