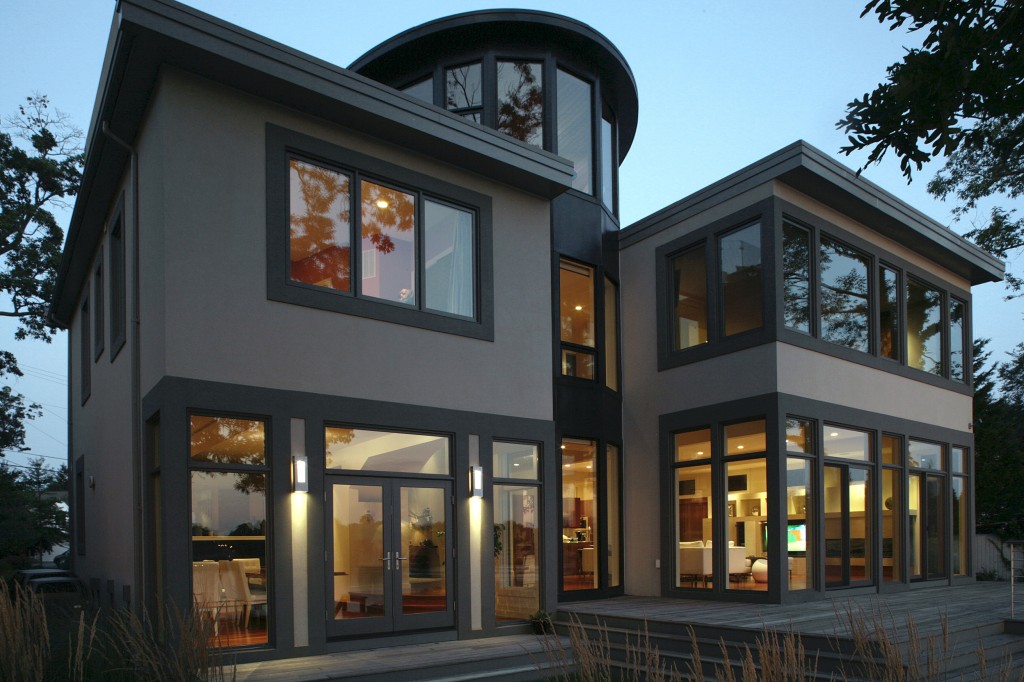 During this home’s construction from 2005 to 2007, the little boy next door told his mom he was learning geometry from the house, recalls Dr. Edward Vesely, who lives in the home with wife Dr. Angela Miele, and their two young children. Architect Chip Bohl designed a house for them on South River composed, basically, of two rectangles with a cylinder in the middle. One of the most striking features of this home is its sculptural, serpentine staircase leading to an oval cupola with 360° views.

Bohl, with offices in Annapolis, Baltimore, Los Angeles, and New York, explains that the home’s design evolved from the staircase and tower. He wanted organic and curved elements to contrast with other rooms that are square or rectilinear. He chose to make the cupola an ellipse, so he could manipulate the oval’s formal properties. But, what is so great about an oval? An oval, to an architect, is a powerful tool. Bohl chose the oval because it has not just one, but two centers.

“I prefer an oval shape over a round shape because a circle is just one dimension.” A circle has “a radius and diameter, it’s static. But in an oval, you have two centers, two foci. It is much more complex to work with an oval form, an egg form, rather than a sphere.” Bohl explains that, as you descend from the cupola and travel down the stairs, the oval begins to elongate. It widens at the second floor, flowing out into the bedrooms, and by the time you reach the first floor, it has almost disintegrated. “The first floor is the loosest form of the oval,” he says. The reverse happens as you climb the stairs. “On the first floor, that oval is only partially defined and as that space and staircase ascends to the cupola” where “we have that pure oval form, ” adds Bohl.

The oval appears and reappears. It integrates into the house a great vertical movement, says Bohl. “On the first floor, when you see a fragment of the curve, it’s helping you to recall the cupola room.” The dining room, Bohl notes, “has a curving slice cut out of one side of it, that further reminds you of the three dimensional aspects of this house.”

The stairs and the ellipse in its purest and most diluted form posed a great challenge to builders. “We interviewed several builders and had them examine Chip’s plans,” says Miele. When they got to the tower and stairs, they would say ‘we really can’t visualize that’ and that was it. They were gone.” Vesely adds “or if they could do it, they wanted to charge a ridiculous amount of money.”

The couple almost despaired and even considered asking Bohl to revise his ambitious plan. But then Brad Lundberg of Lundberg Builders stepped in. “Lundberg took a look at it, he talked with Chip and he studied the plans. He never once implied this was impossible, he never said no,” says Vesely. Lundberg said his team, led by Keith Germershausen, has over 30 years of experience building custom homes. In fact, that is their specialty, and they thrive on solving problems. Building the ellipse according to plan and outfitting it with windows was taxing. Lundberg selected superior-quality glass windows from Loewen Windows; these were designed to fit the ellipse’s curves. 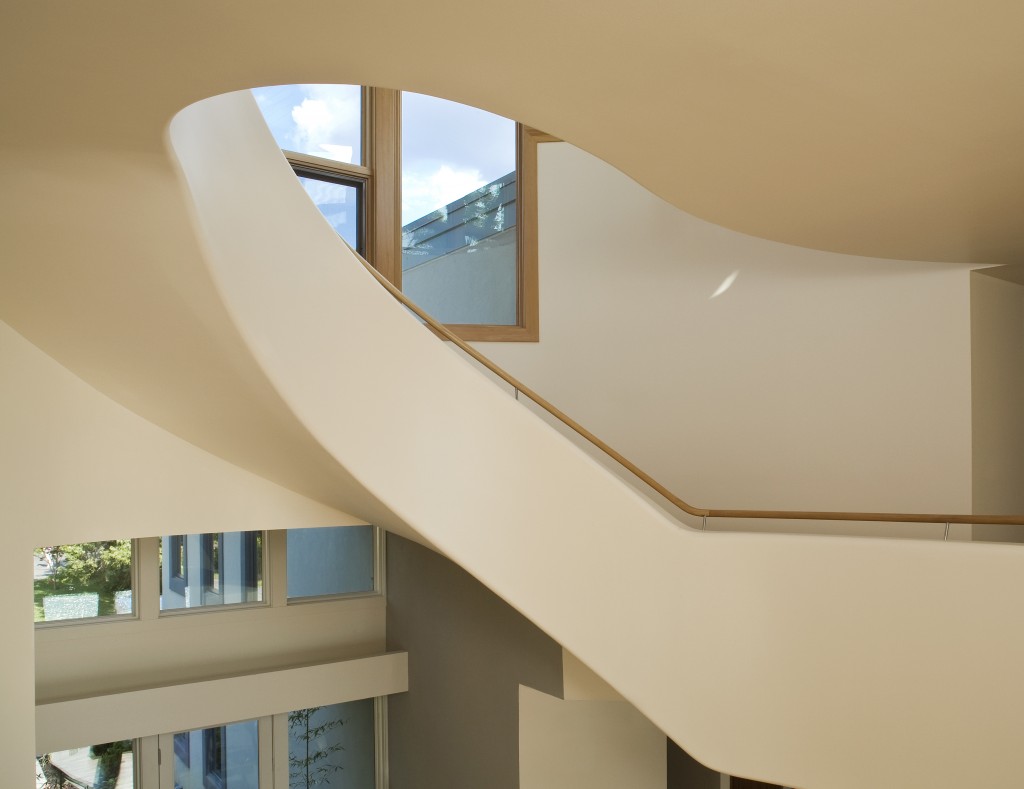 “In an ellipse, every window is slanted, so the space in between has to be perfect,” says Germershausen. “That is what custom building is all about,” explains Lundberg, who began his career as a carpenter framing houses. “You have to always think outside the box. There is no standard answer. Every decision impacts twelve others and there are things you don’t think about until you
get there.”

The mahogany stairs demanded special attention. Standard brackets could not be used to attach the handrail. Instead, it was mounted with elegant and barely visible stainless steel dowels so the rail appears to float alongside the stairs. Also, the stairs were built in sections and transported to the job site, which was very narrow. Then, they were “chain dropped” which means they were attached to a chain and then dropped into place with a crane. “We had every safety in place you can think of, but to me those were some of the most anxious moments,” says Germershausen.

The design, labor, and many decisions required to construct the stairs result not just in stairs that are dramatic looking and useful. Rather, the stairs, Bohl clarifies, call “attention to the beauty of movement of the human body, its dance. The stair is about celebrating flow and movement, about being ambulatory.” When a person enters the home, Bohl states, “they want to go up that stair…put [their] hand on that hand rail and see where it goes.You don’t stop. You go all the way
to the top.” 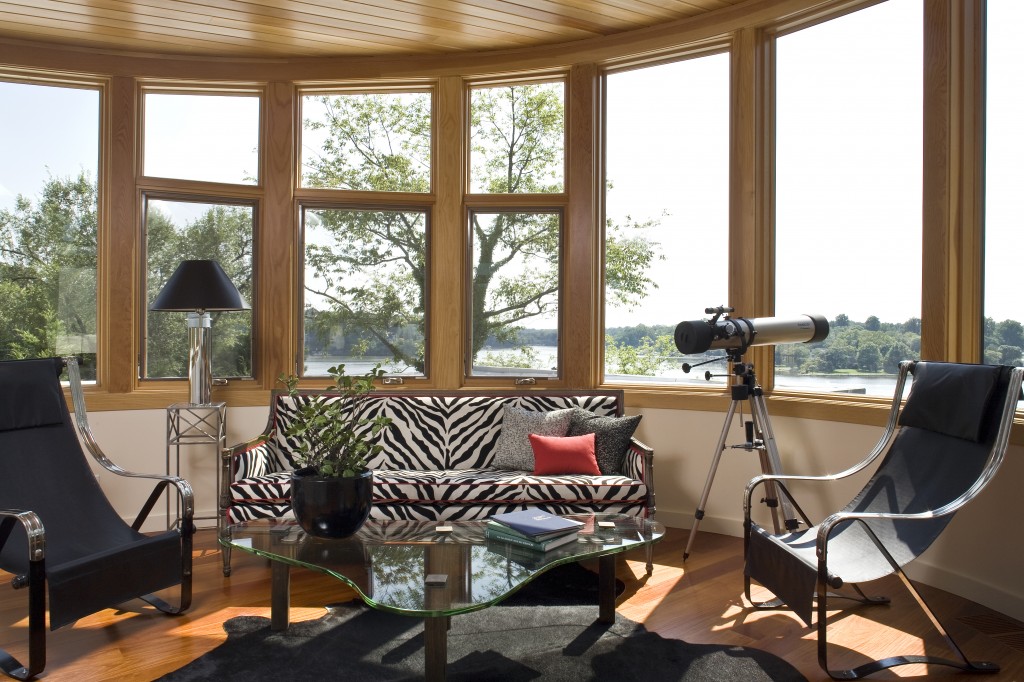 There is a strong element of play in Bohl’s architecture, especially evident in the Vesely’s home. “In my architecture and in my work, playing is the most important thing, but in order for play to be successful, every architectural element has to do more than one thing. If you create a room or create a door and it only does one thing, its not successful, people are bored with it, it does not reach the complexity of life experience.” Bohl points out that the front door, for example, is not just the front door, but that “it is also the anchor for one facet of the cupola.”

But, to love this house, you don’t have to understand or know how circular and linear forms can be manipulated to shape the space we move through and rest within. You just have to sit back and enjoy this home that makes visible the power of the oval and rectangle in a joyous play of forms.