The Upside of Downsizing 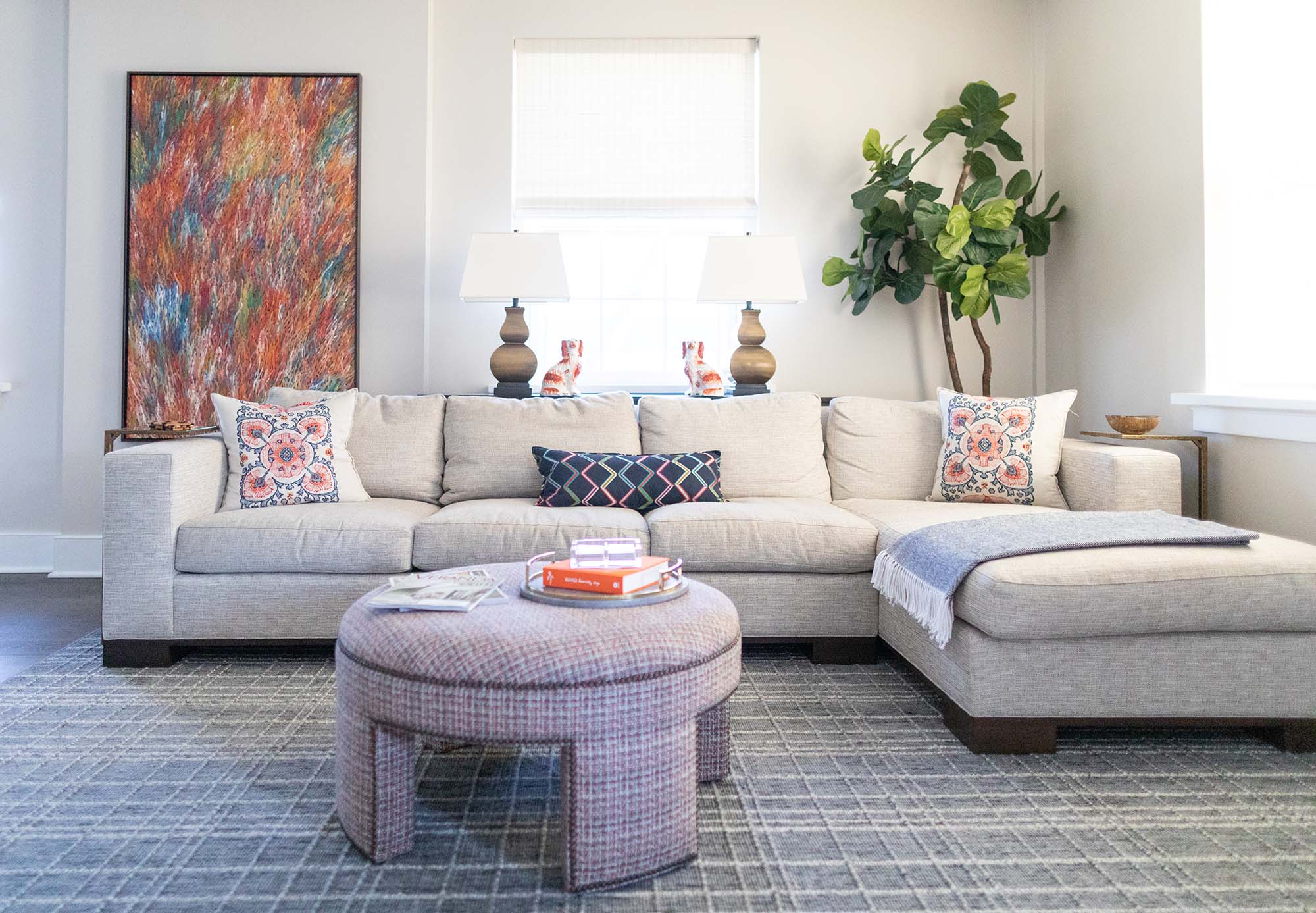 When Wesley Pehlke of Annapolis-based design studio Simply Wesley started working with her clients Rita Cavanaugh and Jerry Kafka—downsizers moving from a large, traditionally-decorated home to a condo across from the Annapolis harbor—there were two driving factors from the very beginning.

First, a new aesthetic. “As part of this downsize, they wanted to go a little more cleaner, a cross between transitional and contemporary,” Pehlke says.

Secondly, Cavanaugh and Kafka had sold all their furniture with their old home. All they wanted to keep was their art collection, which would ultimately become Pehlke’s starting point—especially the colors depicted. “Their artwork was a driving factor in my designs, for sure,” she explains.

This idea stood at the forefront of her mind as she selected fabrics and finishes for all the furniture, such as the upholstery for the ottoman in the living room, which has a fine tweedy pattern that almost appears a solid neutral color from a distance. “If you look at it a little more closely, you can actually see it’s multicolored,” Pehlke says. “I didn’t want every single piece of upholstery to be cream or off-white or neutral.”

Pehlke further achieved these dashes of color by choosing boldly colored embroidered fabric for the throw pillows on the sofa, with its oranges, reds, and blues. Embroidery tends to look traditional, but because this fabric had reverse embroidery, it felt a little more contemporary, she explains.

Another place where Pehlke went for inspiration? The architecture of the building itself. The exposed brick walls in the room that would ultimately become the home office were, as she describes it, “such a special part of the room;” she didn’t want to cover them with built-in bookshelves. “I designed all these floating shelves, so the brick still pops,” she says.

The old-fashioned brick with the contemporary shelving, seating, and lighting provides a nice juxtaposition, something Pehlke likes, noting that she aims to pair pieces that complement one another rather than match. “Too much of a good thing is a bad thing,” she says. “You can’t have everything look the same, or it looks like you just stepped out of a furniture showroom. Then what’s the point in having a designer?”

This often means opting for the unexpected. In the master bedroom, a plum-and-blue rug led the design, and Pehlke used those colors to make different pieces look cohesive. “It’s a very traditional rug, and I’ve used contemporary-style furniture on top of it,” she says. “I didn’t feel like I needed to use Granny’s chair just because it’s an old rug.” To achieve the desired look, Pehlke opted for two modern, neutral-colored chairs to juxtapose the antique rug, thus preventing the room from looking either too modern or too traditional.

This same philosophy applied to the light fixtures Pehlke used for the home’s foyer, which has a historical feel, thanks to its high ceiling and rounded doorway. “I really toned down the age of the building by using very contemporary light fixtures,” Pehlke explains.

While somebody walking in the door might expect antiquated lantern-style light fixtures in the foyer, they will instead see a multi-bulbed chandelier hanging from the ceiling and abstract sconces on both sides of the door. “They’re kind of a surprise,” Pehlke says of the lights.

Does this approach to design require a little bit of risk? Sure. But there’s no sense in decorating a home with too much caution; otherwise, a design could end up too boring.

“I take risk,” Pehlke says. “No matter what, in ten years, you’re going to want to change it anyway, or you’re going to be in a different house. Play a little bit,” she adds.

Such risks also might include the boldly striped wallpaper in the bathroom or the red-and-blue wallpaper in the powder room. There’s also the downstairs room Pehlke and her clients describe as “the wine room”: a spare bedroom set up as a lounge for enjoying drinks. Armchairs sit around an ottoman in the center of the room, and the closet is used to store wine fridges and wine glasses.

“Instead of this room downstairs that nobody uses, they have this room they actually go sit in all the time,” Pehlke says.

It just goes to show that bigger isn’t always better. When every room finds its perfect expression,
when bathrooms are lively and a guest bedroom becomes a wine salon, downsizing almost seems like an adventure.