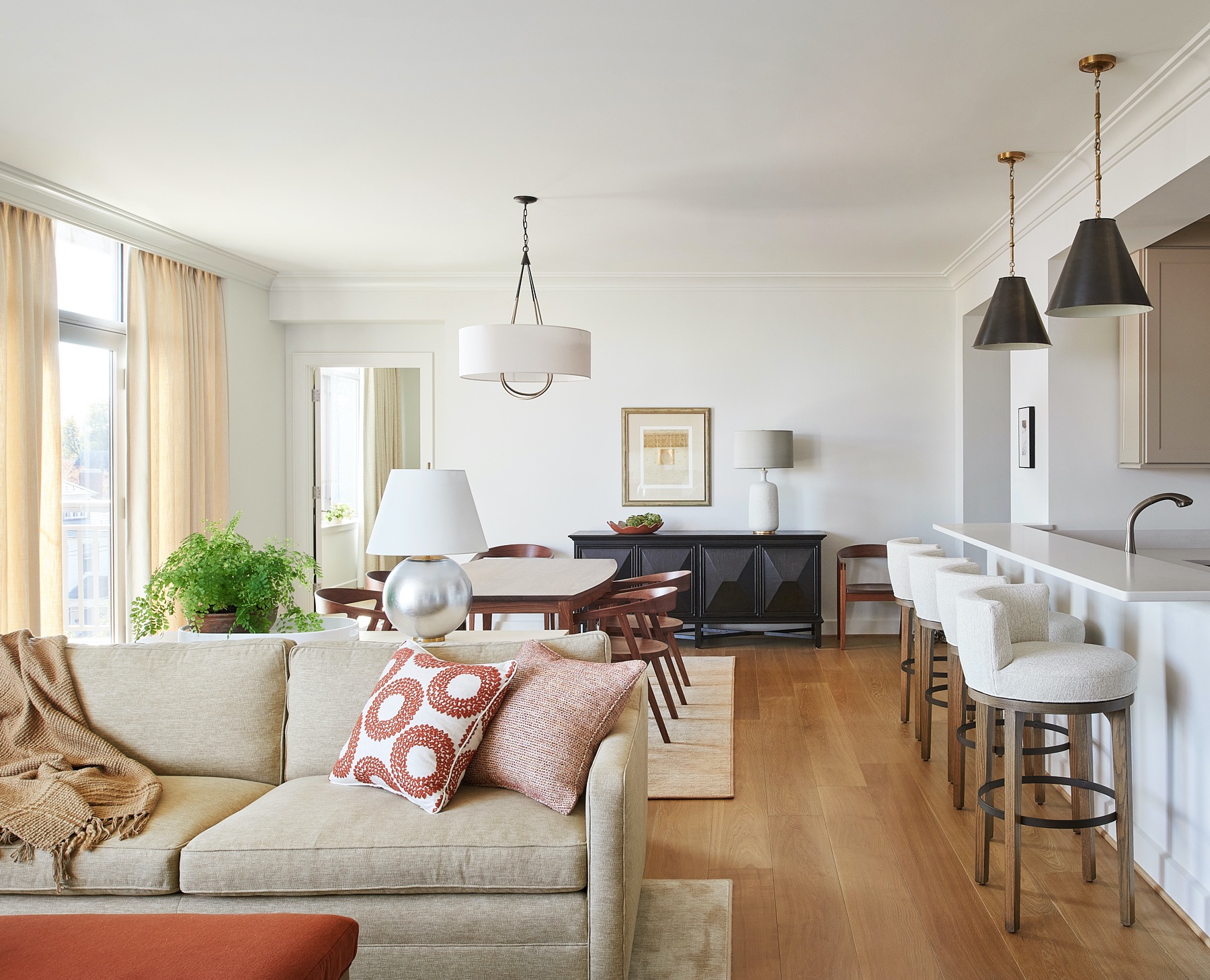 Outside the Annapolis condominium that recent downsizers Ken and Maureen Reightler now call home, it’s only a short walk to the U.S. Naval Academy or the historic downtown district. But step inside, and you’re looking at a home that pays tribute to a life of travel and moving around from place to place. It’s a home that designer Melissa McLay of Melissa McLay Interiors describes as a “cozy, eclectic mix of styles and materials,” all drawing inspiration from the art and novelties the Reightlers have collected throughout their adventurous life together.

The high school sweethearts married shortly after they graduated from college. While raising a family together, they traveled extensively both for fun and for business—to National Parks throughout the United States, as well as to Canada, Japan, Russia, Norway, Sweden, France, and many other countries around the world. Ken’s Navy career meant they moved frequently, so every few years, they were in a new city in a new state, making new friends and integrating into a new community.

In addition to their many travels, Ken is a seasoned astronaut who made several deployments to space after being selected by NASA in 1987. In speaking of their home, Ken says, “[It] reflects [our] lives, our experiences, the things we enjoy, the things we like looking at, the things that connect us to family and places we’ve been.”

The Reightlers’ condo is part of 51 Franklin Condominium, a complex developed and built by John Pilli and Matt Long, respectively—both USNA grads and longtime Annapolitans. Pilli was the developer, and Long, who owns Gate One Builders, did the execution. Once the administrative building for the Annapolis Hospital, 51 Franklin Condominium is now divided into nine residential units custom-designed for their owners—or close to custom-designed, at least. “You couldn’t change windows or do certain things that were uniform to the building, but we could do a different kitchen package or put an inside fireplace or do the bathrooms to whatever their custom designs were,” Long says. He describes Ken’s strong vision for his unit as “particular, planned, researched, thought-out to the nth degree on everything he picked out.”

As is appropriate for a couple who have traveled extensively and enjoyed so many experiences the way Ken and Maureen have, the finished design of the condo is eclectic and does not fit easily into any specific category. “I wouldn’t say there are modern elements in it. It’s slightly contemporary and transitional, but then there are traditional elements,” McLay says.

This can be seen in the home’s mix of metal and wood. Woven window treatments add texture and subtle color without distracting from the breathtaking view of Annapolis, and wallpaper around the fireplace gives depth to the room. Boucle fabric on the kitchen stools, along with pillow fabrics with a variety of thread colors, add texture and interest. “I find a space more interesting when you mix different looks and feels,” McLay says.

Downsizing to a condo feels natural for the Reightlers, who have frequently found themselves in small living quarters on their travels. Ken has not only made weeks-long trips to space; he has also lived aboard boats as an avid sailor, in cockpits as a pilot, and in tents as a camper. “Living in smaller spaces with less room has never been a problem for me,” he says.

And living on the top floor of the building means he and Maureen, a retired psychotherapist, get to look down on their view of Annapolis—it’s a way they love to view new cities when arriving by plane. “That’s part of what I really love about flying, being able to look down on cities from the airplane,” Ken says, calling the uninterrupted view of Annapolis the “greatest feature” of their home.

Nearly everything in the condo has a story behind it. The Thomas Moser chairs around the dining room table—replicas of chairs found in the Reading Room of the New York Public Library—pay tribute to Maureen’s love of reading. As bibliophiles, she and Ken had to pare down their collection of books before moving to Annapolis, so those on the built-in shelves around their living room are tomes of special significance, such as Maureen’s grandfather’s collected works of Shakespeare, published in 1911. One of the few traditionally Annapolitan elements in the home, the boat-top dining room table pays tribute to Ken’s love of sailing, which he still does competitively every other week from cities on the Eastern Shore. Memorabilia reflecting Ken’s 22-year career in the U.S. Navy are displayed around the built-in desk in the home office.

For McLay, creating an overall vision for the Reightlers’ home presented a new but welcome challenge. As the Reightlers weren’t moving in any furniture, she drew her inspiration entirely from their collection of treasures, many of which had nature-inspired colors like greens, grays, and reds, such as those seen in a framed piece of papyrus that Ken brought back from a carrier deployment.

The nature-inspired colors differ from the blues and creams that are so popular in Annapolis—colors McLay is used to working in. “It was nice to work in this earthy palette, and I have a whole new appreciation for that palette as a result,” she says.

One aspect she loves about these warm, earthy tones is the way they complement the natural beauty of the décor, including wood and textiles, like the creamy wool on the swivel chair or the burnt-orange alpaca mohair on the ottoman, both of which McLay describes as “very cozy and luxe.”

The finished effect is a home that’s unique: one that serves as a showcase of treasures garnered throughout a lifetime, a place that’s a cozy retreat from the outside world, a high-end residence that doesn’t constrict itself to any one style or aesthetic. You might even say it’s a home as interesting as the Reightlers themselves.